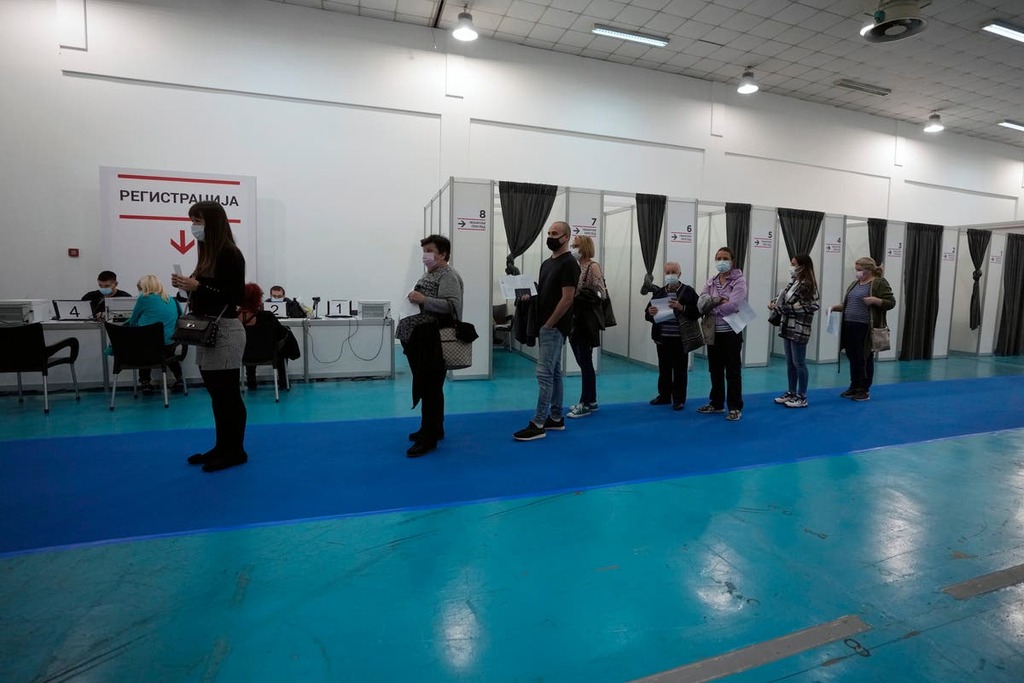 CONGRESS-DEBT — Senate Minority Leader Mitch McConnell said that he would not again help Democrats extend the government’s borrowing authority, raising fresh doubts about how Congress will avert a federal default when a temporary patch expires in December. SENT: 830 words photos.

UNITED-STATES-TALIBAN — Officials say senior Taliban members and U.S. representatives are to hold talks about containing extremist groups in Afghanistan and easing the evacuation of foreign citizens and Afghans from the country. It’s the first such meeting since U.S. forces withdrew from Afghanistan in late August. That’s when the U.S. ended a 20-year military presence and the Taliban took control of the country. SENT: 630 words, photo.

BIDEN-JOBS-ANALYSIS — President Joe Biden promised an economy that could be firing on all cylinders next year. But Friday’s disappointing jobs report suggests a slowdown in growth could loom atop voters’ minds in the 2022 elections. An AP News Analysis by Josh Boak. SENT: 995 words, photos.

CAPITOL BREACH-SUBPOENAS — President Joe Biden will not block the handover of documents sought by a House committee’s investigation into the Jan. 6 insurrection at the U.S. Capitol. This sets up a showdown with former President Donald Trump who has pledged to try to keep records from his time in the White House from being turned over to investigators. By Eric Tucker, Mary Clare Jalonick, Zeke Miller and Jill Colvin. SENT: 960 words, photos, video. With CAPITOL BREACH-SENTENCING — A federal judge says he hopes a three-month sentence behind bars in a Capitol insurrection case will send a message to other defendants who don’t seem to be “truly accepting responsibility.” SENT: 355 words, photos.

VIRUS-OUTBREAK — The number of Americans getting COVID-19 vaccine shots is nearing an average of 1 million per day. That’s a three-month high for the U.S., but still far below the last spring. The rise in shots comes as more seniors are getting boosters, and employer mandates are pushing more workers to take their first doses. Demand is expected to spike in a few weeks when elementary school age children can begin getting vaccinated. By John Seewer. SENT: 910 words, photos.

POLICE SHOOTING-WISCONSIN-KENOSHA — Federal prosecutors have announced that they won’t file charges against a white police officer who shot Jacob Blake in Wisconsin last year. Officer Rusten Sheskey shot Blake, who is Black, during a domestic disturbance in Kenosha in August 2020. The shooting left Blake paralyzed from the waist down and sparked several nights of protests. SENT: 575 words, photo.

VIRUS-OUTBREAK-CALIFORNIA-CRUISES — Cruise ships are returning to San Francisco after a 19-month hiatus brought on by the pandemic in what the city’s mayor says is sure to be a boost to its economy. SENT: 405 words, photos.

BRAZIL-VIRUS-OUTBREAK-SIX HUNDRED — Brazil has topped 600,000 virus deaths as it bids to return to pre-pandemic normalcy. Relief in both COVID-19 cases and deaths have been particularly welcome given experts’ warnings that the delta variant would produce another wave of destruction in the country with the second-most victims. SENT: 880 words, photos.

SUPREME COURT-BOSTON MARATHON BOMBING — The Biden administration will try to persuade the Supreme Court to reinstate the death penalty for convicted Boston Marathon bomber Dzhokhar Tsarnaev by arguing that a jury had no need to examine evidence that prosecutors themselves relied on at an earlier phase of the proceedings. By Mark Sherman and Alanna Durkin Richer. SENT: 1,040 words, photo.

ROBERT-DURST-WIFE-DISAPPEARANCE — A New York prosecutor will seek an indictment in the coming weeks against millionaire real estate scion Robert Durst for the death of his former wife, Kathie Durst, who disappeared in 1982. SENT: 770 words, photo.

CALIFORNIA-OIL-SPILL — An underwater oil pipeline off the Southern California coast was likely damaged by a ship’s anchor several months to a year before it ruptured and sent oil spewing into the ocean and then onto some of the area’s best-known beaches, investigators said Friday. SENT: 1,270 words, photos, videos. WITH: CALIFORNIA-OIL-SPILL-EXPLAINER — What’s happening with the California oil spill? SENT: 930 words, photos.

CALIFORNIA-ETHNIC-STUDIES — Along with English, science, math and other graduation requirements, California high school students will have to take a course in ethnic studies to get a diploma starting in 2029-30. SENT: 840 words, photo.

MURKOWSKI-DEATH-THREAT — A man upset over the impeachment of former President Donald Trump, illegal immigration and the direction he thinks the country is headed is accused of threatening the lives of Alaska’s two Republican U.S. senators in a series of profanity-laced voicemails that included saying he would hire an assassin to kill one. SENT: 920 words, photos.

VIRUS OUTBREAK — Russians are flocking to Serbia to receive Western-approved COVID-19 shots. Although Russia has its own vaccine, known as Sputnik V, international health authorities haven’t approved its use. That means Russians who want to travel freely need to show of having received a Western-made shot. SENT: 990 words, photos.

FRANCE-AUSTRALIA-SUBMARINES — France’s ambassador to Australia says Australian officials lied to his face and raised the risk of confrontation in Asia by crafting a secret submarine deal with the U.S. and Britain that undermined trust in democratic alliances. SENT: 625 words, photos.

CONGO-EBOLA — A case of Ebola has been confirmed in eastern Congo, according to the country’s Health Ministry and the National Institute of Biomedical Research, about five months after the country declared an end to the last outbreak that killed six people in the region. SENT: 200 words.

IMF-PROBE — The executive board of the International Monetary Fund said late Friday that it is seeking more “clarifying details” in its investigation into allegations that the head of the IMF pressured staff at the World Bank to change business rankings for China in an effort to placate that country. By Economics Writer Martin Crutsinger. SENT: 295 words, photo.

FINANCIAL-MARKETS — Wall Street capped a wobbly day of trading with a broad slide for stocks Friday, after a weak jobs report raised questions about the Federal Reserve’s timeline to pare back its immense support for markets. SENT: 780 words, photo.

FILM-LASHANA LYNCH — Lashana Lynch is the first Black woman to play a 00 agent. Not only that, in “No Time to Die,” she has inherited James Bond’s iconic code name, 007, with Daniel Craig’s agent out of the service. In an interview, Lynch discusses the meaning of her entry into the franchise and the painful social-media experience that followed. SENT: 780 words, photos.

ALDS-RED-SOX-RAYS — J.D. Martinez hit a tiebreaking, three-run homer in his return to the lineup and the Boston Red Sox backed Tanner Houck’s clutch relief effort with a franchise postseason record five home runs, beating the Tampa Bay Rays 14-6 to even their AL Division Series at a game each. By Sports Writer Fred Goodall. SENT: 770 words, photos.

NLDS-BRAVES-BREWERS — Rowdy Tellez spoiled Charlie Morton’s gem with a two-run homer in the seventh inning and threw out a runner at home plate, leading the Milwaukee Brewers over the Atlanta Braves 2-1 in the opener of their NL Division Series. By Sports Writer Steve Megargee. SENT: 855 words, photos.