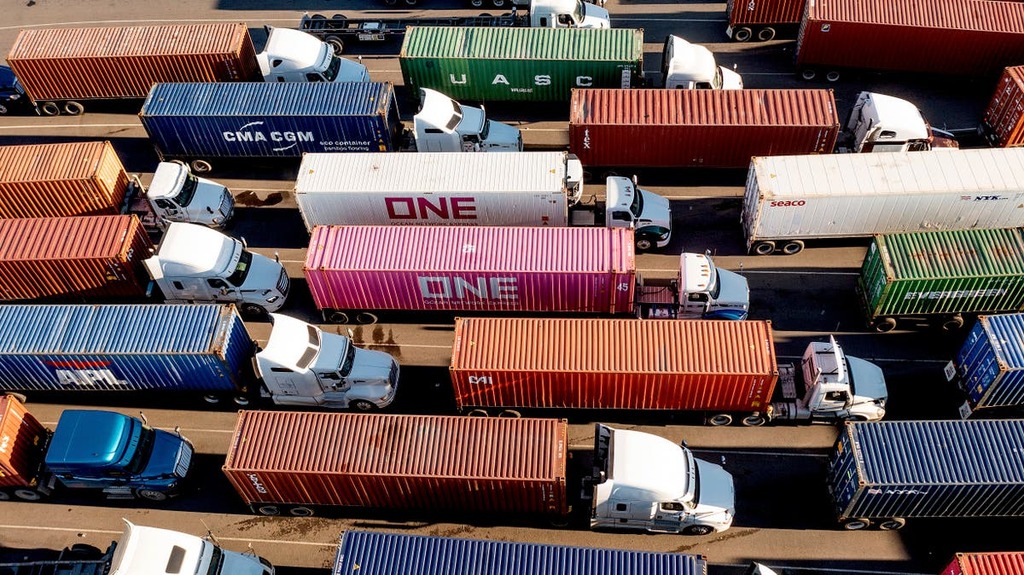 AP POLL-AMERICAN PRIORITIES — A new poll from The Associated Press-NORC Center for Public Affairs Research finds that management of the pandemic, once an issue that strongly favored President Joe Biden and his fellow Democrats is beginning to recede in the minds of Americans. The pandemic is increasingly overshadowed by concerns about the economy and personal finances, particularly inflation, which are topics that could lift Republicans. By Will Weissert and Hannah Fingerhut. SENT: 1,040 words, photo.

APARTMENT BUILDING FIRE - Hospitals worked Monday to save the lives of multiple people gravely injured by inhaling smoke in a fire that is already New York City’s deadliest in three decades. Dozens of people were hospitalized, and as many as 13 were in critical condition after Sunday’s blaze, which killed 19 people. Investigators determined that a malfunctioning electric space heater started the fire in the 19-story building. By David Porter, Caina Calvan and Michelle L. Price . SENT: 610 words, photos. UPCOMING: Developing. WITH: APARTMENT BUILDING FIRE-ESCAPES — Harrowing tales of escape have emerged after a fire broke out in a New York City apartment building. Rancid black smoke filled hallways, rising from floor to floor. SENT: 740 words, photos.

AUSTRALIAN OPEN-DJOKOVIC - An Australian judge has reinstated tennis star Novak Djokovic’s visa, which was canceled last week because he is unvaccinated. Circuit Court Judge Anthony Kelly also ordered the government to release Djokovic from Melbourne hotel quarantine within 30 minutes of his decision. The Australian government canceled the visa shortly after Djokovic arrived in Melbourne last week because officials decided he didn’t meet the criteria for an exemption to an entry requirement that all non-citizens be fully vaccinated for COVID-19. By Rod McGuirk and Mark D. Baker. SENT: 650 words, photos.

MYANMAR-SUU KYI — A legal official says a court in Myanmar has sentenced ousted leader Aung San Suu Kyi to four more years in prison after finding her guilty of illegally importing and possessing walkie-talkies and violating coronavirus restrictions. Suu Kyi was convicted last month on two other charges and given a four-year prison sentence, which was then halved by the head of the military-installed government. SENT: 950 words, photos.

RUSSIAN-UNITED STATES-TALKS — Senior U.S. and Russian officials are formally launching special talks on strategic stability as part of a flurry of diplomatic activity in Europe this week aimed at defusing tensions over a Russian military buildup on the border with Ukraine. SENT: 250 words, photos. WITH: RUSSIA-US SECURITY TALKS-EXPLANER (sent)

CONGRESS-ELECTION BILLS — Democrats are mounting an impassioned bid to overhaul Senate rules that stand in the way of their sweeping voting legislation. They argue dramatic action is needed to counteract dark forces unleashed by Donald Trump’s falsehoods about the 2020 election. By Brian Slodysko. SENT: 1,090 words, photos.

ISRAEL-PALESTINIAN-IDS — Israel has granted residency rights to thousands of Palestinians in the occupied West Bank and in the Gaza Strip after years of legal limbo. The residency allows people to get an official ID number and passport. Without this official status, it is impossible to travel abroad and difficult to obtain many services. By Wafaa Shurafa SENT: 980 words, photos.

VIRUS OUTBREAK-INDIA BOOSTERS — Healthcare and front-line workers along with people above age 60 with health problems are lining up at vaccination centers across India to receive booster shots as infections linked to the omicron variant surge. SENT: words, 720 photos.

VIRUS OUTBREAK-CHICAGO SCHOOLS -Chicago school leaders are canceling classes for a fourth day in the nation’s third-largest school district, taking the dispute with the teachers union over remote learning and COVID-19 protocols into another week. SENT: 740 words, photos.

0BIT-BOB SAGET — Bob Saget a comedian and actor best known for his role on the sitcom “Full House,” has died. He was 65. SENT: 890 words, photos. WITH: OBIT-BOB SAGER-REACTION (sent)

YANKEES-BALKOCEV — The New York Yankees are promoting Rachel Balkovec to manager at Low A Tampa, making her the first woman to skipper a team affiliated with Major League Baseball, according to two people familiar with the move. SENT: 108 words, photos.

BRITAIN-JUBILEE — The United Kingdom will celebrate Queen Elizabeth II’s 70 years on the throne with a military parade, neighborhood parties and a competition to create a new dessert for the Platinum Jubilee. SENT: 330 words, photo.

ISRAEL-NETANYAHU-OLMERT — Two former Israeli prime ministers are facing off in a Tel Aviv courtroom as Benjamin Netanyahu’s defamation suit against Ehud Olmert gets underway. Netanyahu, his wife and son appeared in the Tel Aviv Magistrate’s court Monday for the opening of their case against Olmert, Netanyahu’s predecessor as Israel’s prime minister. SENT: 230 words, photos.

VENEZUELA-ELECTION - Twice in less than two months, Venezuela’s opposition has prevailed in the gubernatorial race in the home state of the late President Hugo Chávez, with the results giving hope to that faction while shocking the ruling party. SENT: 730 words, photos.

HONDURAS ACTIVIST KILLED — Police in Honduras say a local leader of the indigenous Lenca group has been shot to death. Officials say Pablo Isabel Hernández was shot to death Sunday on a dirt road near the town of San Marcos de Caiquín as he headed to a local church. Police spokesman Cristian Manuel Nolasco says the ambush may have been related to personal or political disputes. SENT:260 word.

GOLDEN GLOBE AWARDS - Even though NBC dropped the 2022 Golden Globe Awards, the embattled Hollywood Foreign Press Association proceeded with its 79th edition Sunday night without a telecast, nominees, a red carpet, a host, press or even a livestream. Members of the HFPA and some recipients of the group’s philanthropic grants gathered at the Beverly Hilton Hotel for a 90-minute private event Sunday. SENT: 810 words, photos. WITH: GOLDEN GLOBES AWARDS-LIST (sent) The AP does not expect to be able to publish photos or video of the awards.

PANTHER-BUCCANEERS — Tom Brady topped 5,000 yards passing for the second time in his career and the Tampa Bay Buccaneers set a franchise record for regular-season victories with a 41-17 win over the Carolina Panthers. SENT: 980 words, photos.