AOC’s guide to getting noticed at parties: drape yourself in the garments of class war 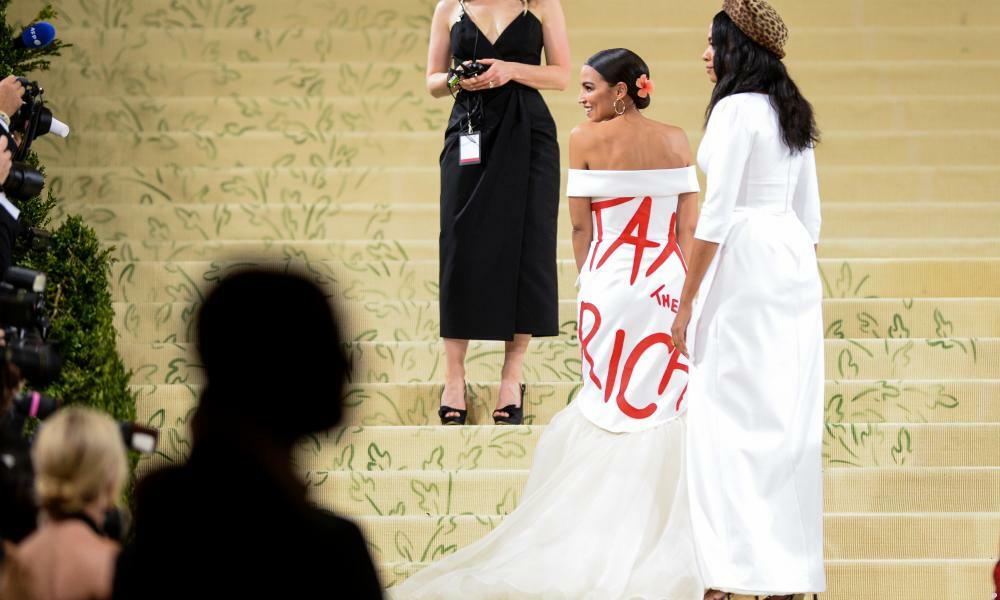 Alexandria Ocasio-Cortez was not the only celebrity to take a political statement as her date to the Met Gala. The actor Cara Delevingne celebrated the “American Independence” theme of the visually dazzling annual ball in a vest that read “Peg the Patriarchy”. The US congresswoman Carolyn Maloney was resplendent in a “suffragette gown” made of trailing “Equal rights for women” banners. The actor Dan Levy donned Aids-era queer art. The Trump-baiting football megastar Megan Rapinoe carried a dainty purse embossed with the words “In gay we trust”.

But it was AOC in a slyly bridal white Aurora James dress who made the most impact of the evening. James is an immigrant to the US, a black woman who built her brand from hard-work beginnings, selling her clothes in Brooklyn’s neighbourhood markets. Yet the congressional representative from New York’s 14th district bared her shoulders above James’ orchid-like couture creation not merely as a celebration of local effort and enterprise. The back of AOC’s gown came adorned with the words TAX THE RICH in the red Pantone shade “Beheaded Capitalist”.

The backlash was instant and glorious. It was something of a delight to watch the US right prioritise a conniption about economic redistribution over so many immediate visible opportunities to be sexist and homophobic. Then again, the theme of “America” has always been implicitly twinned with “money” and, while capitalism happily finds markets to exploit among girls and queers, collectivised wealth has never been the radical chic it prefers to embrace.

A symbolic case in point is the Metropolitan Museum of Art, the host and beneficiary of the Met Gala. It’s a taxpayer-funded institution, legislated into existence to serve a century-old mission to “be kept open and accessible to the public free of all charge throughout the year”. Yet its famous Costume Institute must fundraise for itself, hence seeking voluntary contributions from rich people in the form of $35,000-a-head tickets to this disgusting, decadent, fabulous Met Gala annual party. This week’s event raked in $16.75m.

There are those who condemn the fatuous, end-of-empire-level-indulgence event that sees Debbie Harry turn up as a floating ribcage while the more-money-less-talent Kardashian women conspicuously underwhelm on the couture front every year. I am not one of them. I say let the rich eat all the cake they want if paying for it means a kid from a poor community can experience, for free, the transformative joy of an accessible art museum. Or get care in a hospital. Or go to school. Find any way at all to squeeze the money out of them – indeed, this is the very principle of taxation.

How lovely to see in the photography of a celebrity gala event that it’s a principle shared by AOC, whose dress was not actually a performance of faux activism but a press release in the form of wearable art summarising the activism she has made meaningful where it matters. The seismic leftward shift she’s effected on Democratic party politics and the political discourse beyond it has provided Joe Biden the vanguard for leftist policy ambition unthinkable to decades of party predecessors. It was the new US president – not AOC – who published on social media on Tuesday: “A teacher shouldn’t pay more in taxes than an oil company. We’re going to cut taxes for the middle class by ensuring the wealthy and large corporations pay their share.”

I adore AOC. Not merely for her meticulous congressional preparation and policy work, her skilled questioning, or her Jacinda Ardern-like ability to calculate the most impactful ratio of ideological purity to ruthless pragmatism – remember, AOC did not waste her radical progressivism on a doomed minor-party project, but brought it with her to the centre of real power. I also adore her because she pre-empted criticism of her Met Gala appearance with a quote from Marshall McLuhan, the brilliant Canadian media theorist who predicted the internet back in the 1960s. Those awed by AOC’s adept use of social and other media to brand, communicate and radicalise others may wish to consider that she may have absorbed something of use from the man who pointed out “sheer visual quantity evokes the magical resonance of the tribal hoard”.

In this way, she imparts in her person a specific instruction to urban young women desperate to be noticed, and yet overwhelmed by inaccessible standards of celebrity glamour, surgical beauty and unaffordable livery on show at the Met Gala. It’s “before you order the dress, do the reading”.

There’s always one surefire way to get noticed at parties and it isn’t rocking up in a dress made from sequinned pantyhose, or aping the style of one of those 1970s dolls with big skirts that used to decorously cover the toilet paper. It’s to arrive AOC-style – in the blood-spattered garments of fighting class war.