'Anything is possible' in Raducanu's US Open fairy tale 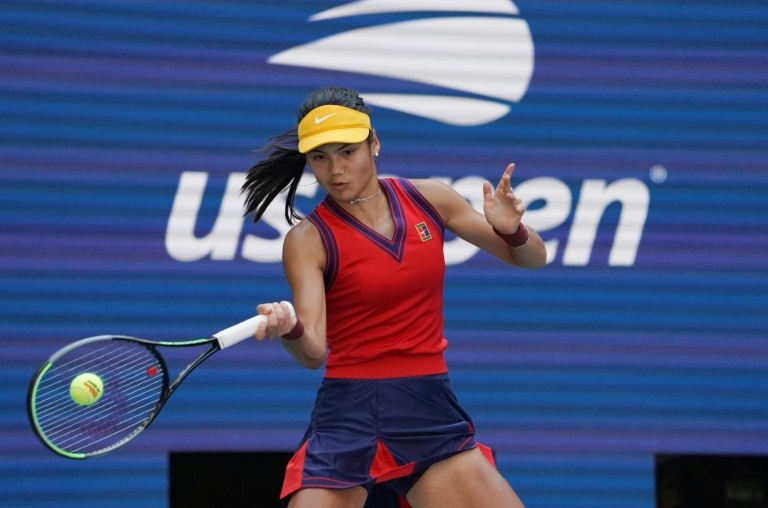 New York (AFP) - Emma Raducanu, an 18-year-old British qualifier, is living a US Open dream as astonishing as anything one might see down the road on Broadway.

She's only the fourth qualifier in Grand Slam history to reach the semi-finals, but Raducanu still resists comparisons to such stars as Naomi Osaka.

"I think to compare yourself and your results against anyone is probably like the thief of happiness," Raducanu said.

"I didn't compete for 18 months, but here I am and it just shows that if you believe in yourself, then anything is possible."

Raducanu could become the first qualifier to reach a Grand Slam final, and from there a trophy is only one step away, even though she insists on never looking ahead.

"Let's say I have a hunger to win every single match I play," Raducanu said."So I don't want to get ahead of myself at all, because I just like to take it one day at a time.

"If I take care of what I can control, that's going to give me the best chance.Until now, I think it's worked very well for me not getting ahead of myself, just focusing on one point at a time.It's got me to this stage, and I'm not going to change anything."

That includes her red attire on court.

"It's not the same set, to be clear," Raducanu said."I just really like the color red."

It hasn't been a bad couple of weeks for a woman who planned to pack her bags for a much earlier exit.

"I didn't expect to be here at all.I think my flights were booked at the end of qualifying, so it's a nice problem to have," Raducanu said.

"I've just been focusing one day at a time, taking care of each day.When you're playing tournaments, you just get into this sort of autopilot mode of your routines, recovering on the day off in between."

"All are such great role models and figures for me to follow," she said."I think that their presence and everything they've achieved is inspiration in itself for me."

Raducanu made her Grand Slam debut with a run to the fourth round at Wimbledon in July and followed with WTA events in San Jose and Chicago.

"I worked my way up to this level gradually but, yeah, the amount of matches I have had has really helped with my confidence," Raducanu said.

She's most pleased with improving her court movement at the Open.

"Physically I would say I'm not 100% developed yet, but my speed and ability to get to some of the balls has definitely surprised me," Raducanu said.

"I've started sliding, which I didn't know I could do actually, and I kind of do it by accident now.I've always wanted to learn how to do it, but now I can."

She credits her parents with the mental toughness that has been her trademark in clutch situations.

"The calmness and the mental strength definitely comes from my upbringing," Raducanu said.

"I'm pretty relaxed.I trust myself and it's all mental at the end of the day."