Any publicity is good 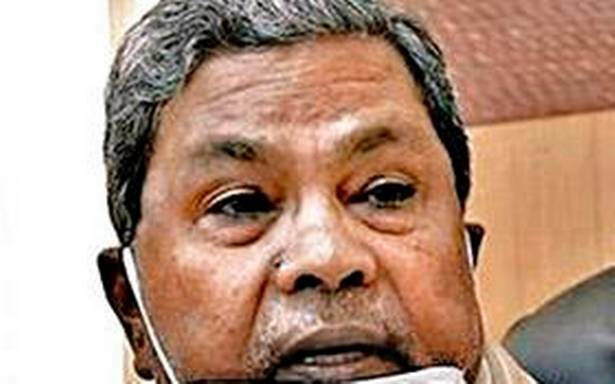 Former Minister S.R. Mahesh (in picture) is at loggerheads with IAS officer Rohini Sindhuri, who has accused him of indulging in land-grabbing in and around Mysuru. It appears that the JD(S) MLA representing K.R. Nagar Assembly segment, who also dabbles in real estate ventures, finds them a blessing in disguise.

He believes that the media attention that began coming his way ever since Ms. Sindhuri (who had served as Deputy Commissioner of Mysuru till she was transferred earlier this year) accused him of land encroachment, had surpassed the publicity accorded to him even when he served as Minister in the JD(S)-Congress coalition two years ago. The icing on the cake, however, is the increase in demand for renting his marriage hall in Mysuru, which is at the centre of the IAS officer’s allegations. Mr. Mahesh claimed that the hall has been written about and shown so much in the print and electronic media in recent times that there has been a substantial rise in inquiries about its availability.

Off with the phones

Officials find many ways to avoid the public and not listen to their grievances, switching off mobile phones being one of the most effective. Officials put this strategy to test recently in Hassan. The State government has imposed restrictions on drilling new borewells for private use. Officials received a call complaining about someone drilling a borewell and the officer stopped the man on that day. This angered the person, who sent out a word that he would not allow anyone to stop him from drilling the borewell. Officials were not ready for further confrontation, given the political influence the person enjoyed. So, on the day he was to resume drilling the borewell, they switched off their mobile phones in order to avoid receiving public complaints. One of them even conceded off the record: “The public can blame us only if we don’t act on receiving complaint. But nobody can blame us if we don’t receive it in the first place.”

Two politically dominant castes – Lingayats and Vokkaligas – seem to be united in opposing Karnataka Backward Classes Commission’s report on caste census conducted during the Siddaramaiah-led government. The Congress is believed to be divided on the issue, and within the party, legislators belonging to the Lingayat and Vokkaliga communities have expressed their opposition to acceptance of the report. They claim that the party would lose the support of both communities if it made a demand for acceptance of the report. JD(S) leader H.D. Kumaraswamy too has opposed the report and asked why Mr. Siddaramaiah (in picture) did not accept it when he headed the government.

Apparently, the two communities have been against the acceptance of the report by the BJP government now or making the data public, reportedly for the fear of losing their dominance in politics.

A few have claimed that population of other backward castes, SC/STs and Muslim community is greater than what is estimated and official announcement of data would make hitherto dominant communities vulnerable in the political domain. More than ₹150 crore tax payers’ money spent on conducting the caste census would go waste if it is not made public.