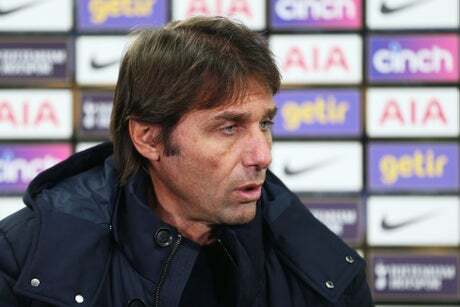 Tottenham head coach Antonio Conte has revealed he has made his recommendations to Daniel Levy and Fabio Paratici for the January transfer window and says it is now down to the club to "take the best decisions".

Conte asked the club for two months to assess the level of his squad and says he had a “good meeting" with Levy, the Spurs chairman, and managing director Paratici.

Among the players who could leave Spurs this month are Steven Bergwijn and Tanguy Ndombele but Conte insisted he was counting on the Dutch forward, while refusing to publicly comment on Ndombele’s situation.

Conte placed the emphasis on Levy and Paratici to act on his recommendations in the market, saying the club would have “the last word” on transfers.

“We have spoken about the situation. It was a good meeting,” Conte said on Tuesday. "The owner [Levy] and Paratici started this season together.

“I arrived in the middle of the season and they know the situation much better than me. It was a good meeting to speak and tell them my thoughts after two months in Tottenham.

“It’s OK. I repeat, I can give a lot of work to clubs I worked at in the past and now in the present. I can give this and then the decisions are for the club, not for me. The last word is always for the club.

“My way in this moment is to coach my players and improve the level of the squad. Then we’ll see the decision of the club, if we want to improve in other aspects or not. If there’s the possibility or not. For me, to be honest, it’s the right way with the club [regarding] my vision, my expectation and what I have found. And the way we can improve.”

Bergwijn is the subject of interest from Ajax, who have seen a bid of €18million (£15m) rejected, but Conte suggested the winger has a future at Spurs, saying the 24-year-old is unique in his squad.

“Honestly, Bergwijn he knows very well what I think about him,” Conte said. “I consider him a player that can play in all three roles. As a No9 and as a No10. For sure, in my period at Tottenham, he was injured for a long time but I showed him that when he’s in a good physical condition, I gave him a chance to show he’s a good player.

“For sure, Bergwijn is a Tottenham player and he’s very close to coming back. After the game against Chelsea, he can start having training sessions with us. I count on him. He’s a player with different characteristics to [Heung-min] Son, Lucas [Moura] and Harry [Kane]. He’s very good one-v-one, he’s a creative player that we don’t have in our squad.”

The Italian was less effusive about Ndombele, who was booed off the pitch by sections of his own fans as he was substituted in Sunday’s FA Cup win over Morecambe.

The boos started as Ndombele walked off the pitch, with Spurs trailing 1-0 to the League One side, and the Frenchman headed straight down the tunnel.

“Honestly, I think it’s not right to speak about this type of situation. I think everyone is the owner of his gestures, you understand?" Conte said.