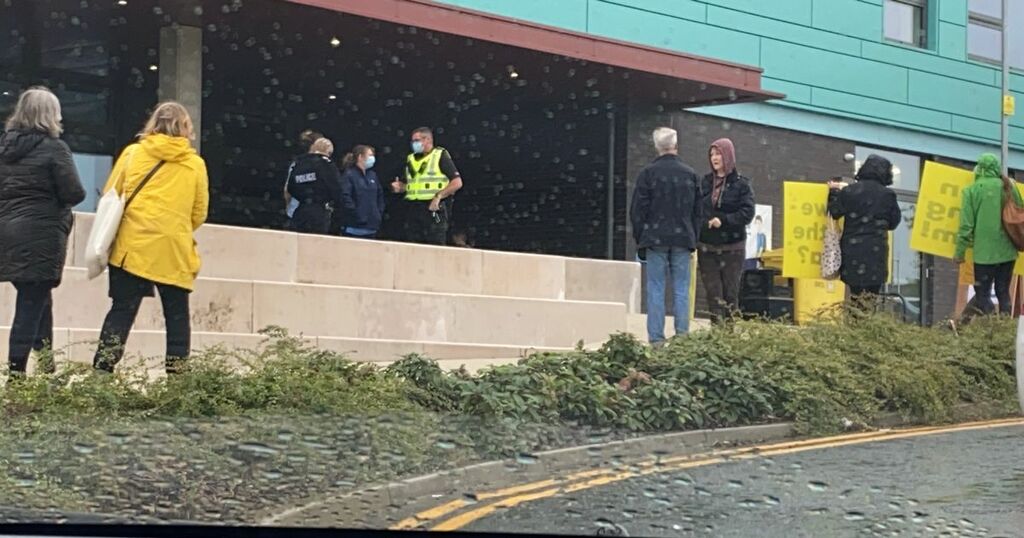 Anti-vax protesters have been accused of “intimidation” after ambushing teenagers and pensioners outside a Covid vaccination centre.

Placard-waving activists formed a picket line at Queen Margaret Academy in Ayr, where teens and adults were jeered and abused as they entered.

Police were called as NHS staff were forced to confront the protesters to allow people to enter the school – which is being used as a temporary vaccine centre.

The “shocking” scenes have prompted a call from MSPs for them to end their campaign – described by Lib Dem leader Alex Cole-Hamilton as “a danger to public health ”.

One angry parent told how she looked on in horror as a female protester chased a woman down the steps outside the school shouting abuse at her.

She said: “The protesters were there trying to stop teenagers being vaccinated for Covid but the vast majority of the people attending to get the jag were older and had to run the gauntlet of this group acting in an intimidating way to them.

“The NHS staff bravely came forward to move the protesters back to allow people entering and leaving the building
unhindered but soon had to call for the assistance of the police who arrived to move them further from the school buildings.

“It was shocking to see one female chase an elderly woman down the steps and shouting at her.”

The protesters turned up in a bid to object to the Scottish Government’s programme to give the vaccine to 12 to 15-year-olds.

They were carrying signs which read: “When teens dying of Covid-19 is rare.”

She said: “The behaviour of these protesters is extremely irresponsible and quite shocking that they’re trying to stop people from getting the vaccine.

“Vaccination is a personal choice and nobody should be stopped from getting it.

“People shouldn’t have to put up with this kind of behaviour and as well as being upsetting for those attending to get the vaccine, it’s also wasting valuable police time when they could be needed elsewhere.”

He said: “They should be utterly ashamed of themselves and are completely wrong in everything they stand for. It’s hard enough trying to ensure our teenagers are supported enough in knowing as much as possible about the vaccine in order to make a decision about having it.

“Once they’ve made the decision to take advantage of the treatment, they shouldn’t have to deal with crossing this delusional picket line. Vaccines are our best hope for getting out of this pandemic and anyone who says otherwise is dangerously misguided.”

NHS Ayrshire and Arran consultant in public health, Dr Elvira Garcia, said the clinic was able to proceed as planned after police arrived.

A police spokeswoman said: “Officers attended a demonstration at Dalmellington Road in Ayr on Saturday. Suitable advice was given and no one was arrested.”

Recent Covid data shows that more than a third of 12 to 15-year-olds in Scotland have received a coronavirus jag.

But despite the success of the vaccine in bringing down fatality and infection rates, shadowy anti-vaccine groups have been increasingly active in Scotland.

Their activities prompted First Minister to condemn their “misinformation” campaign. In her SNP conference speech last month, Nicola Sturgeon said a “small, but noisy minority” were responsible for raising “fear” about vaccinations and were “putting the health and wellbeing of the country at risk”.

Last month, anti-vaccine protesters opposed to the rollout of Covid-19 vaccine for children aged 12 brought traffic to a standstill on the M8.

The campaigners’ demonstration affected the motorway near the Pyramid Business Park at Bathgate,
West Lothian.

A large vaccination centre is located in the area.