Anti-bullying agency Netsafe apologises to government but not to victims

The Ministry of Justice summoned Netsafe leadership to Wellington for a 'please explain' meeting about whether it could retain confidence in the anti-bullying agency.

It comes after Newsroom revealed staff complaints of bullying within the agency, against former chief executive Martin Cocker and another manager, his wife Angela Boundy. The inquiry into Cocker was cut short when he quit at short notice; Boundy remains on leave five months after the inquiry found against her.

Documents released under the Official Information Act reveal mounting concerns about the agency's conduct and processes, about whether its financial difficulties will compromise its ability to deliver $4 million a year in government contracts, and about its repeated failure to disclose employment issues.

► The agency has apologised to the Government for failing to tell officials it was shutting down its research unit, which was critical to its delivery of public services, and laying off staff. Instead, officials learned of it from a Newsroom article;

► Despite its apology to the Government, Netsafe has still not apologised to three women whose details it disclosed to their convicted criminal stalker; the Human Rights Review Tribunal ordered it pay $100,000 compensation to the abused women;

► As a result of costs including another $500,000-plus in legal and employment inquiry fees, the agency has blown its budget. It's signalled it will be asking the Government for a top-up to deal with additional complaints under the Harmful Digital Communications Act, beyond what was budgeted.

Victims adviser Ruth Money is connected to the stalker victims who won compensation after Netsafe breached their privacy. Speaking as an advocate, she observed Netsafe was willing to apologise to the Government, but there had been no apology to the women whose privacy it breached, contrary to what the justice minister said.

Netsafe's contracts with the justice and education ministries have been extended through as far as 2026, in one case. Its five-year statutory appointment as the agency responsible for investigating complaints under the Harmful Digital Communications Act was renewed last year, without being advertised.

“The purpose of this meeting is to understand ... what – if any – additional changes might be needed to retain confidence in Netsafe as the approved agency.” – briefing to Minister of Justice

"As noted in media coverage of the Tribunal’s decision, Netsafe has commissioned three independent investigations into employment matters during the past year," the briefing says. "One was a general investigation into the work culture at Netsafe. A second investigation responded to specific allegations of bullying by several staff against the former chief executive, Martin Cocker, and another manager, Angela Boundy (who is also his wife)."

It reiterates a continued theme of Netsafe refusing to disclose information, or disclosing it only late and under duress. "The Ministry has not yet seen these independent reports and has a limited understanding of their contents and conclusions."

Netsafe has told the Ministry of Justice and Newsroom that it won't disclose the outcomes of its string of employment disputes, or how much it paid to to settle them.

The briefing says Netsafe’s acting chief executive Andrea Leask and board chair Colin James were invited to a meeting to explain.

"The purpose of this meeting is to understand how Netsafe has responded to the Tribunal’s decision, what has improved due to the specific changes implemented during the last five years, and what – if any – additional changes might be needed to retain confidence in Netsafe as the approved agency.

"In particular, the Ministry will seek reassurance about Netsafe’s ability to safely and appropriately handle situations involving domestic violence; and operate in ways that do not retraumatise people who it is meant to protect. The Ministry will also seek to understand if there is any risk to services arising because of its reported financial difficulties."

Paul Goldsmith welcomed the new scrutiny of Netsafe, its management, service delivery and finances, but said it shouldn't have taken so long for the Government to listen to concerns. "It's been very lackadaisical," he said. "They've finally got around to meeting them and now they're asking about details of expenditure.

"But they should have already been carefully monitoring such significant contracts. The impression one gets is that they're not paying anywhere near as much attention as they should. It feels as if someone on a desk somewhere just rolled the contract over."

Netsafe has appointed a new chief executive, Brent Carey, who started this month. He too is refusing to answer questions, or to hand over documents that the agency agrees it is legally bound to disclose to Newsroom under the terms of the Official Information Act.

The continued secrecy and refusal to comply with statutory requirements and ministerial demands for information is arousing official concern about what the agency is hiding - hence this week's demand for a line-by-line breakdown of its spending.

The Ministry of Justice is also seeking advice from its Office of Legal Counsel about options available under the service agreement with Netsafe, the ministerial briefing says, "which may include a formal investigation into Netsafe’s conduct and processes".

Ministry officials are also working and coordinating with their counterparts at the Ministry of Education, which contracts Netsafe to provide learning services about staying safe online.

Crafar referred Minister of Justice Kris Faafoi to three Newsroom articles for further details, and promised him a follow-up briefing: "This update will include information about what Ministry officials knew and when, including the extent of matters set out in this decision."

This week, Faafoi refused to express confidence in Netsafe's performance and leadership, when asked by Newsroom.

"As part of the process for renewing Netsafe’s appointment as the approved agency, Ministry of Justice officials reviewed Netsafe’s suitability for appointment," he said. "A new performance measure will be reported to Cabinet annually through the annual estimates reporting, that focuses on the satisfaction of complainants with the Netsafe service, in order to provide an understanding of the value to complainants of the Netsafe service. Netsafe are currently on track to meet or exceed the target for this measure."

Faafoi said Netsafe's breach of the three women's privacy dated back to 2017, though the legal processes only culminated in a Human Rights Review Tribunal decision last month.

Netsafe had confirmed "a comprehensive list of changes" to policies and processes had since been implemented. These were about communications, development of standard operating procedures, training for staff in how to recognise and respond to family violence, and strengthening relationships with external stakeholders within the family violence sector.

Faafoi said: "Netsafe has taken responsibility for what happened, both by apologising to the individuals involved and working with the ministry to demonstrate the changes it has made since the events that led to this case."

But it appears he and his officials may have been misled. Ruth Money reiterated that no apology had been received.

Faafoi said his ministry had reminded the agency of its contracted obligation to advise the minister of anything that could affect its ability to deliver its services.

"The ministry expressed its disappointment to Netsafe that it failed to notify the ministry of its intent to close the research and policy unit," he said. "Netsafe has apologised for this oversight.

Officials remained satisfied Netsafe was delivering the services it was contracted to provide. "As with any organisation that receives Crown funding, the ministry would expect that Netsafe comprehensively responds to and investigates serious matters that may jeopardise Netsafe’s ability to deliver a quality service. This includes claims of bullying or harassment against senior staff, or allegations that Netsafe has breached the Privacy Act."

► Update: In response to further Newsroom questions, Faafoi says the Ministry is satisfied Netsafe is delivering the services it is contracted to provide. "As with any organisation that receives Crown funding, the Ministry would expect that Netsafe comprehensively responds to and investigates serious matters that may jeopardise Netsafe’s ability to deliver a quality service."

He says the Ministry has "no current plans" to conduct a formal investigation into Netsafe, to his understanding. "The Ministry continues to work closely with Netsafe to ensure that it is confident that Netsafe is responding appropriately to the issues that have been raised.

"Netsafe have not advised the Ministry of a risk to Netsafe’s operating expenditure. Netsafe have advised the Ministry of a risk that the volume of complaints received under the Harmful Digital Communications Act for the 2021/22 financial year will exceed the upper limit specified in their service agreement. As per the service agreement, the Ministry is required to consider whether an additional payment is necessary. No additional payments have been made to date in this financial year."

Correction: A previous version of this article said the Ministry of Justice had asked Netsafe for a detailed breakdown of its expenditure of public funds. In fact it was conveying the request on behalf of an Official Information Act applicant. 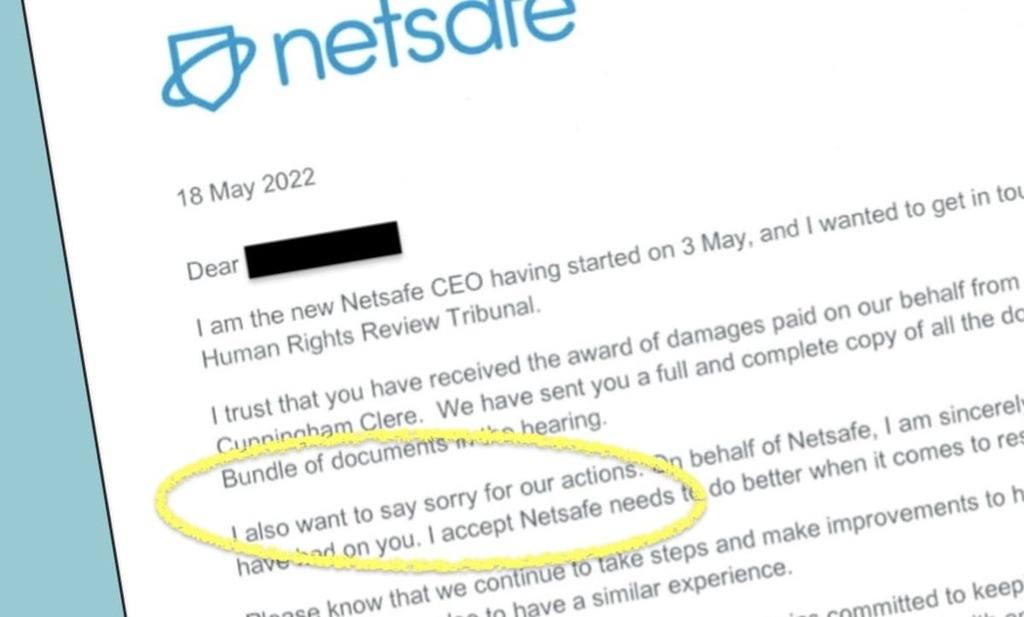 'Nothing has changed': Victim's acerbic response to belated Netsafe apology
Netsafe wrongly told the Govt it had apologised to three women whose private information it supplied to a criminal stalker.…

Newsroom.co.nz
From analysis to the latest developments in health, read the most diverse news in one place.
Isle of Man medical director faced ‘disgraceful’ bullying, tribunal finds

The Guardian - UK
Questions over transfer of $1m public funding