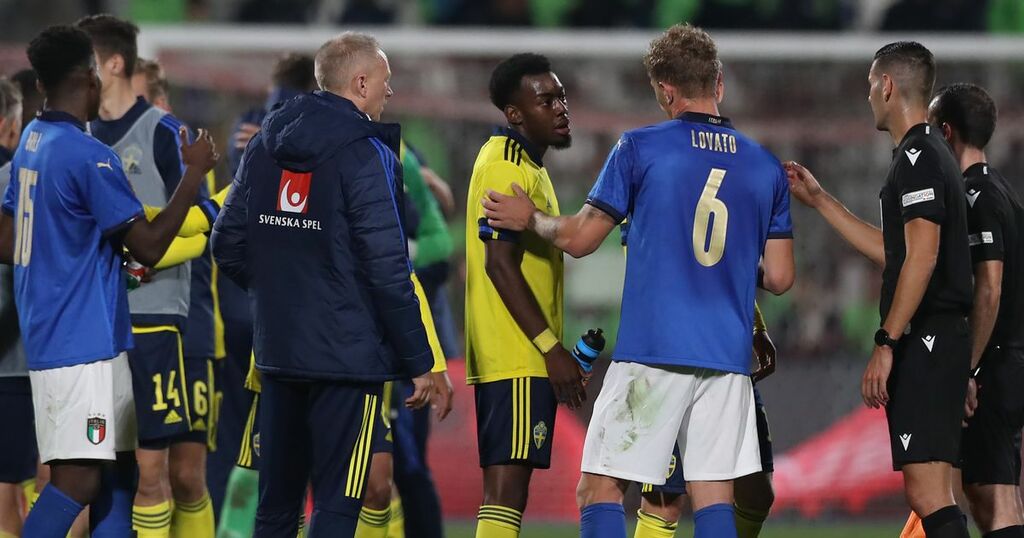 The Manchester United starlet stated after the match in Monza that an Italian Under-21 player made a racist comment towards him.

Swedish FA chefs have confirmed that a report has been sent to both referees and the match delegates and that they are now awaiting feedback.

It is unclear when the incident occurred, however at full-time there was an incident involving both teams which began on the field and descended down the tunnel.

Elanga was clearly distraught and was pulled away by the referee while he has received support from his manager.

Sweden Under-21 boss Claes Eriksson said: "We have told our version of what happened and have submitted an oral report to both the referees and the match delegates.

"We are now waiting for feedback through the match report and the referee report. Once they have arrived, we decide how to proceed.

"Safety manager Martin Fredman is also informed of what has happened."

He added: “No one should have to be exposed to racism, it is completely unacceptable. We all stand behind and support Anthony in this.”

Elanga had received a booking for goading fans with his celebration after Tim Prica had equalised in the last minute.

The Italian FA (FIGC) have now released their own statement denying that any Italian player made a racist insult towards an opponent.

“Hoping that the competent authorities will clarify the situation quickly, you can clearly see from the footage that after the 92nd minute goal, two Swedish players carry on their celebrations for a long time and are urged by the Italian players to resume the game.

“We reiterate that no racist insult was pronounced before, at that moment or afterwards and the FIGC will act to protect its image and that of its players in any court.”

The incident in Italy comes as FIFA has condemns the disturbances which marred England’s World Cup qualifier against Hungary, and the violent scenes at the Albania v Poland match in the same group.

The Metropolitan Police confirmed that a man has been arrested on suspicion of racial abuse, seemingly directed at a steward, at Wembley.

In a statement, the Met said: “Shortly after the start of tonight’s match at Wembley, officers entered the stand to arrest a spectator for a racially aggravated public order offence following comments made towards a steward.

“As the officers made the arrest, minor disorder broke out involving other spectators. Order was quickly restored and there have been no further incidents at this stage.”

The FA said: “We are aware of an incident in the away section during tonight’s FIFA 2022 World Cup Qualifier at Wembley Stadium.

"We will be investigating and will report the incident to FIFA.”

“FIFA strongly condemns the incidents at England v Hungary and Albania v Poland and would like to state that its position remains firm and resolute in rejecting any form of violence as well as any form of discrimination or abuse. FIFA has a very clear zero-tolerance stance against such abhorrent behaviour in football.”

England players were subjected to racist abuse in their 4-0 win over Hungary during the corresponding fixture last month.