Anthony Albanese, the only child of a single mother who was raised in a working-class neighbourhood of Sydney, has led his Labor Party to victory in the national election in Australia, ending nine years of conservative rule.

The opposition Labor party with 72 seats is yet to gain a parliamentary majority in the 151-member parliament, as the counting of votes is still under way.

“The Australian people have voted for change. I am humbled by this victory,” the 59-year-old Labor leader told his supporters in Sydney.

Albanese, nicknamed “Albo”, will be sworn in as prime minister after his Labor party claimed its first electoral win since 2007.

He has promised big changes after nearly 10 years of conservative rule, from stepping up climate action to boosting Indigenous rights and cracking down on political corruption.

In his first comments after the election win, Albanese said he wanted to bring Australians together.

“I want to unite the country. I think people have had enough of division, what they want is to come together as a nation and I intend to lead that,” he said referring to the divisive politics under conservative Prime Minister Scott Morrisson.

Earlier, Prime Minister Morrison conceded defeat as he congratulated Albanese on his victory.

In the 26 years since Albanese was first elected to parliament, Labor has only held government for five years – during the tumultuous terms of Kevin Rudd and Julia Gillard.

Albanese first became a minister after Rudd’s 2007 election victory and rose through the Labor ranks, finally taking over the opposition leadership after the party’s crushing loss in 2019.

Albanese, who has described himself as the only candidate with a “non-Anglo Celtic name” to run for prime minister in the 121 years that the office has existed, referred to his own humble upbringing in the Sydney suburb of Camperdown.

“My mother dreamt of a better life for me. And I hope that my journey in life inspires Australians to reach for the stars,” the 59-year-old said.

“I want Australia to continue to be a country that no matter where you live, who you worship, you would love, or what your last name is, that places no restrictions on your journey in life.”

As a young child, to spare Albanese the scandal of being “illegitimate” in a working-class Roman Catholic family in socially conservative 1960s Australia, he was told that his Italian father, Carlo Albanese, had died in a car accident shortly after marrying his Irish-Australian mother, Maryanne Ellery, in Europe.

His mother told him the truth when he was 14 years old: His father was not dead and his parents had never married.

She was living with her parents in their local government-owned house in inner-suburban Camperdown when her only child was born on March 2, 1963.

Out of loyalty to his mother and a fear of hurting her feelings, Albanese waited until after her death in 2002 before searching for his father.

Father and son were happily united in 2009 in the father’s hometown of Barletta in southern Italy. The son was in Italy for business meetings as Australia‘s minister for transport and infrastructure.

At 12, Albanese helped organise a rent strike that kept his mother’s public housing property from being sold off to developers. Those who know Albanese say he is genuinely motivated by the mix of pragmatism and concern for social justice he gained during his childhood struggles.

“As I grew up, I understood the impact that government had, can have, on making a difference to people’s lives,” Albanese said. “And in particular, to opportunity.”

Albanese was the first in his family to attend university, where he studied economics and became involved in student politics.

At 22, he was elected president of Young Labor, the party’s youth wing, and worked as a research officer under the economic reformist government of Bob Hawke, Labor’s longest-serving prime minister.

“Anthony has … a capacity to look beyond the party political alignment,” said Robert Tickner, a former Labor member who took the teenage Albanese’s call about his mother’s stove.

“(He) believes in this idea that there are people of good will in the community,” Tickner said in a phone interview to Reuters. “He’s not someone who’s a sectarian.”

Labor has promised more financial assistance and a robust social safety net as Australia grapples with the highest inflation since 2001 and soaring housing prices.

On foreign policy, the Labor will continue the country’s pro-US tilt, with Albanese saying the “first pillar” of Australia’s foreign policy is its alliance with the United States.

He supports a long-term alliance, AUKUS – agreed last year with the United Kingdom and the US to equip Australia’s navy with nuclear-powered submarines.

Albanese had criticised the previous government’s handling of relations with the Solomon Islands, which recently signed a defence agreement with China. He predicts that a more ambitious climate change policy will improve relations with Pacific island nations threatened by rising seas.

The Labor party under Albanese has proposed to establish a Pacific defence school to train neighbouring armies in response to China’s potential military presence on the Solomon Islands on Australia’s doorstep.

Asked to describe what he can bring to the job of prime minister, Albanese said: “Integrity and the capacity to take responsibility.”

The Labor leader has criticised the outgoing leader Morrison for not owning up to his mistakes.

“I don’t pretend to be perfect. What I do, though, is accept responsibility. And I step up and I won’t go missing,” Albanese said on the eve of the election. 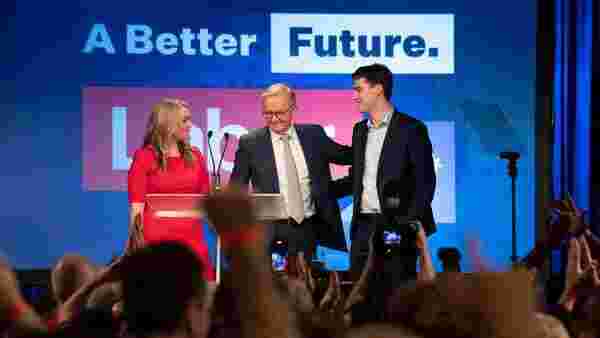 Livemint
From analysis to the latest developments in health, read the most diverse news in one place.
Anthony Albanese's rise from humble beginnings to the prime ministership