When the Russian invasion of Ukraine started on February 24, Australian embassy staffer Nadia Teriokhina had one thought on her mind: She didn't want to get trapped behind enemy lines.

She told Anthony Albanese she counted herself among the lucky ones.

Hundreds were massacred in Bucha, outside of Kyiv, and about 10 minutes from her home in Irpin, including women and children.

Some women were raped before they were killed.

"We didn't know what to do, how to behave or where to run," she said.

"I said to my husband, 'I just don't want to be in the occupied territory,' so we went to Kyiv."

Ukrainian tanks were headed in the opposite direction as they fled.

The executive assistant embraced her boss, Australian ambassador Bruce Edwards, when they reunited outside what was left of her apartment block.

Both are waiting for the Australian embassy to reopen so they can start work in the city again.

Ms Teriokhina's own flat was undamaged, but the building was condemned as unsafe.

"I had somewhere to stay in Kyiv right now. But some of my neighbours, especially the elderly people, have nowhere to go," Ms Teriokhina said.

The Prime Minister entered the country from Poland under a veil of secrecy, travelling on an armoured diplomatic train used by a string of world leaders in recent months.

He travelled with a party of seven, including his social media photographer, foreign affairs adviser, national security adviser, a senior member of his department and one of his personal political staffers.

He also brought in just three members of the media, including this reporter, a photographer, and a television cameraman, whose names were drawn from a hat.

Other members of the parliamentary press gallery who travelled with him to Madrid and Paris over the past week were barred from the trip on security grounds.

At least a dozen Australian special forces soldiers dressed in sports coats, chinos and dark sunglasses were on the ground to ensure the Prime Minister's safety.

They were discretely armed, but the travelling party was assured there was "no way in hell" that any harm would be allowed to befall them.

Their vehicles carried additional weapons, body armour for the Prime Minister and other members of his team, and mobile medical facilities in case of emergency.

Mr Albanese travelled first by motorcade to Bucha, to pay his respects at the mass grave where 416 civilians were buried by Russian forces after they were killed.

"Every one of them shot. This was not collateral damage, this was intentional.

"One of the slaughterhouses was a summer camp. There were four volunteers there. They were all shot."

Mr Albanese told him: "Australia shares your desire to seek justice for these war crimes, and we will continue to do so."

The grave, behind the town's Church of St Andrews, has become a pilgrimage site for visiting dignitaries.

In a chapel underneath the church, Mr Albanese joined the congregation, lighting a candle for the victims of the massacre.

Mr Albanese travelled in an armoured Land Cruiser in a motorcade of about 10 vehicles.

Local traffic was blocked wherever they went, with soldiers and police stationed along the route.

Central Kyiv appeared largely undamaged to the visitors, but concrete blocks and sandbags protect major buildings, and large welded steel road spikes sit at the sides of key routes into the city, ready to be deployed if the invaders try to attack the city again.

Shops and hotels are open once again and daily life has returned to the city.

There was even a smaller group of tourists milling around near the Intercontinental Hotel, which Mr Albanese's team used as a base during the visit.

But 30 minutes to the north of the city, the signs of the war are obvious — blown-out buildings, missile craters, broken windows, piled-up wrecks of burned-out cars and sandbagged foxholes under the cover of trees.

Ahead of his meeting with President Volodymyr Zelenskyy on Sunday afternoon, Mr Albanese also visited the destroyed Hostomel airport, the site of the failed Russian paratrooper assault in the initial days of the invasion, aimed at securing the facility to bring in troops and supplies by air for the battle of Kyiv.

He shook his head as he surveyed the wreckage of what was once the world's largest aircraft the Antonov Mriya, which translates to "The Dream".

He spoke to members of the national guard unit that repelled a determined attack by Russian forces to land helicopters at the airfield, which could have changed the course of the war.

As he left, they gave him a model of the famous Antonov plane to take home to Canberra.

Mr Albanese said as a former aviation minister, he was touched by the gesture, and the model would take "pride of place" in his prime ministerial office.

Ukraine's ambassador to Australia, Vasyl Myroschnychenko, travelled to Kyiv for the visit, which he agitated for behind the scenes after delivering an official invitation from Mr Zelenskyy.

But within weeks, plans were underway to make it happen.

An advance security team comprising 2nd Commando and Special Air Service Regiment personnel were deployed to the country to work with the Ukraine Defence Force and the Australian embassy — now based temporarily in Poland — to make the visit happen.

A member of the team said the capital was mostly safe.

The main risk was a potential missile strike. Russia has recently upped its use of rockets against targets across the country in retaliation for Ukraine's use of American-donated HIMARS missiles.

Ukraine's Deputy Foreign Affairs Minister, Mykola Tochytskyi, said things were "much more difficult in the east", where Ukrainian forces were being pounded relentlessly by Russian artillery.

"If you look at the quantity of her artillery, it is one to seven [to Russia]," he said.

"That's why we appreciate Australia's support, in Bushmaster [protected vehicles], and M777 artillery. They are very effective."

The trip was made under a strict media blackout imposed by the Prime Minister's office on the advice of the Australian Defence Force.

Mr Albanese's presence in the country was supposed to remain a secret until he was back in Poland.

The media's phones and other devices had to be surrendered in order to make the trip.

But his presence in the country was revealed on social media as he travelled around the Ukrainian capital and its surrounds.

Mr Albanese also met the Australian embassy's driver, Oleksander Lazarachuk, who fled the fighting in February with his elderly mother, taking her 400 kilometres to Lutsk, in the country's west.

"She didn't want to leave, but I just took her and off we went," he said.

Mr Lazarachuk had mixed feelings about meeting the Prime Minister who was driven by his special forces team.

"I should be driving you today," he said. "I am the embassy driver."

Ben Packham reported from Ukraine on behalf of the Australian travelling media. 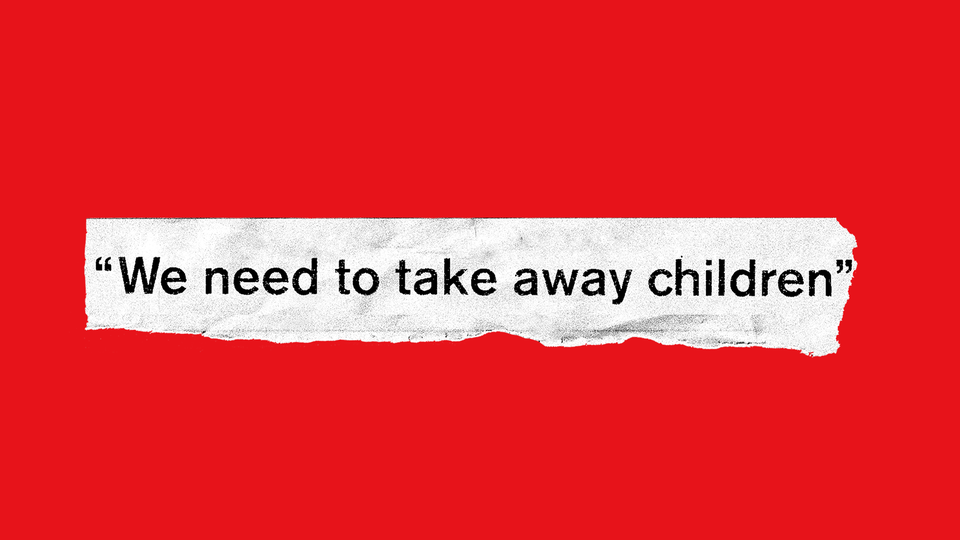 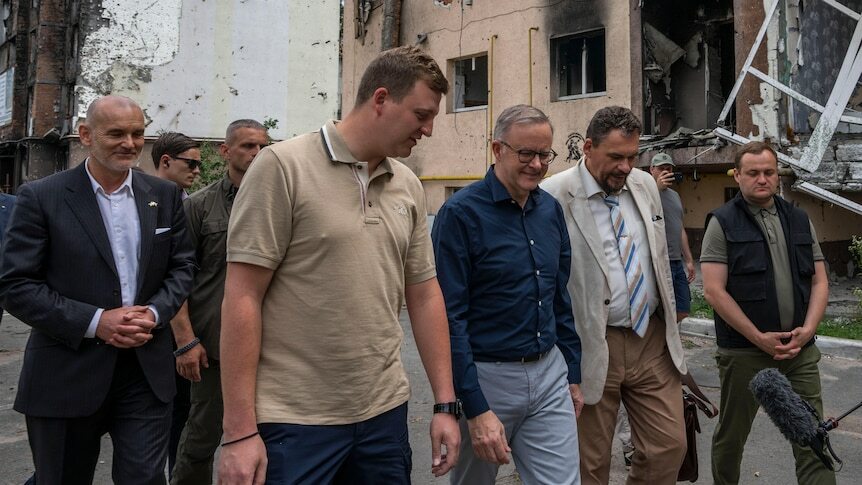 Prime Minister Anthony Albanese in Ukraine, visits war-affected towns of Bucha and Irpin
Anthony Albanese, who was invited to Ukraine by President Volodymyr Zelenskyy, surveys "devastating" destruction in Irpin, describing what he sees…

The Guardian - UK
Albanese announces $100 million in military aid for Ukraine, pledging support for 'as long as it takes'

Australia has given Ukraine another $A100 million in military aid, and Anthony Albanese has pledged Australia will continue support for…

The Conversation
The Loop: Cargo crew to remain stranded overnight, major flooding risk continues in NSW and behind the scenes of the PM's Ukraine trip