Anthony Albanese Has Been Sworn In As PM So Who Are The New Main Characters In Parliament?

Senator Penny Wong has been sworn as Minister for Foreign Affairs. #FunFact Her swearing in continues a trend of #Australia having only female Foreign Ministers since 2013. #ausvotes #auspol #AusPol2022 #AusVotes22 #AusVotes2022

The post Anthony Albanese Has Been Sworn In As PM So Who Are The New Main Characters In Parliament? appeared first on PEDESTRIAN.TV .

and familiar faces from the Coalition like  are gone, who will the new senior members of parliament be under Labor? Albanese is obviously top of the chart as PM. He was sworn in alongside his four most senior members of parliament who now have temporary control of every portfolio (ie defence, energy, transport etc) before Labor finalises its cabinet. Normally all ministers are sworn in at once but Albanese has to fly to Tokyo this morning. The process has been pushed forward so he can at least have a Deputy PM to be in charge while he’s overseas. Under Morrison our Deputy PM was , who remains leader of the Nationals. Our new Deputy PM is who is the representative for the regional seat of Corio in Victoria. He will also be the was sworn in next as leader of the Senate and the Minister for Foreign Affairs. She will also be Australia’s first foreign affairs minister who was not born in Australia but immigrated.  from Logan, Queensland is our new Federal Treasurer.  from the ACT was also sworn is as Minister for Finance, Minister for Women and Attorney-General. Neither Chalmers nor Gallagher held cabinet roles in the previous Labor government, so this is a big promotion for them. The rest of the cabinet will be sworn in in the coming days so stay tuned for the next announcements.
Sign up to read this article 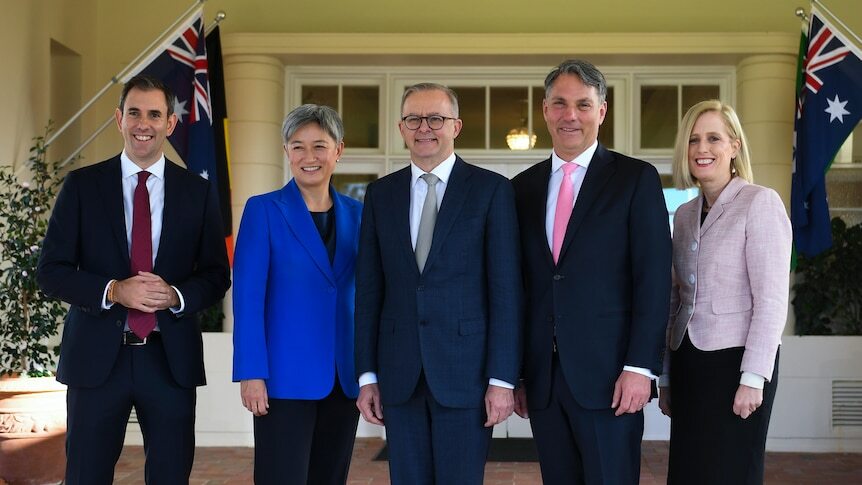 Who are the other four Labor ministers sworn in on Monday?
Anthony Albanese wasn't the only Labor member to be sworn into office on Monday — four of his senior colleagues…

Australia's Labor Party ousted the conservative coalition at an election on Saturday, returning the centre-left party to government after nine…