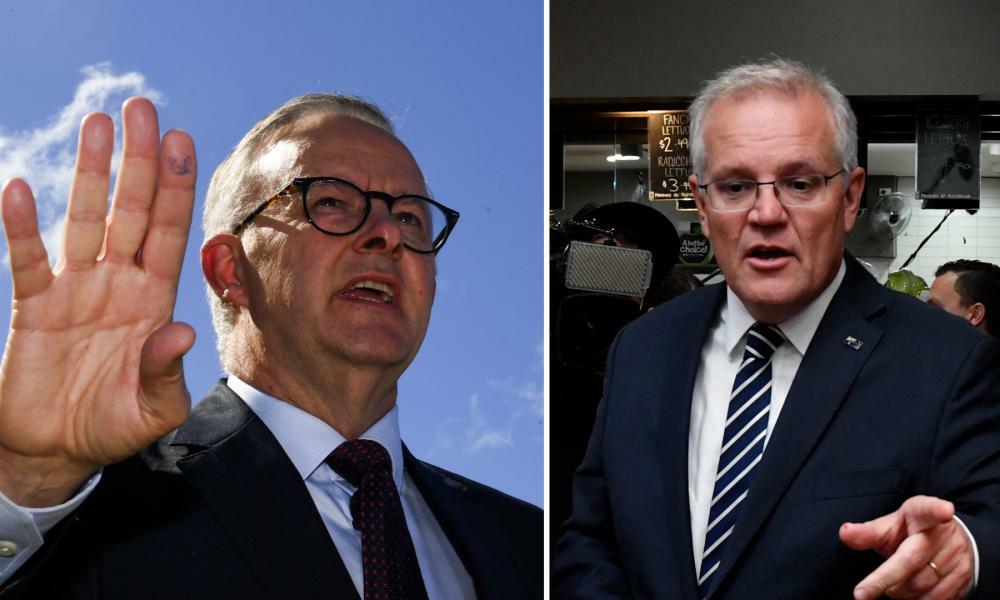 Australia election: climate and cost of living in focus as leaders stumble
Labor hope to end a decade in opposition by ousting Scott Morrison’s government on 21 May, but independents have grabbed…

The Guardian - AU
Australia 'always there' for Solomons: PM

AAP
Albo fumbles another gotcha before a day of fiery debates — but does anyone care?

Albanese faced another gotcha question, and stumbled. But the real fireworks came during two high-profile debates.

Crikey
One subscription that gives you access to news from hundreds of sites
Government’s legacy ‘a toxic miasma of division’, Ryan says – as it happened

The Guardian - AU
Half-time results are in: who's having a good election campaign, and who isn't?

When pre-poll voting starts on Monday May 9, it will signal the denouement of one of the least compelling streaming…

Anthony Albanese: five key questions for the Labor leader ahead of the 2022 election

Anthony Albanese hopes to be the prime minister of Australia in two weeks time. Here are five things to know before voters go to the polls in the federal election on 21 May.

What are his first priorities?

Albanese says people have criticised him for a lack of ambition in the Labor program, but when he took the party leadership he wanted a set of measures that could be plausibly implemented in one term. He said he’s always had two dates in his head – 2022 and 2025. “In the first term of a Labor government, if we’ve done childcare reform and made it cheaper, if we’ve fixed the NBN, if we are reorienting infrastructure investments toward productivity, if we are making a difference in terms of security at work, if we are establishing a change to close the gender pay gap, if we’ve advancing the constitutionally enshrined voice to parliament, if we’ve [moved on] climate, establishing the policy for 43% by 2030, and updating transmission into the 21st century, allowing renewables to fit into the grid, creating more energy security, lowering energy prices … that’s an ambitious, big agenda for a new Labor government.” He says if all that can be implemented in three years, that will be a firm foundation for Labor to seek a second term, and the longer the government lasts, the harder it becomes to repeal or erase various reforms.

People are going to want Labor to fix everything – how will he keep expectations realistic?

Start with telling the truth, Albanese says. “You deal with that by being honest and straight about it. We haven’t said we will do anything we can’t do. We will always want to do more on health and education but we also have to be economically responsible. We have been very disciplined [fiscally]. We’ve assessed spending against what it delivers for productivity.”

Will Labor increase the ambition of its climate policy to secure confidence and supply agreements with teal independents?

The short answer is no. “We are at 43%. Our policy that we are going to the election on is very clear and it’s ambitious, it’s achievable, it’s costed, it’s detailed, and it will make an enormous difference.” What if that’s not enough? “Our policies are clear, and coherent and achievable and they’ll end the climate wars, they are supported by the business community, the National Farmers’ [Federation] and the unions … they can support that, or not. That’s a decision for them. We didn’t come up with a number and work out how to get there. We are the only party that has a plan to get to net zero.”

Will there be any detailed minority government agreements? “No,” Albanese says. “What I will do regardless of circumstances is always treat people with respect.” He said the crossbenchers supported Julia Gillard and not Tony Abbott in 2010 because Labor had been courteous and inclusive in the previous parliament. “We engage with people. Morrison has contempt for other views. Part of his objections to a voice to parliament is the only voice he wants to hear is his own. He doesn’t allow private members bills to come forward, he doesn’t treat the parliament with any respect at all. He actually ridicules the concept of parliament. He sees my knowledge of the parliament as a subject of abuse. But that’s how laws are made in this country.”

What’s the outlook for China and the Pacific?

Albanese says the Australia-China relationship “will continue to be difficult”. Is there any opportunity for a reset? “I support the Biden administration’s perspective which is competition without catastrophe. We need more considered responses to China’s more aggressive positioning in the region than just ramping up rhetoric. We need to consider the failure of our foreign policy – the Solomons [security pact with China] was a serious failure. We have been the security partner of choice in the Pacific. We need to not compromise on our values at all. We need to build with our allies … in a coherent way to get a stronger presence in the region. Not just in the Pacific, but the Indian Ocean and countries to our north.”

He says Australia needs more enhanced defence capability. “National security is about defence hardware but it’s also about our diplomatic capability in the foreign service, it’s about aid and outreach, and our actions in international forums and working with our neighbours.” He says opportunity lies in Australia jointly hosting a conference of the parties climate conference with the Pacific.

He adds it will be important to mend fences with the French president Emmanuel Macron. “What’s important about the French is this isn’t just their position in Europe, they are our near neighbours [in the Pacific]. The breakdown in relationships is more than just France. The decision to leak a text message from the leader of France to the leader of Australia, with spin that distorted that exchange is reprehensible. It’s done extraordinary damage and other leaders will be conscious that happened. I can’t recall a similar event happening between two friendly nations that have been allies and fought in two world wars next to each other.”

If he wins, he’s got a lot to do – would he prefer Josh Frydenberg or Peter Dutton as his opponent?

Albanese says the question of who would lead the Coalition after potential loss is ultimately up to the Liberal party. He says it’s pointless to speculate because at this point, we aren’t sure whether or not Josh Frydenberg will see off what looks to be a serious challenge from a teal independent, or if Peter Dutton holds his Queensland seat. But if Albanese wins, he wants a partner to recognise Indigenous Australians in the constitution. Albanese notes Scott Morrison has “walked away” from the recognition agenda. “On issues like constitutional recognition, we will have a very clear and explicit mandate to take it forward. This is unfinished business for the country. It should not be partisan. It needs to get done. It diminishes us as a nation to pretend that our history began in 1788. It neither began then, nor ended then.” Albanese says the voice to parliament is a “generous offer” from Indigenous people and it needs to be met by the major parties in the same generosity of spirit, and soon.

Australia election: climate and cost of living in focus as leaders stumble
Labor hope to end a decade in opposition by ousting Scott Morrison’s government on 21 May, but independents have grabbed…

The Guardian - AU
Australia 'always there' for Solomons: PM

AAP
Albo fumbles another gotcha before a day of fiery debates — but does anyone care?

Albanese faced another gotcha question, and stumbled. But the real fireworks came during two high-profile debates.

Crikey
One subscription that gives you access to news from hundreds of sites
Government’s legacy ‘a toxic miasma of division’, Ryan says – as it happened

The Guardian - AU
Half-time results are in: who's having a good election campaign, and who isn't?

When pre-poll voting starts on Monday May 9, it will signal the denouement of one of the least compelling streaming…