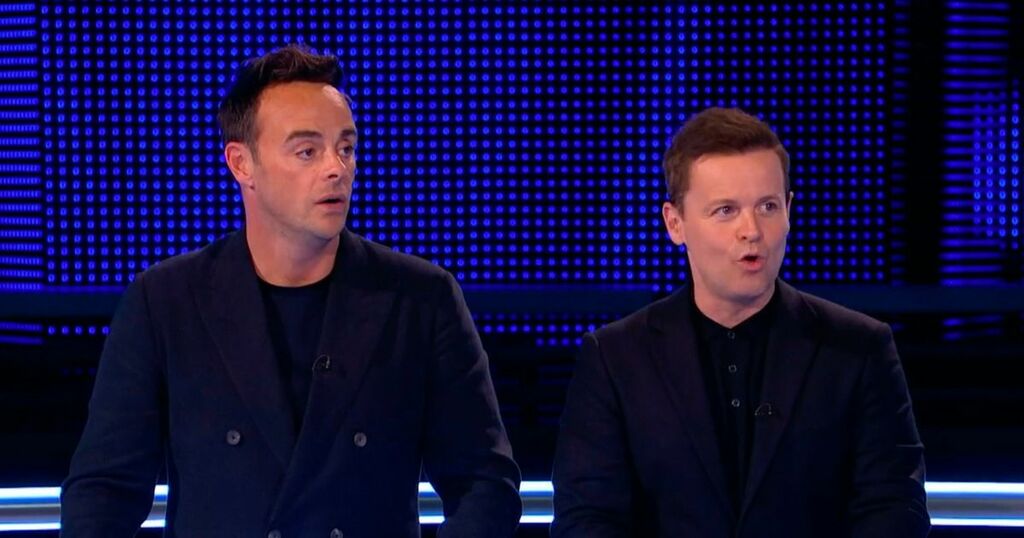 Not only does the quiz show feature the world's first limitless jackpot with an endless money ladder, but it also marks the hosts' first new show in more than 10 years.

They've been side by side on television for more than 30 years, after they both started out in teen drama Byker Grove in 1990.

The pair are also inseparable away from filming sets, and were neighbors up until 2018 when Ant split from his ex-wife Lisa Armstrong and left their home, OK! reports.

Amid coronavirus regulations in 2020, their households also became one cohort during the filming of Britain's Got Talent.

The Geordie pair are both married to women within the industry, but away from the cameras.

Declan Donnelly, 46, married Ali Astall, 43, in 2015, who is a talent manager and worked as Dec's manager for over a decade before they got together.

Ali, who is Australian, works with a number of famous faces, from Fearne Cotton to Holly Willoughby, The Sun reports, however she prefers to remain away from the limelight.

The couple have one child together, Isla Elizabeth Anne Donnelly, who is now three-years-old.

After splitting from his first wife, Ant McPartlin, 46, tied the knot with his former personal assistant Anne-Marie Corbett, 43, last summer.

She worked for a London-based management company and was there to support Ant throughout his battle with drink and drug problems, which saw him in rehab, the Mirror reports.

His struggles came to a climax when he crashed his Mini while driving double the legal limit in 2018, which saw a four-year-old girl taken to hospital following the crash.

Ant was slapped with a 20-month driving ban by magistrates, along with an £86,000 fine.

“And take them with alcohol, which is ridiculous. The doctors told me, ‘You could have killed yourself’.”

He later described the incident as 'an explosion of the worst possible moment in my life.,' saying he felt 'shame, guilt, remorse, and embarrassment'.

In an interview with The Sun a year later, Ant cited his new wife Anne-Marie, who has two daughters, Poppy and Daisy, with her ex-husband Scott Corbett, as the main reason he managed to change.

He said: "Anne-Marie honestly is the fundamental reason for the great change in my life.

Despite their unbreakable bond, the dark period was also a testing time for Ant & Dec's relationship and threw uncertainty over future joint presenting gigs.

Reflecting upon the ordeal, Dec said in their 2019 documentary that he was 'incredibly angry' that Ant didn't come to him for help at the start.

"It's been a tough couple of years, it's really tested the bond we've shared since we were 13 years old," he said.

"I was incredibly angry at the start, so angry and disappointed in him that he didn't ever come to me and say I'm struggling, I need you because I thought if the shoe was on the other foot I would have gone to him said I'm in trouble and he never came to me and that hurt me a lot."

Dec has also spoken out about a double tragedy in his life, back in 2011.

The star's dad, Alphonsus, died at the age of 78 after losing his battle with lung cancer.

And just 10 days before, Dec's uncle and Alphonsus' brother, Anthony, died where he lived in Northern Ireland, where Mr Donnelly was born before moving to Newcastle in the '50s.

Speaking to the Mirror, Dec said: “My dad had lung cancer and was treated at the Royal Victoria Infirmary in Newcastle.

“I was with him at the end, with the family. I just want to be with them so we can all be together and to support them through this. It’s been a tough summer.”