Anna Simpson and her world of fishing: The Cicero woman keeps going fishing all over the place 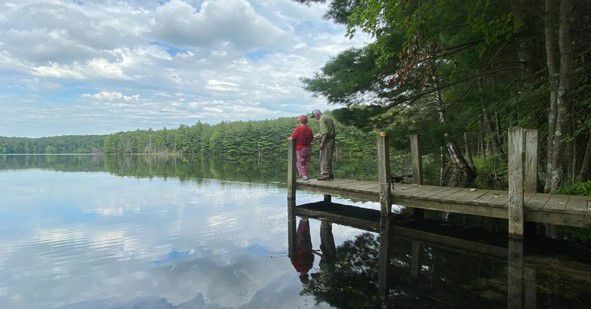 “I always said I didn’t catch a fish big enough to satisfy me,” Anna Simpson said.

Talking to her earlier this week, I understood why fishing meant so much to her life and why several readers suggested I do a column on her.

She did find some satisfaction with a 35-inch, 16-pound lake trout, caught on Nov. 27 from southern Lake Michigan. It earned her Fish of the Week honors.

Anna, who turns 79 this month, also has caught a 35-inch, 35-pound carp from Lake Michigan and a big payara from Columbia.

“I am happy that I caught the fish that satisfied me,” she said.

“Now she is spoiled, and it hard satisfying her,” cracked son Mark, who normally catches the big ones on family outings.

For the Cicero family, fishing is family. Mark noted he has fished with his parents, Anna and Tommy, “since he was old enough to play in the minnow bucket.”

At first it was in Tommy’s 16-foot aluminum boat. Now roles are reversed and it is Mark taking his parents out.

Anna grew in Pilsen (Little Village) at 26th and Trumbull when it was a Czech and Polish neighborhood. She and Tommy met at Farragut High School and they have celebrated their 55th wedding anniversary.

In a foretelling event, one of their first dates was netting smelt on the Chicago lakefront.

As Mark tells it, “They got home late and my dad put the smelt in the bathroom sink. The next morning when my dad’s mom and sister got up to get ready to go to church they starting screaming `Tommy, what are all these dern fish doing in my sink?’ as they came across the sink full of fish.”

“We had a long romantic courtship, then he was drafted into the service and I married him halfway through the service,” Anna said.

Tommy was a military policeman stationed at Fort Carson. He did not get shipped to Vietnam, for which Anna said, “I thank the Lord he didn’t have to go.”

Her interest in fishing picked up some at Fort Carson and, as family life progressed, so did her fishing.

When Mark was in high school, Tommy started taking him on a Canadian fishing trips, something Mark was especially appreciative of as he was taken out of a school for a week. Eventually Anna often joined the boys on those trips.

She drove a bus for senior citizens in Cicero for 15 years.

When both Tommy and Anna retired, they joined Riverside Fishing Club. Since then Anna has gone along on club outings and trips.

She’s been fishing at the scenic Owasippe Scout Reservation in Michigan.

Anna and Tommy have also enjoyed Mark taking them on some of his international trips. They have been fishing in places as distant as Columbia, where Anna fished for peacock bass and caught payara. She’s camped along the Amazon River.

Oh, of course, there is a true angler’s tale of the one that got away.

“We went to Florida and I caught a good tiger shark, it was a big as the back of the boat,” Anna said. “But it got away.”

Mark said when the shark was at the back of the boat, the line broke just past the steel leader.

Considering her joy in fishing, I asked Anna how long she would keep fishing and she said, “I will go along as long as [Mark] can take me.”