Animal rescuers are working around the clock to rescue and care for pets and livestock caught in floodwaters in western Sydney.

Using a boat to access the parts of the Hawkesbury region under water, Crisis Animal Response and Evacuation NSW (CARE NSW) has rescued kangaroos, dogs, horses, and delivered food and supplies to stranded cows.

"They're freezing, hypothermic, and probably a little bit in shock too," said animal rescuer Josh Robinson.

While the group has been able to rescue dozens of animals, many have not been so lucky.

Mr Robinson described confronting scenes, including discovering dead animals that had been left behind at one property.

"They've got goats, they've got lambs in there, they've got poultry like chickens and peacocks, turkeys, which are all just floating around unfortunately," he said.

"Unfortunately I've already seen a lot of dead animals and I'm sure there's a lot that I haven't seen yet."

The Bureau of Meteorology said the Hawkesbury River peaked at 13.93 metres on Tuesday at Windsor, surpassing the March 2022 flood emergency when water levels reached 13.8m.

Mr Robinson said many of the animal owners requesting help from the service had not believed the warnings about the flood risk.

"Next minute they're underwater asking for help," he said.

The Hawkesbury Companion Animal Shelter in Windsor did heed the warnings and safely evacuated dogs and cats on Sunday afternoon.

"The community response was absolutely awesome. Unfortunately, some of the responders, by the time we had to evacuate, were cut off themselves so we couldn't take the cats to them," she said.

"But fortunately one of our local vets opened up on Sunday afternoon and put all the ones we couldn't accommodate into boarding."

Ms Robbie has long opened her Windsor home to kittens and cats from the shelter and is now looking after three extra cats who appeared unfazed by the drama.

Dozens of dogs were also evacuated and are now being housed at several facilities including the Richmond Race Club and Blacktown Animal Holding Facility.

It is the second time the animals have had to be evacuated this year due to floods and Ms Robbie said the emergency response had improved since the April floods.

With many roads inundated it was still unclear how much damage the shelter suffered and when the cats and dogs would be able to safely return to the shelter.

Ms Robbie said it could take some time to clean up if the shelter had been breached by flood waters as it is next to a waste water treatment plant.

"We don't want the cats and dogs to go back into a toxic environment," she said.

The wet weather is expected to ease in Sydney as the heavy rain moves north, but the State Emergency Service (SES) warned the Hawkesbury River could continue to rise at Windsor, North Richmond, and Sackville.

At the edge of the water covering the Hawkesbury River Bridge at Windsor, many locals agreed this flood was worse than earlier emergencies.

Cathy Garner, who has lived in Windsor her whole life, said she felt sorry for the thousands of people affected by flooding again.

"It's very tough. I mean four times in, what, four years? It's a little bit more than you can bear," Ms Garner said.

Karyn Notary brought her two children to the edge of the flood waters to "help them understand the enormity of the situation".

"We need to teach them about mother nature. They need to understand they're at the mercy of mother nature, we all are," she said.

Windsor local Paul Caleo said he sees the trauma and the disruption for businesses and people's lives when he sees the floodwaters.

"The first one people say 'oh well, we'll just clean it up and get back in'," he said.

"But I'm very well aware that there is a lot of people that are quite exhausted this time." 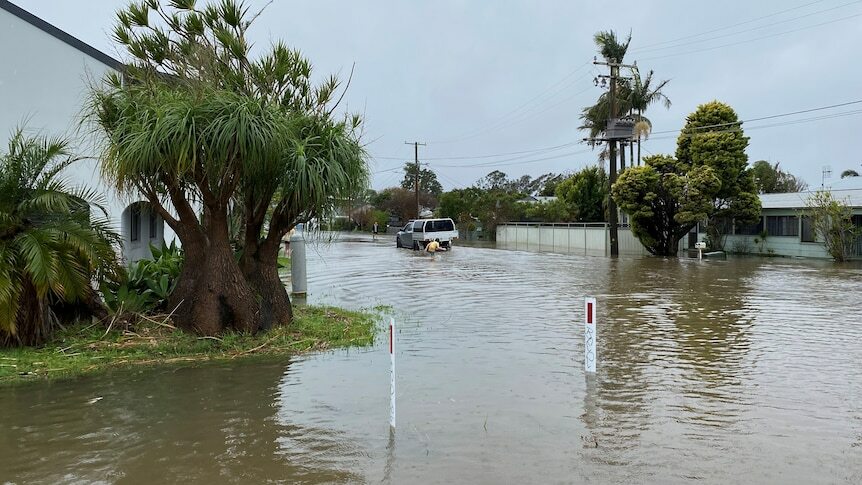 NSW floods updates: High tide pushes up water levels on NSW Central Coast after downpour — as it happened
Residents on the NSW Central Coast say the flooding they experienced on Wednesday was the worst they have ever seen…

ABC News
NSW floods: Evacuation orders remain in place for parts of the state while others begin the clean-up — as it happened

Judy White has been in her home at Londonderry, in Sydney's north west, for 12 months. It's flooded three times…