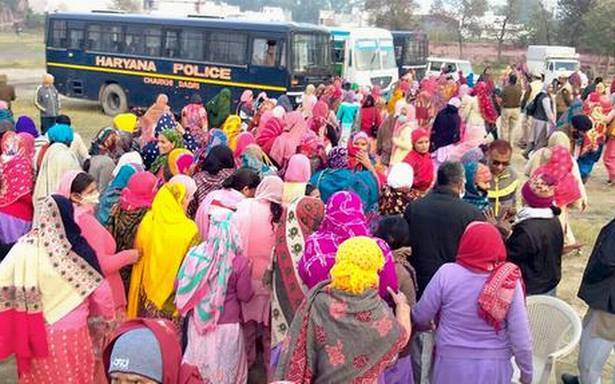 Several thousand Anganwadi workers and helpers courted arrest across Haryana in support of their demands, including implementation of increase in the honorarium promised by the Central government and retirement benefits, on Wednesday. The activists of various organisations of State government employees, farmers and women also courted arrested in support at several places.

Around 52,000 Anganwadi workers and helpers across the State are on strike since December 8 seeking implementation of ₹1,500 and ₹750 hike in honorarium announced by Prime Minister Narendra Modi in 2018. They are also demanding grant of skilled and unskilled workers status along with Dearness Allowance arrears as announced in 2018 and ₹1 lakh and ₹50,000 retirement benefits to the workers and the helpers respectively, among other demands.

The agitation is supported by the Centre of Indian Trade Unions, All India Democratic Women’s Association, Sarv Karamchari Sangh, Haryana Karamchari Sangh and Kisan Sabha, among others.

AIDWA vice-president Jagmati Sangwan said the government should immediately agree to the demands since these were justified and more than 50,000 women were impacted. “Instead of looking into the justified demands of the agitating women workers, the government is playing politics by trying to create differences between different unions. But their tactics have failed miserably during the farmers agitation and will fail again,” she said.

CITU vice-president Satvir Singh, leading the protests in Rohtak, said around 1,000 women workers gathered for a public meeting at Mansarovar Park in the morning before marching towards the Deputy Commissioner’s office and eventually courted arrest at Netaji Subhash Chander Chowk in the afternoon.

“The agitating women and men were taken to different police stations in ten buses and let off a few hours later. There were reports of similar arrests in almost all districts, including Kaithal and Karnal,” said Mr. Singh.

Shakuntala, general-secretary, Anganwadi Workers and Helpers Union, said the strike would continue till January 15 and a decision on future course of action would be taken at a meeting of the co-ordination committee of various unions.

“We would not hesitate to hold sit-in demonstrations outside the residences of BJP MLAs and Ministers, if our demands are not met,” said Ms. Shakuntala.