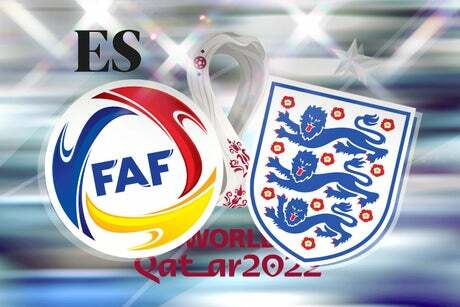 England know victory over minnows Andorra tonight will leave them on the brink of securing qualification for the 2022 World Cup in Qatar.

Gareth Southgate’s side have won five of their opening six games, drawing the other against Poland, and will be expected to make light work of tonight’s task against a side they beat 4-0 at Wembley last month.

However, Andorra ran Hungary close last time out in qualifying and will hope to cause an almighty shock.

The game will be officiated by an all female team while concerns have been raised about the plastic pitch upon which the match will be played.

Wales’ Gareth Bale described as the “worst” pitch he had played on and it could play a role in Southgate’s selection.

The match will take place at the Estadi Nacional in Andorra la Vella.

Where to watch Andorra vs England

TV channel: Tonight’s game will be shown live on ITV, with coverage beginning at 7pm.

Live stream: Viewers can watch the game via the ITV Hub website and app.

You can also follow all the action with Standard Sport’s LIVE match blog.

England are expected to use this fixture to experiment. Captain Harry Kane may not be risked due to concerns over his ankles on the artificial surface, while Aaron Ramsdale could make his debut in goal.

Kalvin Phillips’ withdrawal from the squad could force Southgate to pick Declan Rice in an otherwise mostly changed side.

Albert Alavedra, Marcio Vieira and Moises San Nicolas will all miss out.

Gareth Southgate’s side emerged 4-0 victors when these two met at Wembley in September. Andorra are still seeking a first win or draw against England.