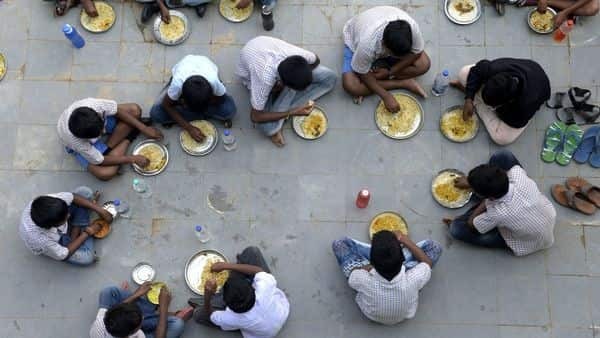 Soon after students started complaining of vomiting and uneasiness, they were taken to a hospital nearby.

"Around 70 students were shifted to hospitals after they reported vomiting on Monday late night. The health of all the students is stable now. Doctors have examined the students and have taken their samples to figure out why they fell ill. I will give the report only after doctor's confirmation," said L Chandrakala, district education officer.

"According to the information I have received, they started vomiting after dinner on Monday. We suspect its food poisoning," added Chandrakala.

This comes even as the state is dealing with torrential rains and floods in several parts.

The toll in the rain and flood-related incidents in Andhra Pradesh touched 34 while 10 more people still remained untraced, the state government said on Monday.

One railway line in the Vijayawada-Chennai section was re-opened for traffic on Monday after repairs were completed to the damaged section near Padugupadu in the SPS Nellore district.

The Chennai-Kolkata National Highway-16, which remained cut off in SPS Nellore district since late Saturday night, was also partially restored for vehicular traffic.

Over 50,000 persons have been lodged in relief camps in these four districts.

Making a statement in the Legislative Assembly on the flood havoc in Chittoor, Anantapuramu, Kadapa and SPS Nellore districts, Agriculture Minister K Kanna Babu said the 34 deceased included three members of rescue teams. Each family of the deceased would be paid an ex gratia of ₹five lakh.

Earlier, Chief Minister YS Jagan Mohan Reddy conducted a videoconference with Collectors of the flood-affected districts and enquired about the relief operations.