Analysis-Bolsonaro rallies base but turns off allies and markets 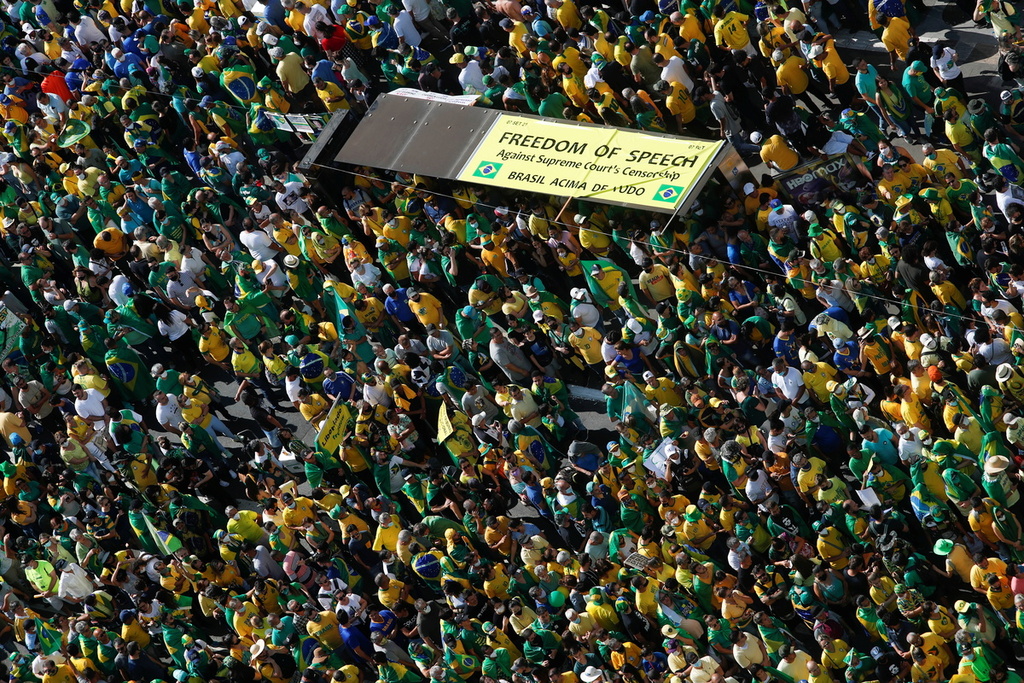 Far-right President Jair Bolsonaro filled wide avenues in Brazil's biggest cities with his supporters on Tuesday, but the depth of their fervor did little to help his narrowing appeal.

While his attacks on the Supreme Court and election integrity may keep his core base activated - roughly one in four Brazilians - they could hurt his attempts to advance his agenda in Congress or build another winning coalition in next year's election.

"The establishment is convinced now that pacifying Brazil is not possible with Bolsonaro at the helm. This is leading to his political isolation," said political analyst Leonardo Barreto of Vector Consultancy in Brasilia.

"The political and economic classes feel he can no longer be trusted... and economic reforms are not possible anymore with Bolsonaro and the chronic instability he has brought," he said.

Brazilian financial markets reeled on re-opening after the Tuesday national holiday. The currency weakened more than 2% against the dollar, as the benchmark Bovespa stock index fell nearly 3%, with traders citing concerns about Bolsonaro's hardening rhetoric.

That could undermine delicate negotiations with the top court over the government's payment of legally mandated debts, which threaten to blow a hole in next year's budget.

The president's approval ratings have already tumbled on the growing impression that he is more concerned with institutional battles than taming inflation or addressing the world's second-deadliest coronavirus outbreak.

Opinion polls show him losing the 2022 campaign to former President Luiz Inacio Lula da Silva if a vote were held today. Bolsonaro supporters at rallies on Tuesday said that he could only lose the election if there was fraud.

Several associations of industry, finance and even agribusiness leaders have called in recent weeks for the president to respect the constitution and reduce tensions with Congress and the courts.

There are signs Bolsonaro's vocal disregard for constitutional checks and balances may also be forcing moderates in Brasilia off the fence and squarely into the opposition.

Vice President Hamilton Mourao said the government had enough votes in Congress to block any attempt to impeach Bolsonaro.

"I don't see there being a climate for the president's impeachment, either in the population or within Congress itself," Mourao told reporters on Wednesday.

Arthur Lira, speaker of the lower house of Congress, has been reluctant to open proceedings on the more than 100 impeachment requests, calling it a source of unneeded instability.

However, even Lira, a Bolsonaro ally, has appeared fed up with the president's ongoing attacks against Brazil's electronic voting system, saying on Wednesday he would not allow further discussion of a paper-based voting proposal rejected by Congress last month.

"It's time to say enough of this infinite negative looping," Lira said in his first public remarks after Tuesday's demonstrations.

Bolsonaro's office did not immediately respond to a request for comment on the diminished prospects for legislation change.

Former Health Minister Luiz Henrique Mandetta, who was fired last year over disagreements with the president over handling the pandemic, said Bolsonaro successfully mobilized his base on Tuesday: mainly older white voters. But he lacked the poorer masses and moderate Brazilians that he needs for re-election.

"The moderate Brazilian, the centrist, has left Bolsonaro and won't come back. They have no reason to do so," he said.

Mandetta said removing Bolsonaro by impeachment is not possible, and the president does not have power to stage a coup.

"We will have to tolerate this until the election. And it will be a sordid, tough election," Mandetta said.