Analysis | After Shiv Sena’s alliance with Congress and NCP, an ambivalent attitude to Hindutva and RSS 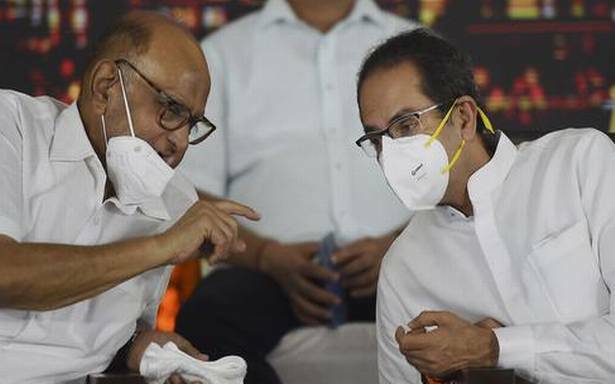 Ever since its shotgun marriage with the ideologically-opposed Congress and the Nationalist Congress Party to deprive the Bharatiya Janata Party (BJP) of power in Maharashtra, the Shiv Sena’s relationship with Hindutva and the Rashtriya Swayamsevak Sangh (RSS) has been ambivalent at best.

Earlier this week, the Sena rushed to the defence of the RSS in an editorial in the party’s mouthpiece Saamna, admonishing noted poet-lyricist Javed Akhtar for his comparison of the Sangh with the Taliban.

Yet only last Sunday, Sena MP Sanjay Raut, who is Saamna’s executive editor, had through his column in the paper lashed out at the RSS and the BJP-led government at the Centre for attempting to erase the contributions of India’s first Prime Minister Jawaharlal Nehru.

Mr. Raut severely rebuked the Modi government for removing Nehru’s picture from a commemorative poster released by the Indian Council of Historical Research (ICHR) marking the 75th anniversary of the country’s Independence.

According to analysts and election-watchers, the Sena’s blowing hot and cold over Hindutva and the RSS is symptomatic of a larger problem facing the Uddhav Thackeray-led party since its anomalous alliance with the NCP and the Congress to form the ‘Maha Vikas Aghadi’ (MVA) government in Maharashtra, which resulted in Mr. Uddhav Thackeray bagging the Chief Ministerial post.

“At this point, the Sena can neither afford to jettison Hindutva, nor can it confidently don its role as a militant defender of the ideology as it did during [Sena founder] Bal Thackeray’s time when it was the BJP’s bigger ally. This fundamental confusion has seeped down the party rank and file,” says Rajendra Pandharpure, a senior Pune-based analyst.

The Sena’s inchoate attitude towards Hindutva post the MVA’s formation has led the BJP and Raj Thackeray’s Maharashtra Navnirman Sena (MNS) to aggressively capitalise on the vacuum left by the Sena.

After spiritedly campaigning against the BJP in the Lok Sabha election in 2019, the MNS changed its ideological direction and inched closer to the BJP. This was symbolised by the Raj Thackeray-led party’s adoption of a saffron flag incorporating Chhatrapati Shivaji’s royal seal or ‘Rajmudra’.

More importantly, the Sena is in danger of alienating its Marathi vote bank in Mumbai by its ceaseless refrain through its editorials that the RSS had never contributed anything to the Independence struggle – essentially a Congress leitmotif against the Sangh.

“While Mumbai’s Gujarati vote bank has been the traditional constituency of the BJP in the city, the Sena has always drawn its sustenance from its Marathi voters. During Bal Thackeray’s time, when the Sena and the BJP were in alliance, Mumbai’s Marathi electorate which traditionally veered to the BJP nonetheless voted for the Sena during elections owing to Bal Thackeray’s militant Hindutva and the two saffron parties being together. However, the Sena’s enforced ambivalence towards Hindutva and by extension, towards the RSS, has left this Marathi constituency shaking their heads in disapproval,” opines another Mumbai-based analyst.

This could have ramifications in the eagerly anticipated Mumbai Municipal Corporation (BMC) election slated for February 2022.

The poll is particularly vital for the Sena, for whom the BMC is the party’s nerve centre as well as for the BJP, which is threatening to supplant Uddhav Thackeray’s party after its spirited performance in 2017, where it secured 82 seats to the Sena’s 97 of a total 227 seats. At the time, both parties were in alliance in the State government, and accordingly jointly formed the civic body government in the BMC.

However, this scenario has changed with the Sena’s bitter estrangement from the BJP after the 2019 Maharashtra Assembly poll.

“As voter memories go, it is Narendra Modi’s ‘present’ and not Bal Thackeray’s ‘past’ that he or she will bear in mind while casting their respective votes. In this, the Sena’s uncertainty of how to articulate Hindutva after casting its lot with the Congress and the BJP has been a major liability,” says the analyst.

Mr. Pandharpure also points out that Uttar Pradesh Chief Minister Yogi Adityanath’s visits to Mumbai have also bolstered BJP’s image as the party which is legitimately donning the Hindutva mantle.

While Prime Minister Modi wished Mr. Purandare in a 10-minute video address and BJP leader Ashish Shelar was present at Raj’s function, Mr. Uddhav Thackeray’s absence (understandably owing to his estrangement with both Mr. Raj Thackeray and the BJP) in the ceremony was conspicuous.

“Such instances merely highlight the Sena’s quandary over articulating Hindutva. Yet, in the future, one can expect more restraint while criticising the RSS in the Saamna as the party realises it may not be wise to go all out in its attack on the purest proponent of Hindutva,” says Mr. Pandharpure.