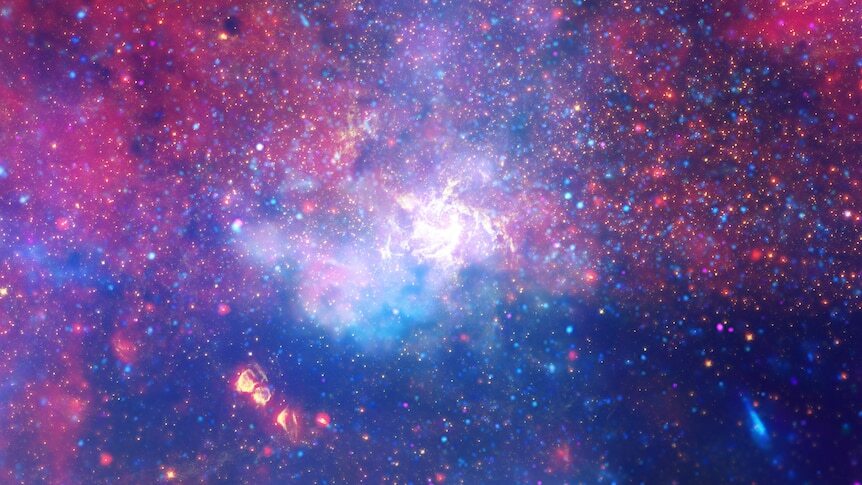 What do we know about Sagittarius A*, the monster black hole in the heart of our galaxy?
There's big news on the "event" horizon: For the first time tonight, we'll get a good look at the supermassive…

Just as the Earth's magnetic field inverts every few million years, black holes may do the same

Salon
We've seen the black hole called Sagittarius A* at the middle of the Milky Way. Now what?

There's a monster twirling around in the centre of our galaxy, and its portrait has finally been unveiled. So what…

A new analysis of the early universe shows quasars with growth capped by surrounding matter.

Livemint
Get all your news in one place
Latest Science news:

NASA and Boeing's Starliner plan to break a major space travel obstacle
In today's edition of Inverse Daily read about the Mars InSight lander, a Boeing Starliner launch, and a worrying pollution…

Inverse
Read news from The Economist, FT, Bloomberg and more, with one subscription
Learn More
What the UFO Discussion Really Needs

The Atlantic
Summer 'revenge travel' could raise drowning risk at beaches, but new tech might help

The Conversation
From analysis to good news, read the world’s best news in one place
Banana paper could save East Africa's potatoes from devastating worms

Potatoes originated in South America, where they were domesticated about 8,000 years ago. The plants were eventually brought to Europe…

A galaxy 65 million light years away holds secrets to an ancient traffic jam, which may have kicked out dark…

Astronomers using the Max Planck Institute’s eROSITA space telescope caught a brief, fiery deep space explosion, confirming the theoretical existence of a long-theorized “fireball phase” of novae. The event is also called an X-ray ignition flash and could help astronomers understand what causes these stellar explosions. The results of the study were published today in Nature.

What’s New — On July 7, 2020, the eROSITA X-ray instrument detected a bright blaze of X-rays from a spot where it had seen nothing on 22 previous scans. Eight hours later on eROSITA’s next pass, the sky was dark again, at least in the X-ray wavelengths.

A few days later, other observatories spotted a bright light in the same place, but this time the light was in optical wavelengths, not X-ray. The light source turned out to be the second-brightest nova of the last decade, and at its brightest (4.1 days after eROSITA saw the X-ray flash), keen observers here on Earth could see it with the unaided eye.

What eROSITA saw, according to University of Erlangen-Nuremberg astrophysicist Ole Koenig and his colleagues, was a phenomenon that astrophysicists had predicted but never seen. It’s called an X-ray ignition flash or, more dramatically, the fireball phase of a nova. The “new and extremely bright” X-ray fireball marked the moment just before the white dwarf star MGAB-V207 blasted most of its outer layers into space at several thousand kilometers per second.

White dwarfs are the super-dense remnants of medium-mass stars that have burned up all of their fuel. The Sun will one day be a white dwarf. When a white dwarf is part of a binary star system, its gravity often pulls gas away from its companion star. All of that accreted gas piles atop the already super-densely-packed material of the white dwarf, and eventually, the heat and pressure in its deeper layers increase enough to begin fusing hydrogen into helium.

Once fusion starts, it sets off a chain reaction ending with the outer layers of the star fully engulfed in what astrophysicists call a thermonuclear runaway. Five to 10 minutes later, the immense energy from that global nuclear firestorm reaches the white dwarf’s surface, or photosphere, where it’s visible as a bright flare of X-rays: an X-ray ignition flash.

Why X-rays? Everything in the universe emits some radiation. The spectrum of wavelengths in that radiation depends on the object’s temperature. Hotter objects tend to emit shorter wavelengths. Because the surface of the white dwarf is about 1 million Kelvin at the moment of the ignition flash, its radiation peaks in the X-ray part of the spectrum.

At the same moment the energy reaches the surface, the extreme heat causes the envelope of gas around the star to expand, which is a very mild way of saying that the envelope explodes outward at roughly 3,700 miles per second. It cools as the hot gas expands, so its radiation shifts toward longer wavelengths. That’s why the nova became visible in the optical spectrum a few hours after the X-ray fireball phase.

Here’s the Background — Scientists had long predicted that the fireball phase should happen moments after a nova begins, just before the star blasts its heated gas into space. But until July 2020, nobody had seen evidence that a nova’s early moments worked the way the physicists’ models predicted.

The observation from eROSITA was brief – just 35.8 seconds until the instrument moved on to scanning another part of the sky – but “it confirms that the predicted X-ray flash is actually there,” Koenig tells Inverse. “Overall, I think it's fair to say that we see a very good agreement of the theory and observation.”

Astrophysicists got incredibly lucky. Based on how often novae happen in our galaxy, eROSITA may only see one or two during its planned four-year survey (which is currently on hold due to Russia’s war in Ukraine – more on that below). And the instrument happened to be pointed at MGAB-V207 for just the right few seconds to catch the ignition flash in action – mostly.

Koenig and his colleagues measured the temperature of the X-ray flash at 330,000 Kelvin, quite a bit cooler than the 1 million Kelvin physicists predict for the fireball phase at its peak. Meanwhile, their analysis suggested that the star was a little larger than a typical white dwarf. In other words, MGAB-V207 had already started to expand a little bit when eROSITA glanced its way, Koenig says.

But the nova was still blazing hot enough to emit X-rays, which means the fireball phase wasn't quite over.

“The fact that we caught the event when it was still so close to the white dwarf was quite lucky,” Koenig says.

Why It Matters — The fireball phase was the only part of the nova’s lifespan that astrophysicists hadn’t yet seen and studied, an astronomical missing link. As Koenig and his colleagues wrote in their paper, the new observation “completes the whole picture” of how a nova evolves, from ignition to a slow fade.

Because the ignition flash happens early in the nova, studying it in more detail could help answer even more questions about white dwarfs and their binary companion stars.

“By studying the absorption, we can make estimates about how much material is present in the binary system *before* the whole system gets completely changed due to the nova,” Koenig says. The length of the flash, for example, is related to the mass of the white dwarf; a shorter, higher-energy flash means a more massive star. Since the flash from MGAB-V207 lasted less than 8 hours, the white dwarf probably had about the same mass as our Sun, packed into a sphere about the size of Earth – until it ejected its outer layers.

The spectra, luminosity, and other features of ignition flashes can also reveal the chemical composition of the white dwarf and how quickly it’s accreting gas from its companion star. If astrophysicists can get very lucky a few more times, the information contained in X-ray ignition flashes could shed some light on how binary star systems work in a more general sense.

And Koenig suggests that kind of data could reveal more diversity in binary star systems than expected. “Detecting more X-ray flashes could yield a wide variety of in behavior of these systems,” he tells Inverse.

What’s Next — Koenig and his colleagues hope to search for more x-ray ignition flashes in eROSITA’s data.

The instrument is slated to complete eight full-sky surveys by 2024, but its operations have been suspended since late February, so Koenig and his colleagues may not be able to count on eROSITA to search for future ignition flashes. However, they can still comb through the four complete sky surveys’ worth of data eROSITA has already collected.

Why? Because eROSITA is aboard the joint Russian-German space observatory SRG (Spectrum-Roentgen-Gamma). Following Russia’s invasion of Ukraine, the Max Planck Institute for Extraterrestrial Physics, which operates eROSITA, placed the instrument in safe mode on February 26, “following the recommendation to freeze co-operation with Russia,” according to a statement.

In addition to searching eROSITA’s existing data for x-ray ignition flashes, Koenig says, “it would be great to […] propose for another satellite with higher spatial resolution and sensitivity to find more of the flashes.”

The astrophysicists would also like to watch an ignition flash for longer than a few seconds.

“There are certainly still questions: For example how the X-ray flash decays, or how fast the envelope expands,” Koenig says.

What do we know about Sagittarius A*, the monster black hole in the heart of our galaxy?
There's big news on the "event" horizon: For the first time tonight, we'll get a good look at the supermassive…

Just as the Earth's magnetic field inverts every few million years, black holes may do the same

Salon
We've seen the black hole called Sagittarius A* at the middle of the Milky Way. Now what?

There's a monster twirling around in the centre of our galaxy, and its portrait has finally been unveiled. So what…

A new analysis of the early universe shows quasars with growth capped by surrounding matter.