"There's nothing in this Budget that eases our concerns about the hardship that many communities are facing."

That's the view of the CEO of one of the UK's busiest foodbanks, Newcastle West End Foodbank, following Chancellor Kwasi Kwarteng's mini-Budget announcement on Friday morning. A lift on the cap on bankers' bonuses and an axe of the planned rise to corporation tax, which will remain at 19%, are among the changes introduced as part of the new Conservative Government's Budget.

Other changes include a drop in the amount of income tax payable by those earning more than £150,000 a year, from 45% to the 40% applicable to those on over £50,271, as well as plans to make around 120,000 more people on Universal Credit take active steps to seek more and better-paid work, or face having their benefits reduced.

Reflecting on the mini-Budget, John McCorry, CEO at Newcastle's West End Foodbank, said: "At the very least it's very disappointing for working families and families on benefits. It does not offer any real response to addressing the financial crisis that people are in at the moment.

"It's an opportunity missed and it's disappointing that this new Government didn't take the opportunity to respond to the needs of working people. I think that by the time this 'trickle down' economics approach that their suggesting will work in the economy, an awful lot of hardship and pain will have been felt by people who are struggling right now to get by."

He added: "In terms of a small charity trying to deal with poverty and insecurity, there's nothing in this Budget that eases our concerns about the hardship that many communities are facing."

It's a view echoed by Angie Comerford, who runs Hebburn Helps community foodbank, who described the Budget as no light at the end of the tunnel.

Angie said: "It's the Tories making sure the rich are going to be richer while the rest of us are going to be screwed. The child poverty rates in South Tyneside are through the roof, but what's in the Budget that's going to help them?

"People are in dire straits. Since Monday I've had seven people get in touch who need help with their gas and electric bills and it's not something we can help with because we don't have the funding or provisions for it.

"I hoped there would have been something in the Budget that was going to help people who need it most. But instead we're cutting the cap on bankers' bonuses and income tax for the top earners, it's scary.

"It feels like we've been holding out for a light at the end of the tunnel but all we can see is black."

Responding to the announcements in today's mini-Budget, Chair of the North East Child Poverty Commission, Anna Turley, said: "Today was an opportunity for the new Chancellor to show families across the region that he is on their side, and that he understands the gravity of the situation so many are now facing in the face of soaring household bills and mounting levels of debt.

"Instead, families in the North East already struggling to keep their heads above water – both in and out of work – heard absolutely nothing about how the Government intends to protect them from severe hardship in the coming months. We also – still – have no long-term plan to improve the living standards of families and children.

"The disconnect between the announcements made today, and the reality of rising child poverty in every part our region, is absolutely astonishing. It is just unthinkable that babies, children and young people across the North East will pay for the price for this failure to act, and now face yet more months and years of going without. The prospect of communities in the North East being ‘levelled up’ sadly appears to have become ever more distant."

Cedarwood Trust helps thousands of people a year who are living in poverty in and around the Meadow Well Estate in North Shields, one of the country's most deprived areas. It has seen a huge increase in the number of people it has helped during the recent cost-of-living crisis.

The trust runs a Food Membership Scheme where people can take around £16 of food and household goods a week for just £4. It now has 520 people signed up to the scheme and is signing a new member/family up, on average, every day. Around 44 people a day come in to use the service.

He said: "We welcome any action taken by the Government to combat the cost of living crisis – anything that helps the economy, keeps businesses running, is good news. If the Government hadn't reversed the National Insurance contribution increase and capped energy bills for businesses, the reality is people would lose employment as employers would cut their workforce in a bid to save money.

"This cut also means that people already squeezed by this crisis are not getting themselves into further debt. However, in the opinion of Cedarwood Trust the Government have still not done enough for ordinary people who are struggling.

"They have cut Stamp Duty, but how does that help people who never have, and never will, own a property in their life?

"A cap on energy is welcome, but the damage has already been done - people living on the breadline are already struggling with bills that are much higher than they were a year ago, and they will continue to do so.

"They have frozen the duty on alcohol, but the cost of food and essentials is still driving up the cost of living - what are you going to do help the people who can't afford to buy a tube of toothpaste that now costs £2, up from £1 a year ago?

"Food security is such a huge thing especially as we move towards the winter when temperatures will drop, people will have to use their boilers more for the heating and people are going to be in a position where they have to choose between heating and eating.

"Ultimately, the mini-Budget is relying on trickle-down economics – helping the people at the top of the food chain, like bankers whose bonus cap has been scrapped, and corporations who will pay lower taxes – and expecting this to help those on the bottom.

"The ordinary person on the street, however, needs more direct support. It is not good enough." 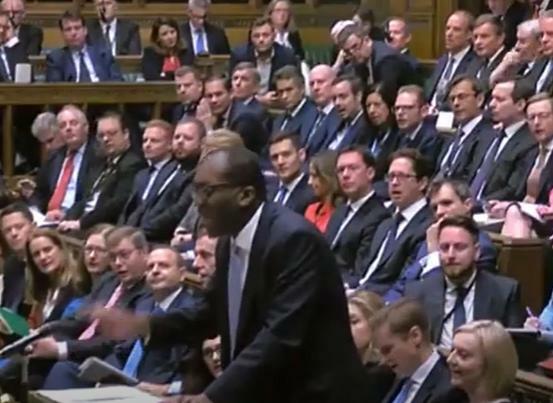 The National (Scotland)
From analysis to the latest developments in health, read the most diverse news in one place.
'Reckless and irresponsible' – North East Labour MPs' tax cut fury after mini-budget 'for the rich'

Chancellor Kwasi Kwarteng announced a huge set of measures on Friday, including abolishing the top rate of income tax for…

The money expert explained how people would be impacted by the Government's announcements, including the 1p cut to Income Tax

The National (Scotland)
'More money for millionaires than for the North': Greater Manchester Labour leaders react to mini-budget

Many were quick to have their say after this morning's announcement.

Manchester Evening News
One place to find news on any topic, from hundreds of sites.
Mini-budget 2022 - latest: Kwasi Kwarteng to unveil plan to cut taxes and reduce energy bills