By Angela Giuffrida in Venice

As tourists posed for selfies at St Mark’s Square on Wednesday evening, shop owners mopped the floors of their premises and cleared debris while assessing the cost of the damage caused by record high tides.

“An apocalypse happened,” said Antonella Rossi, who owns a handmade jewellery shop under the portico that surrounds the square.

“We haven’t seen anything like this in 55 years. The water has destroyed everything, and I will have to redo so much – work that took a lifetime was wrecked in seconds.”

After the worst floods since the 1960s, St Mark’s Square was submerged by more than one metre of water on Wednesday and the adjacent St Mark’s Basilica flooded for the sixth time in 1,200 years – but the fourth in the last two decades.

Simone Travagin, who runs a shop selling traditional Venetian masks, estimated that around €40,000 (£34,000) worth of merchandise had been destroyed. “I’ll have to throw it all away,” he said.

Venice leaders spoke of “great devastation” to museums, monuments and homes after flood levels reached 1.87 metres on Tuesday night amid heavy rain, just shy of the record 1.94 metres measured in 1966.

Another deluge engulfed the city on Wednesday morning, causing the acqua alta, or high water, to reach 1.60 metres. Most of the water had receded by the afternoon, but residents are bracing themselves for more to come as forecasts predicted high tides of 1.20 metres late on Wednesday night and 1.30 metres on Thursday morning.

“We feel helpless in the face of nature, but we are also disappointed that either politics or technology has failed,” said Claudio Vernier, president of the St Mark’s Square Traders’ Association. “They’ve been talking about defending this city for decades but that’s all they do – talk.”

The city’s schools and museums were closed on Wednesday, as was St Mark’s Basilica. The last time water filled the 1,000-year-old cathedral was in November 2018, with the cost to repair its marble floors and bronze metal doors estimated at €2.2m.

“Think of it this way – each time there’s a flood, damage is done and it takes time to heal,” said Marco Piana, an administrator at St Mark’s Basilica. “Then a subsequent flood happens and the healing process gets interrupted, so the initial damage done never fully recovers.”

Piana laid the blame flatly at the authorities’ failure to complete the €6bn Mose project, designed in 1984 to protect Venice from high tides but still not in operation. Work began in 2003 but has been dogged by delays and myriad issues, including a corruption scandal that emerged in 2014. The Venice mayor, Luigi Brugnaro, promised on Wednesday that the flood barrier would be completed.

As part of the project, an artificial island was built in between Venice Lido and Cavallino-Treporti to separate two rows of barrier gates and to house the main technical buildings for the operation of the gates.

“The Mose project has been an epic failure,” said Marco Gasparinetti, who leads the city’s Gruppo Aprile 25 activists. “The artificial island has completely changed the lagoon and caused the speed of the sea water entering to accelerate. In fact, the lagoon is no longer a lagoon – the kind of waves we had yesterday are the kind you get in the open sea.”

Tourists, who earlier in the day had been wading through thigh-deep water, seemed mostly oblivious to the destruction as they enjoyed dinner in the restaurants that remained open in the vicinity of St Mark’s Square.

But the city and its inhabitants will take a long time to recover.

“Of course, this is an exceptional event but the problem is not unusual for Venice, and with the effects of climate change, there will be more floods. For more than 30 years they’ve been talking about solutions to keep Venice safe, but it’s just blah blah blah.” 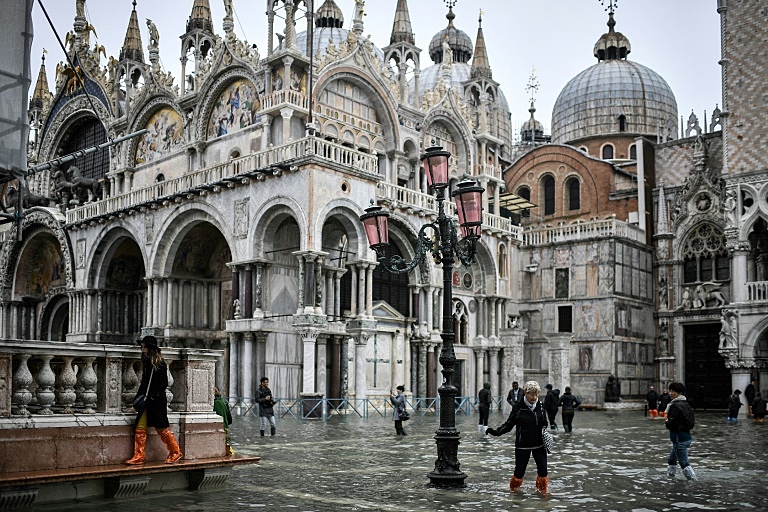 Climate change, corruption blamed for Venice flood devastation
Venice (AFP) - Much of Venice was left under water after the highest tide in 50 years ripped through the…

AFP
One subscription that gives you access to news from hundreds of sites
Venetians rage at flood-defence delay: 'They don’t think of us'

An incredibly high tide in Venice has flooded the city, the highest in 50 years.Two people have died and hundreds…

'The situation is dramatic,' city's mayor tweets. 'We ask the government to help us. The cost will be high'