An ‘affront’ to democracy: Christian Porter has questions to answer. So does the PM 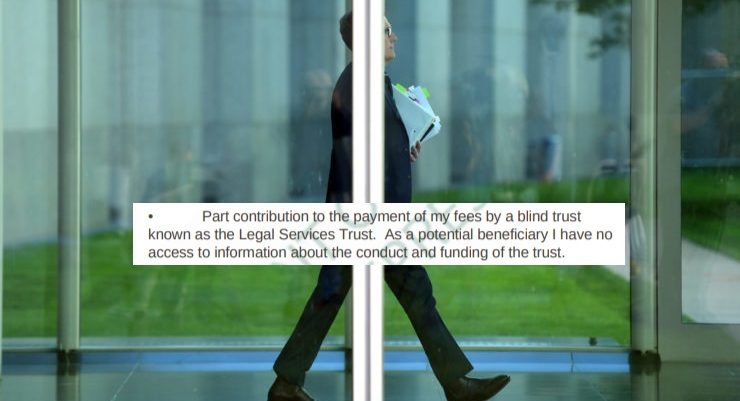 Christian Porter has just thrown a bomb under the government. By taking an undisclosed amount of money from a secret benefactor, he risks undermining some of the most basic principles of democracy: disclosing your financial interests.

The public is unlikely to accept that a sitting politician should be able to receive a bag of unmarked bills from an anonymous donor. Who’s to say the money isn’t coming from a foreign government?

It also puts the prime minister in a bind — is he really going to stand by while this happens?

Anthony Whealy QC, a former justice of the Supreme Court of NSW Court of Appeal and chairman of the Centre for Public Integrity, said the matter went way beyond a disclosure issue.

“This is an affront to our democratic principles, to have the concealment of major funding like this,” he told Crikey.

“It goes far beyond a slip up of disclosing something like Barry O’Farrell and his bottle of Grange. The public are entitled to know where this money comes from and if he doesn’t disclose it he is deliberately concealing it from the public.”

Porter’s position may be untenable unless he hands back the money or reveals who his benefactors are. In his declaration, he has claimed that as he is a potential beneficiary to the blind trust, he had “no access to information about the conduct and funding of the trust”.

But this still doesn’t explain some basic mechanical questions. Where did the money turn up? And if it was in his bank account, how did the trust get his bank account details? Who told him the money was coming? And what steps has he taken to try to find out who was behind it?

Then there are the bigger questions about his decision to accept the money, such as:

The prime minister also has questions to answer, namely: