Banwarilal Purohit: An ‘active’ Governor who was not in sync with popular political mood 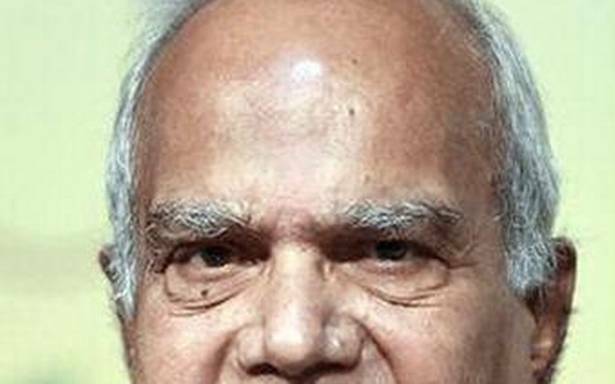 Banwarilal Purohit, who has served Tamil Nadu for almost four years and has now been shifted to Punjab, is one of the highly visible and controversial Governors.

It was not for the first time that the State had an “active Governor”, but Mr. Purohit chose not to be in sync with the State’s popular political mood, as could be seen from his stand on the release of the seven life convicts in the Rajiv Gandhi assassination case. He did not let himself swayed even by the recommendation of the Council of Ministers, headed by Edappadi K. Palaniswami, though he cleared the decision of the AIADMK government to free three convicts in the case of Dharmapuri bus burning, in which three girl students of Tamil Nadu Agricultural University were charred.

At the same time, he was seen as someone who seriously followed up on his predecessor Ch. Vidyasagar Rao’s initiative to streamline the appointment of Vice-Chancellors because the State had acquired notoriety in the matter. During his tenure, the expenditure at the Raj Bhavan was cut and the place was made accessible to the public

E. Balagurusamy, former Vice-Chancellor of Anna University and former Member of the State Planning Commission, lauds Mr. Purohit for having done an “excellent job”. Never before had a Governor “personally interviewed” applicants for Vice-Chancellor. “And he did it in a transparent way,” the academic says, hoping for his successor to follow suit.

However, Mr. Purohit courted controversy for more than one reason. Within a month of assuming office, he began visiting districts and interacting with officials to assess the progress of schemes. A row erupted in the early 2020 over his decision to contribute ₹2 crore out of the Governor’s discretionary grants to a free breakfast programme implemented by a non-governmental organisation for students of the Greater Chennai Corporation schools.

Mr. Purohit was criticised a year ago for the time he took to sign on the Bill to provide 7.5% horizontal reservation for NEET-qualified students of government schools in admission to undergraduate medical courses. His critics were unimpressed with his explanation that he had waited for Solicitor-General Tushar Mehta’s opinion.

A long-time observer of Tamil Nadu politics says that in the last 50 years, K.K. Shah in the 1970s and Channa Reddy in the 1990s were also known as “controversial and active” Governors. But Mr. Purohit differed from them as he was viewed as the previous government’s “mentor”, too, despite his differences with it on a number of matters.