The lack of a strong foothold in south India where summer starts early has weighed on its market share.

However, it expects to regain the lost market share through customer centric schemes and other initiatives. However, in an industry with limited product differentiation, such efforts would impact margin. In Q4, Voltas’ unitary cooling products segment, contributing 69% of consolidated revenues, rose by 10% year-on-year (y-o-y) to ₹1,818 crore.

Voltas hiked prices, but this was not enough. Overall, earnings before interest, taxes, depreciation and amortization (Ebitda) margin fell to 9.8% from 12.5% in the same period last year.

In FY22, Voltas hiked prices in the room AC category by 12–15%. If commodity costs continue to rise, then it would look for further price increases. However, this would be easier said than done.

“Voltas is already on an average 2-3% higher priced versus peers. Competitors are focusing on increasing volumes, leading to price disruption. We believe Voltas would also be forced to match competitors’ pricing resulting in margin pressure," said analysts at Kotak Institutional Equities in a report on 9 May.

That’s not all. The outlook seems gloomy with the peak season of primary sales nearing its end.

Investors seem to have taken note. Voltas’ shares have dropped by 14.6% since Q4 results were out on Thursday post market hours. The stock is now hovering over 52-week lows seen in May 2021 on NSE.

Voltas’ premium valuations versus peers have come off because of market share losses amid increased competitive intensity and concerns on margin erosion, analysts pointed out.

Shares of Voltas have risen by just 2% in the past one year but those of Blue Star have gained 23%. Credit Suisse Securities (India) Pvt. Ltd’s sum-of-the-parts valuation for the Voltas stock attributes about 60% of the value to the cooling business.

The broking firm has cut the target price of Voltas’ stock to ₹975 from ₹1,225. However, if the company regains its market share, it would be a positive. 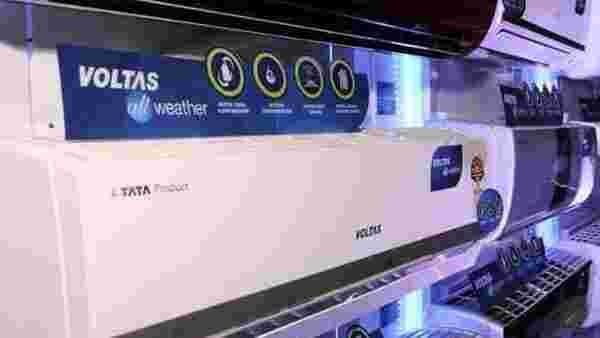 Temperatures are soaring but Voltas unable to find its cool
The company, which derives a good share of revenues by selling room air conditioners (ACs), put up a weak Q4…