Americans are planting mystery seeds the government has warned against

By Amanda Holpuch in New York

Americans have been planting mystery seeds which appeared to be sent from China, unaware of government warnings to dispose of the suspicious shipments.

Four people who have come forward after apparently randomly receiving the seeds have since contacted their local agricultural departments to collect the resulting mystery plants – or in some cases, fruitless seeds.

Tiffany Lowery, of Kentucky, said she had thought the seeds were sent from her planting club. “I didn’t realize it was a thing until I saw it on the news,” Lowery, who ended up with a bright green-leafed plant, told WBKO news.

Patricia Smith, of Texas, also thought the seeds were a gift from a group she is in. “I planted them in a pot, they never came up, so I didn’t think any more of it,” Smith told KXII news.

Shelley Aucoin, in Louisiana, said she had bought seeds from online retailer Amazon, so she planted the ones she received in the mail.

“Then we saw the post saying don’t plant them,” Aucoin told WAFB news. “I mean, I’m not scared about it, I’m not worried about it, but I guess people are.”

“We brought them down here and planted the seeds just to see what would happen, every two weeks I’d come by and put Miracle Grow on it and they just started growing like crazy,” Doyle Crenshaw, of Arkansas, told local news channel 5News.

Crenshaw said he planted the seeds in his garden months ago and they produced large white fruit and orange flowers, resembling a squash plant.

The US Department of Agriculture warned people last month not to plant the seeds and to keep them in their original packaging after more than a dozen states reported receiving the mystery packets in the mail. People who receive the seeds are also instructed to contact their local agricultural office.

The USDA’s Animal and Plant Health Inspection Service (APHIS) said in a release: “Seeds for planting pose a significant risk for US agriculture and natural resources because they can carry seed-borne viruses or other diseases.”

The agency’s preliminary analysis has shown the seed packets included a mix of ornamental, fruit, vegetable, herb and weed species – as in weeds, not, apparently, “weed”. It also said the agency did not link the seeds to “agro-terrorism”.

So far, the agency said the most likely reason these seeds are being sent around is because of an online scam where sellers try to boost sales by sending unsolicited items to unsuspecting customers, then post false online reviews of the item.

US Customs and Border Protection, which is helping with the USDA investigation, has in recent years intercepted similar seed shipments. 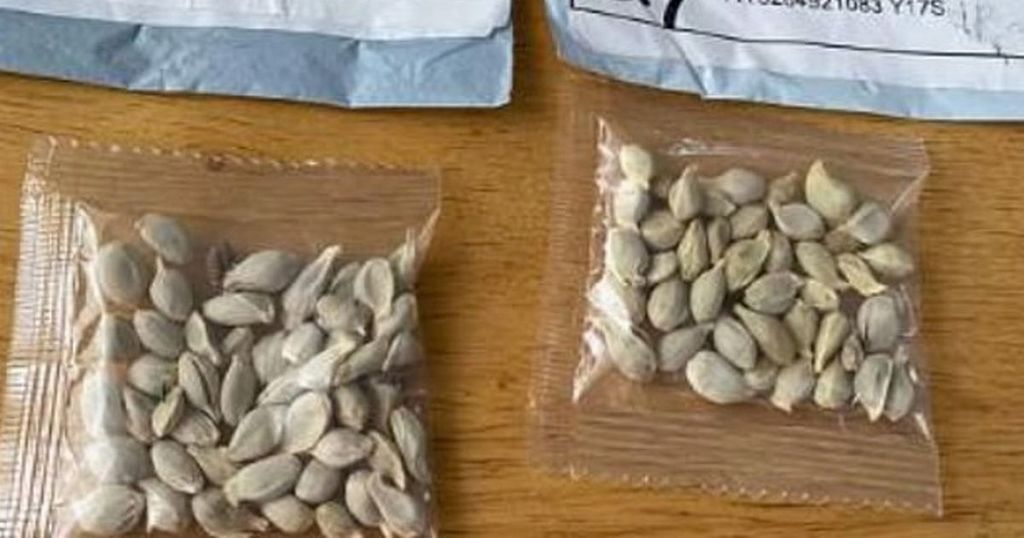 Mystery seed packets from China could 'wreak havoc' and destroy wildlife, officials warn
Officials claim to have identified several of the plant species as mysterious packets of seeds are received by confused homeowners…