America’s New Stealth Drone Appears To Be Operational Near China 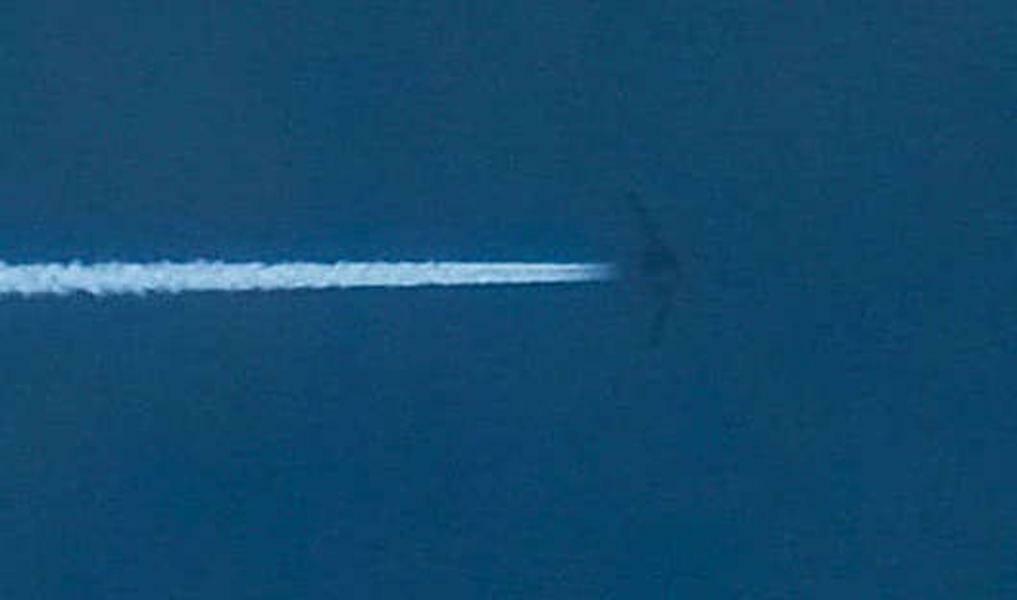 An aircraft that appears to be the U.S. Air Force’s secret RQ-180 stealth spy drone has been photographed flying over the Philippines.

The photo appears to back up reporting that the jet-powered, batwing RQ-180—in essence a weaponless, pilotless stealth bomber—is flying from Guam for operations around China.

Michael Fugnit, a self-described “skywatcher,” was in Sorogon, in Luzon south of Manila, when he saw—but didn’t hear—an aircraft high overhead.

His photo, which quickly circulated on social media, depicts a flying wing aircraft trailing a contrail.

The shape and contrail match those in a photo that plane-spotter Rob Kolinsky snapped near Edwards Air Force Base in California in October.

They also match the description of the RQ-180 that has been emerging in the media since Aviation Week reporters Amy Butler and Bill Sweetman broke the news of the RQ-180’s existence back in late 2013.

The RQ-180, which reportedly is a Northrop Grumman product, meets an obvious need on the part of the U.S. Air Force for long-range, penetrating aerial reconnaissance in highly defended enemy air space.

Satellites see everywhere but their tracks are predictable and inflexible. Non-stealthy drones such as Northrop’s RQ-4 Global Hawk are vulnerable to air defenses—as Iran proved when it shot down one of the drones in 2019.

The Air Force operates at least one other stealth spy drone, the Lockheed Martin RQ-170 Sentinel. But the RQ-170 is small—just 66 feet from wingtip to wingtip. The Sentinel’s small size translates into limited altitude and range performance.

The RQ-170 also is compromised. One of the drones crashed on the Iran-Afghanistan border in December 2011. Iranian agents quickly scooped up the wreckage. Iranian industry quickly produced copies of the drone, of dubious quality.

The RQ-180—which crews reportedly call “Shikaka” after a fictional bat—does what satellites, Global Hawks and Sentinels cannot do. With its estimated 130-foot wingspan, it flies high over a distance of potentially thousands of miles, on short notice and through enemy defenses, if necessary.

Think of the RQ-180 as an enabler. The Air Force has 20 B-2s and is in the process of acquiring up to 149 new B-21s, also from Northrop. The stealth bombers in theory could strike targets within range of Chinese air-defenses.

But their crews need to know where the targets are. That gets harder when the targets—army units, warships, missile-launchers and aircraft on the ground—can move. RQ-180s could keep track of mobile Chinese forces for the B-2s and B-21s to strike.

The Air Force for years has been building up its Pacific stealth drone force. According to a redacted annual report from the Air Force’s Air Combat Command, the USAF back in 2009 began staging RQ-170s in Guam.

The RQ-180s reportedly began arriving around 2016, when the Air Force’s 9th Operations Group based at Beale Air Force Base in California—the stealth drone’s main operator—set up a detachment in Guam.

It’s unclear how many RQ-180s the Air Force possesses, how quickly the Air Force is buying additional copies or how much each RQ-180 costs.

Aviation Week claimed there were seven RQ-180s in service as of 2019. If the RQ-180s replace RQ-4s on a one-for-one basis, the Air Force eventually could buy two or three dozen of the type. If the stealth spy drone is as expensive as the B-21 is, it might cost half a billion dollars per copy.

As recently as this summer, the Air Force was assuring lawmakers the service safely could retire the RQ-4 because it’s “bringing on … a family of systems” for intelligence, surveillance and reconnaissance, according to Lt. Gen. David Nahom, deputy chief of staff for plans and programs.

That new family of systems should be fully operational some time between 2027 and 2029, Nahom said. But if Fugnit’s photo is any indication, the RQ-180 already is operational—at least in a limited capacity.