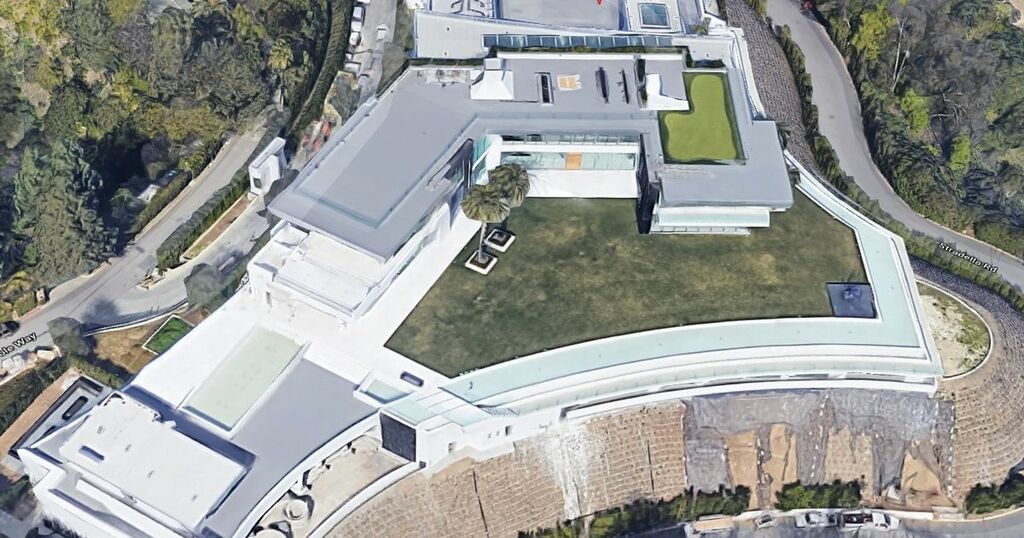 In the land of mega-mansions, one sprawling home stands tall even amongst its multi-million dollar neighbours.

Fittingly named 'The One', the $500million estate is the most audacious example of the lavish billionaire trend that inspired the Netflix smash hit Selling Sunset.

Yet, less than a year after going on the market, the sun appears to be setting on the project cooked up by Nile Niami, a film producer turned 'giga mansion' tycoon.

Last week, The One - dubbed America's most expensive home - went into receivership and will be sold for a lower price after its owner defaulted on more than $165million in debt.

The 105,000-square-foot Bel Air property is said to be twice as big as the White House and Niami began construction back in 2012, hoping to flip it for a profit.

Now, with his hopes for a record-breaking sale crumbling, who is the flamboyant developer - and how did his dream fall short?

Born in Los Angeles, Niami began his career chasing the Hollywood dream as a movie producer.

Working primarily on B movies in the late 90s, he produced films including Point Blank, but quickly realised there was more money to be made in property.

"In the film business, you can't really control things, because there are too many hands in the pot," he told GQ. "Here, it's just me."

Changing careers to become a developer, he started remodelling smaller homes and making new ones from scratch.

But in 2008, Niami was alerted to the growing number of 'mega homes' selling for more than $10million.

He realised there was bigger - and quicker - money to be made by flipping over properties in exclusive celeb neighbourhoods like The Bird Streets, which house A-list stars like Leonardo DiCaprio, Matthew Perry and Jodie Foster

"For the $5 million houses, the buyers still needed loans," he said.

Now said to be worth around $50million himself, the entrepreneur has become the embodiment of the lifestyle he tries to sell to his multi-millionaire clients.

On his Instagram page, which boasts nearly 100,000 followers, he regularly shows off his glamorous adventures, posing on motorcycles and on trips to Egypt, while - of course - showcasing some of his ridiculous houses, which feature supercars glistening on revolving platforms.

Plans for 'The One' included nightclub, casino and 20 bedrooms

Chasing ever more audacious projects, Niami in 2012 teamed up with architect Paul McClean to begin work on 'The One'.

Snapping up the site for $28 million, he set about cutting off the top of the hill to ensure its eventual owners could enjoy 360 degree views.

Original plans for the home included a cinema, bowling alley, beauty salon, no less than five pools, a nightclub and casino - as well as 20 bedrooms.

The largest of those is said to be a 5,500 sq ft master suite, with its own office, pool and kitchen.

Picking up on the 'whitewash' trends of celebrity homes like the Kardashians', McClean has said he favours pale coloured designs for the interior - which even extend to the unusual furnishings.

"Nobody really reads books, so I'm just going to fill the shelves with white books, for looks," Niami told GQ.

"I really think that this house is going to do a lot for LA. Anybody who lives in the area is going to be proud to be near it."

In true Selling Sunset style, The Telegraph reported that prospective buyers to the pair's previous projects were dazzled with promo films of semi-naked women cavorting on beds.

"We are in the business of selling a fantasy," McClean told the newspaper.

"With Nile, we're trying to sell a lifestyle, a sense of how people imagine they would live."

Originally set to be completed in 2017, it appears the fantasy has crashed up against reality for Niles and McClean.

Beset by financing and construction problems, the design has undergone several rethinks - the bedrooms slashed to nine and plans scrapped for an extravagant jellyfish tank.

Over the past four years, Niami and his related LLC, Crestlloyd, have borrowed more than $165million to build and sell “The One,” according to property documents, CNBC reports.

A year after the project's original end date, $82.5million was borrowed from Hankey Investment Co, which issued a repayment deadline of October 2020.

According to Mail Online, the real estate pioneer also fell out with neighbours after allegedly holding illegal parties during the Covid lockdowns.

The news website was told by residents it was like living in a "nightclub" with maskless visitors taken up to the homes on buses.

Niami denied holding the parties at the time.

However, with debts on 'The One' - which is still not fully finished - said to be in excess of $165million, there is no denying the businessman's original vision has fallen short.

Despite putting the home on sale in January, Niami has failed to find further financing or, more crucially, a buyer.

Placing the property into receivership last week, Los Angeles County Superior Court named Ted Lanes, of Lanes Management, as the receiver to place it for sale.

"What I would love to see happen is that the house gets completed, the certificate of occupancy is awarded and we have an orderly sale that maximizes the value," Lanes told NBC.

"Hopefully, there will be sufficient proceeds from the sale to fund the secured and unsecured creditors and for the equity to realize some value."

Since the pandemic, the market for mega-mansions has crumbled, with desperate sellers forced to slash prices.

With 'The One' originally tipped to sell for hundreds of millions more, perhaps it's a price that even the world's richest man would try to barter down.