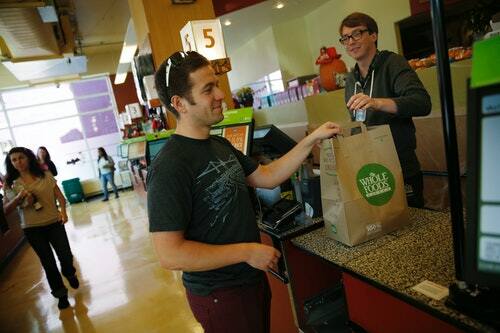 Amazon is finally going to introduce its cashierless, “Just Walk Out” technology to Whole Foods locations beginning next year. The company will start with two new locations, one in Washington, DC, and the other in Sherman Oaks, California.

With the technology, customers can choose the option of picking their items and having their Amazon accounts automatically billed for whatever they take out of the store. If they’d prefer to not use an Amazon account, customers can also pay at a traditional self-checkout kiosk or at the customer service desk.

Amazon recently introduced palm scanning to Just Walk Out, so that customers at its Amazon Go and Go Grocery stores can authenticate with their Amazon accounts simply placing their hand on a scanner when they enter the store.

Just Walk Out uses an array of cameras and sensors to figure out what customers pick up. The technology was first introduced in Amazon Go convenience stores, but Amazon has since opened a full-sized grocery store that supports it. Challenging to scaling the idea has been using sensors to correctly bill customers for produce or meat that’s priced by weight. Amazon addressed that in its Amazon Grocery stores using weight scales and new shopping carts with barcode scanners that can bill for variably priced items, like sliced deli meat.

There was always the obvious question of when Amazon might introduce the technology in Whole Foods, the upscale grocery chain it acquired in 2017. The company is starting with new locations — its cashierless tech is embedded all over a store, including on the ceilings, and therefore requires a lot of work to get installed.

Of course, a bigger question is whether we as consumers actually need that couple minutes of time savings, and at what cost? It feels like something of a cliché solution to a first-world problem dreamt up by founder Jeff Bezos, one that could eliminate jobs and not even solve a real problem for most people who aren’t extremely strapped for time.

Amazon at least says that its cashierless Whole Foods locations will hire a comparable amount of staff, who will spend time doing other work like helping customers. For now at least.

The common wisdom is that Amazon wants to sell everything, but the grocery sector is perhaps the one retail sector that it has yet failed to dominate. The market is huge, however, at over $700 billion annually. And groceries are something people buy frequently, more so than random goods on Amazon. If it nails grocery, consumers would turn to Amazon for all their needs and it can continue to dominate through size and efficiency.

Cashierless tech can theoretically help Amazon stand out in grocery by promoting its “customer obsession” and giving it useful data to feed its optimized supply chain. The company also makes a lot of money today through advertising, which the data could support to keep costs down for customers.

Besides its own stores, Amazon is also licensing its technology to other companies who might want to offer a smooth checkout experience. It’s probably not going to ever have the same dominance in the grocery sector that it has in e-commerce, but licensing to smaller, local chains could be a fresh pillar of revenue for it, much like Amazon Web Services which started out as a side hustle for the retail giant but is now one of the dominant players in the sector and a massive revenue driver for its parent company.