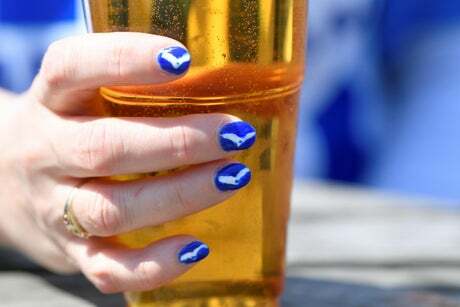 The continued high level of incidents being reported to the police at football matches shows now is not the right time to consider letting fans drink in sight of the pitch, the UK’s football policing lead has said.

Data released by the Home Office on Thursday morning showed incidents were reported at 37 per cent of the matches played in England and Wales in the 2020-21 season where spectators were allowed.

The data, which covered the period between August 1, 2020 and July 31, 2021, comes as a fan-led review chaired by Conservative MP Tracey Crouch is set to recommend a pilot allowing supporters at matches in League Two and the National League to drink in the stand or in their seat.

"This trend shows now is not the time to be having discussions about making big changes at football grounds, such as allowing fans to drink alcohol in their seats," he said.

"It is evident there is a link between alcohol and many of these offences and one of the principal safety measures introduced by the Taylor report has already been unpicked by reintroducing standing areas.

"Allowing drinking in seats would fuel disorderly behaviour and is unnecessary as spectators are allowed to drink on concourses - to make this change would be irresponsible.

"Whenever there is a high-profile incident of disorder there are calls to clamp down and tackle the issues, which means taking sensible decisions about policy and legislation."

Incidents were reported at 79 of the 212 matches not played entirely behind closed doors in the 2020-21 season, the Home Office report said.

It was an absolute honour to be part of @KensingtonRoyal visit to @DulwichHamletFC to discuss in further detail the fan led review and it's importance for the future of English football, wherever you sit with the pyramid pic.twitter.com/Pkzd8eN6sA

The report also found there were 116 football-related arrests during the period, including 92 related to England matches.

The disorder at the Wembley final has been the subject of a UEFA investigation. The Football Association is set to learn the outcome of that investigation within 24 hours of the personal hearing it has requested, which is due to take place on Monday.

England manager Gareth Southgate has previously said he fears a stadium ban could be imposed.

The Government said earlier this year it intends to extend banning orders to cover online abuse.

England players Marcus Rashford, Jadon Sancho and Bukayo Saka were all targeted by racist abuse online after they missed penalties in the final shoot-out defeat to Italy.

"Anyone who commits an offence either outside or inside a football ground can also expect to face the consequences of their actions. This behaviour will not be tolerated and is not something that the real fans attending football matches should have to witness.”