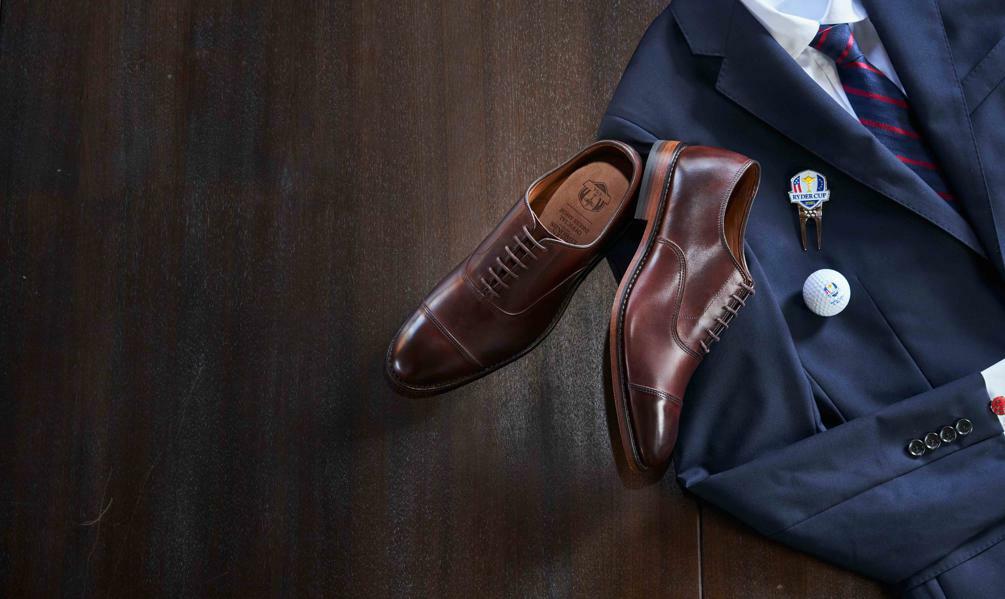 When Justin Thomas, Collin Morikawa and the rest of the 12-man American Ryder Cup squad slip off their soft spikes for more formal attire during the tournament’s opening ceremonies, they’ll be sporting a limited edition of Allen Edmonds’ bestselling Park Avenue cap-toe oxfords in mahogany.

The Caleres owned brand’s signature dress shoes have been customized for the occasion with the Ryder Cup logo embossed on the premium calfskin insole. The limited-edition look is also be available for purchase on the Allen Edmonds website.

The biennial grudge match pitting America’s best golfers in a team competition against the top players on the other side of the pond tees off at Whistling Straits in Kohler, Wisconsin on September 24th just 45 minutes from the Allen Edmonds factory in Port Washington.

“It was the icing on the cake to this perfect partnership. Not only are Team USA’s shoes being crafted in our factory but our team members will hand-deliver them the week of the event. It doesn’t get more personalized than that,” David Law, senior vice president and general manager at Allen Edmonds, says.

Patriotic values run deep in Allen Edmonds brand DNA. The premium shoe manufacturer and retailer began operations in 1922 and gained national traction when they became a supplier to the U.S. Army and Navy during WWII.

An avid golf fan, Law’s fondest Ryder Cup memory is the 1969 tournament held at Royal Birkdale in Southport, England. The competition ended in a 16-16 draw when in a show of remarkable sportsmanship Jack Nicklaus conceded a three-foot putt to his opponent Tony Jacklin on the 18th hole.

“Giving that last putt to Jacklin to halve the match, and have the first ever tied Ryder Cup, instead of making him hit it and potentially lose the tournament in front of his fans—this kind of class and sportsmanship is what made this such a memorable event between two iconic champion golfers,” Law says.

A few years back Allen Edmonds was named the official on-court shoe supplier of the NBA Coaches Association which was synergistic for the upscale brand as it’s known for its extended range of sizes. Coaches are typically former players so they tend to require longer and wider footwear than off the rack offerings provide. Law also sees natural parallels in the golf space and specifically within the pomp and circumstance of the Ryder Cup.

“Golf and Allen Edmonds share a culture centered on pride that comes with a passion and commitment to one’s craft and a spirit of innovation. As a pinnacle American lifestyle brand, we are proud to support such an historic event,” he says.

Allen Edmonds will celebrate their 100th anniversary next year, and while they’ll likely stick to their knitting, who knows, perhaps a golf shoe could be in the works? While the pandemic has lessened the consumer appetite for the dress shoe category, the company did enjoy a spike in demand for their sportier styles.

In the Fall of 2020, they launched a line of sneakers and more casual styles to capitalize on the growing opportunity in the active and casual space spurred by the work from home trend.