A convicted felon on parole has been charged with a deadly attack on two men this week inside Humboldt Park thanks to video evidence and a quick arrest by Chicago police, Cook County prosecutors said Thursday.

Officers chased 34-year-old John Corona after the Monday afternoon shooting into an alley near the park and arrested him as he tried to use a garbage can to climb over a fence, prosecutors said.

Inside the garbage can, the officers found a .40-caliber Glock handgun that matched 13 of the 20 shell casings recovered after the ambush attack in the 1300 block of East Luis Muñoz Marín Drive, prosecutors said.

Corona was wearing a crossbody satchel, red and white gym shoes and a black hoodie at the time of his arrest — the same clothing a police POD camera recorded him wearing just minutes before the shooting took place, prosecutors said.

In the footage, Corona was allegedly seen passing an object to one of the other two suspected shooters before all three opened fire at Antwon Gee, 35, and Devel Jones, 34, after they got out of a car in the block.

Both men were shot multiple times and pronounced dead on the scene, according to police. Prosecutors said neither was armed.

In the moments after the shooting, a woman ran up to the park and yelled, “I just talked to him. … Where’s my son?” Not long afterward, a young girl showed up crying and screaming, “Why did they have to kill my daddy. ... My daddy is dead.”

A witness in the park when the attack occurred told police she saw two men firing and began filming with her phone.

The woman couldn’t see the shooters’ faces clearly, but was able to record the path of one of the shooters, later identified as Corona, as he ran from the park and was pursued by police, prosecutors said.

The two other shooters got away.

One ran away on foot and was recorded by a surveillance cameras as he hid a 9mm handgun used in the shooting under a car that was later recovered by police, prosecutors said. The other got into a white Honda Civic and drove away.

Ballistics testing showed a second 9mm handgun was also used in the shooting, but that weapon was not recovered, prosecutors said.

Corona was on parole at the time of the shooting after he was released from prison in December after serving time for two separate robbery convictions in 2015, state records show.

He has been charged with two counts of first-degree murder.

Defense attorney Josh Kutnick told Judge Barbara Dawkins that Corona could have been running to safety from the park when the violence broke and questioned the witness’ identification, noting they had been too far away to see the shooter’s face.

Corona lives with his girlfriend and works as a welder, Kutnick added.

Dawkins ordered Corona held without bail and set his next hearing for May 31. 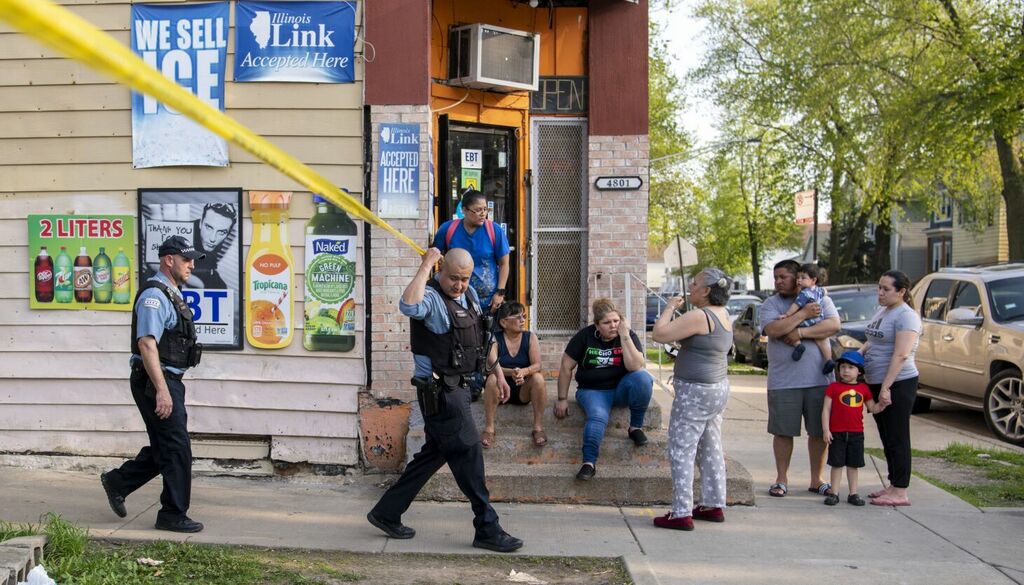 Chicago’s top cop blames mass shooting in Back of Yards on convicted felon recently released on gun charge despite record
A teen was killed and four others were wounded in the Back of the Yards shooting. Hours later, six people…

Chicago Sun-Times
One subscription that gives you access to news from hundreds of sites
DNA taken 15 years ago leads to arrest of man in rape of woman at hotel, prosecutors say

Frank James is charged with federal crimes for an attack on a crowded subway train last month.