All In: An Autobiography by Billie Jean King review – a true gamechanger 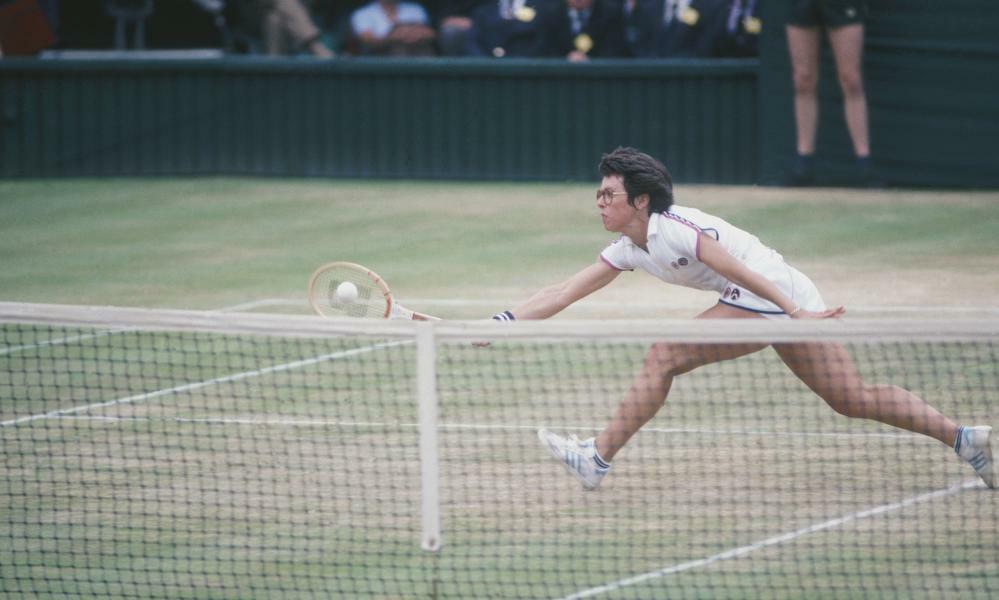 In the first tennis tournament Billie Jean Moffitt played, aged 10, the organiser refused to include her in a girls’ group photograph because she wore shorts rather than a skirt. Nineteen years later, when she defeated former Wimbledon champion Bobby Riggs in the famous “Battle of the Sexes” match, she remembered that childhood slight as the first moment she had felt the need to “change the game around”. “Now,” she said, having won $100,000 by beating Riggs in straight sets, “it’s here.” In fact, as this memoir of a long life of success and struggle shows, in 1973 when she beat Riggs and put the women’s professional tour in the headlines, change was only just beginning.

Tennis, with its ingrained formalities, and its potential for setting individual single-mindedness against tradition, has always been a good arena for sporting revolutionaries. In the 1970s, Billie Jean King – as she became after her marriage to her tennis promoter husband, Larry, in 1965 – fought first for parity between the men’s and women’s games, and then became a vocal champion of gay rights as the first openly lesbian professional sportswoman.

King approached both of those causes in the same spirit in which she played the game, always looking to attack rather than defend, more likely to charge the net than play things safe. Now 77, she looks back on those challenges in this thoughtful, soul-searching book with a sense that her life has been a series of short sprints rather than a marathon. Each time she achieved one goal, she took a breather and refocused on the next.

She describes the ultimate destination as freedom, the liberty to be true to herself (a quality nicely captured in Elton John’s tribute song to her, Philadelphia Freedom). As a bespectacled child in Long Beach, California, she would look at the map of the world on her classroom wall and imagine all the places she would go. “Even then, I felt that borders had no hold on me,” she writes, both of her desire to travel and her sense that she would live her life to her own rules. At 10, she also announced to her mother: “I want to be the No 1 tennis player in the world!” Her mother, a Tupperware-partying American housewife replied: “OK, dear.”

King’s mum and dad did not fit the despotic caricature of subsequent tennis parents – their great gift to her, she suggests, was the fact that they encouraged her and her brother Randy’s sporting ambitions equally (he became a Major League Baseball player). This at a time when 50,000 young American men attended college on sports scholarships – and fewer than 50 women.

Modern women’s sports as we know them essentially started when nine players led by King and a sharp businesswoman named Gladys Heldman, publisher of World Tennis magazine, broke away from the amateur tour to create the first women’s pro tennis circuit, “ignoring,” as she says, “the sneers of a male-run tennis establishment that told us no one would pay to see us play, and then repeatedly threatened us with suspensions when it looked as if folks might”.

Having established this space for superstar female players, King’s great rivalry with Margaret Court gave way to those with the younger prodigies Chris Evert and Martina Navratilova – matches recalled with great intensity. King details her off-court battles with a similar “all in” honestly. In the 1970s, her questions about her sexuality were resolved for her when she embarked on an affair with her former hairdresser and “travelling companion” Marilyn Barnett. But when she talked to friends about the idea of coming out, she was told that the backlash and negativity “won’t just hurt the tour – we won’t have a tour”.

That decision was made for her, eventually, by Barnett who, after their affair ended, threatened to publish love letters King had sent her unless the player gave her the Malibu house in which she had long been living rent free, and so-called “galimony” for the rest of her life. Barnett brought a lawsuit against King, and the publicity led to the National Enquirer at one point offering tens of thousands of dollars to any player who would “lift the lid” on so-called “rampant lesbianism” in the women’s game. Despite the fact she won the case and Barnett was evicted from her Malibu home, all of King’s sponsors abandoned her without a second thought. The stress exacerbated the eating disorders that had dogged King throughout her career (and saw her hospitalised into her 50s). She was, though, as she writes, free for the first time to make her voice heard, to become a true “gamechanger”, as Barack Obama characterised her when she was awarded the presidential medal.

The 39 grand slam titles she won in her 22-year professional career are far from inconsequential achievements to her, of course, but you believe her when she suggests that her broader successes in extending women’s and gay rights are an even greater source of pride. The differences between then and now are stark – and she can measure the changes she was so instrumental in helping to effect: “When I was outed as gay in 1981, corporate sponsors deserted me overnight,” she writes. “Today I laugh and think: ‘Wait – I get paid now to be a lesbian.’”

• All In: An Autobiography by Billie Jean King is published by Viking (£20). To support the Guardian and Observer order your copy at guardianbookshop.com. Delivery charges may apply