All geared up for Ganesh festival 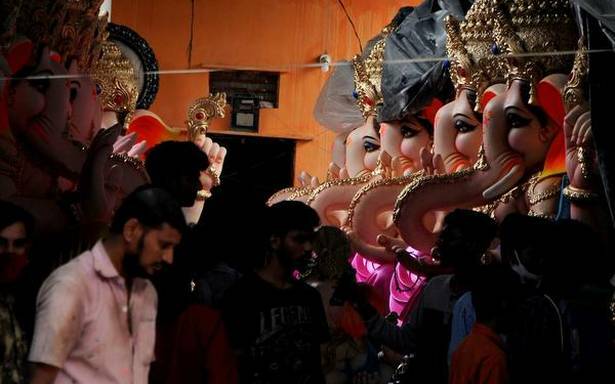 After a gloomy 2020, there is a broad grin on the faces of shopkeepers selling Ganesh idols in the Dhoolpet area of the city. Young men from different parts of the city talk animatedly among themselves as they try to match their budgets with the prices of Ganesh idols. Transport vehicle owners drive a hard bargain. There are drummers waiting to be hired. There are no masks to be seen and the COVID-19 pandemic appears to be a thing of the past as the city looks forward to the 10-day Ganesh festival.

“All the idols made at our workshop have been sold. They have bought the last,” says Vijay Singh as he folds a bundle of currency notes and locks it in the dicky of his two-wheeler. He reveals a secret. “Last year, there were mixed messages about whether people will be allowed to install idols. We made idols that remained unsold, so this year we are painting and selling them. The vaccine has changed the business,” he says. A row of 10-foot high unpainted idols stands parked outside.

The 12-foot idol, the last among the 35 idols, is snagged by the Ambedkar Nagar Ganesh Committee from Ameerpet. “We bought this for ₹29,000. Last year, there was a ban. In 2019, our committee installed a 16-foot idol we bought for ₹42,000,” informs G. Ganesh, the organiser. Another idol seller Sunil Singh has a small notice stuck to the taller idols — ‘Booked’.

While the taller idols have been sold out, the small idols under 10 feet are still available as apartment complexes are still wary about celebrating the festival in a big way. “We plan to keep Lord Ganesha idol (2 feet) in the clubhouse for the first five days of the festival with no invite to anybody. We request residents not to gather in the clubhouse or any area for any kind of celebration,” is the message sent out by an upscale housing complex in Nanakramguda area.

“We are installing a small clay idol but there will be no cultural events or prasad distribution,” says the secretary of another apartment complex in Hyderguda.

While the sale of big Ganesh idols might have brought cheer to sellers, only time will tell if the harsh economic impact on festivities is really behind us.