Salman Rushdie has had a price on his head for 33 years. He is a writer who has lived with the fear of being killed for his words. Whatever other opinion one might have about Rushdie and his skills as a novelist or his public persona, this much is true: He has understood what it means to be targeted and hated—burned in effigy—forced to hide and, even in recent years, to continue to look over his shoulder. All because he wrote a book.

And so it came as a shock, but maybe not as a surprise, that Rushdie was attacked this morning onstage, in Chautauqua, New York, of all places. He was about to speak to an audience at the Chautauqua Institution, a cottage community that was founded in the late 19th century as a place for religious learning, and that has since become an oasis of education and discussion every summer. That it was here that Rushdie was struck repeatedly with a knife is a terrible irony.

We still don’t know the attacker’s motive, just that eyewitnesses were startled by how fast it happened and grateful for how quickly the attacker was detained. Of course one immediately wonders whether this act of violence was carried out by someone who intended to fulfill the fatwa issued in 1989 after furious reaction to his novel Satanic Verses—a call never truly rescinded—or whether this person had some other twisted explanation for their actions. But we know the results. Rushdie was still in surgery as of this evening, The New York Times reported. And regardless of why the violence took place, one message was unambiguous precisely because the target was a writer: Free expression is worthy of a death sentence. This alone pushes us into dangerous territory, because now it is something that has happened; something once considered a worst-case scenario is now an actuality—one that could happen again.

[Read: In hindsight, the war on terror began with Salman Rushdie]

Maybe the most jolting immediate reaction was from PEN America: “We can think of no comparable incident of a public violent attack on a literary writer on American soil.” And it’s true: What other societies have given us murdered authors? Stalin’s Soviet Union is the one that comes quickest to my mind. Osip Mandelstam dying in a prison camp. Isaac Babel executed. The Yiddish poets and writers whom the dictator ordered shot in the basement of the Lubyanka prison. Rushdie has not been targeted by his own state, of course—after living in hiding for years in London, he has lived openly in New York for the past two decades. Again, we still don’t know why he was singled out for this brutality. But just as the mind recoils at the sight of a single book burned, the spilled blood of an author inspires revulsion.

Rushdie himself has become something of an absolutist on the freedom of expression. In a speech at Emory University in 2015, he said that “limiting freedom of expression is not just censorship, it’s an assault on human nature.” He rejected the relativistic notion that “freedom of expression is culturally specific” and that certain cultures can simply “reserve the right to reject it.” To him, the right to speak your mind, about anything, is universal, and he warns of the danger that accompanies the fact that it has ceased to be considered as such. In some ways, he never stopped fighting the debate that first ignited around the fatwa, with some defending him unreservedly and others arguing that perhaps his perceived insult of Islam was a mistake and a needless provocation on his part.

This morning’s violence cuts through this debate, silences it—as violence often does. Writers represent the part of our culture that engages with humanity through ideas, whose passion is expressed through sentences and paragraphs and pages. It’s a realm we should not just preserve but defend. May it never be eroded by the brute force of an arm wielding a knife. We should all hope that Rushdie survives. And not just because a writer should never have to give his life for what he has written. But because we need him to keep reminding us of the worst of what can happen—the violence that can happen—to someone who has used nothing more than his words. 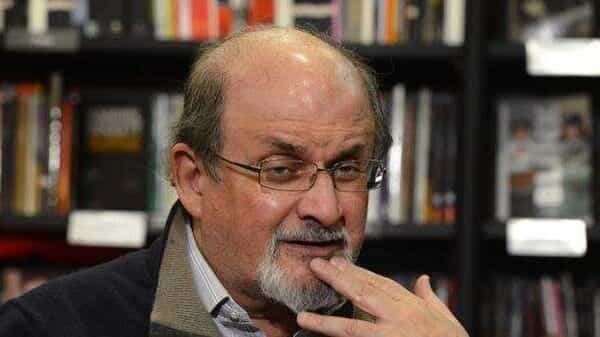 Livemint
From analysis to the latest developments in health, read the most diverse news in one place.
Who is Salman Rushdie? Author whose book The Satanic Verses made him a target

The Indian-born writer has been stabbed in New York, and it’s not his first brush with violence

The Guardian - UK
Salman Rushdie attacked: Here's all you need to know about the fatwa against him and the controversy

In a shocking turn of events, former Booker Prize-winning author Salman Rushdie was attacked on stage at the Chautauqua Institution…

The Times of India
Salman Rushdie: ‘My book being put in jail’

The Hindu
My next book is an Indian novel: When Salman Rushdie revealed about his new book 'Victory City'

Roughly a year ago, in an exclusive interview with TOI’s Vinita Dawra Nangia at the Times Literature Festival 2021, former…

The Times of India
One place to find news on any topic, from hundreds of sites.
What is a fatwa? Salman Rushdie’s backstory moves center stage after attack
After Salman Rushdie was attacked as he began a lecture Friday in western New York, it was a potent reminder…