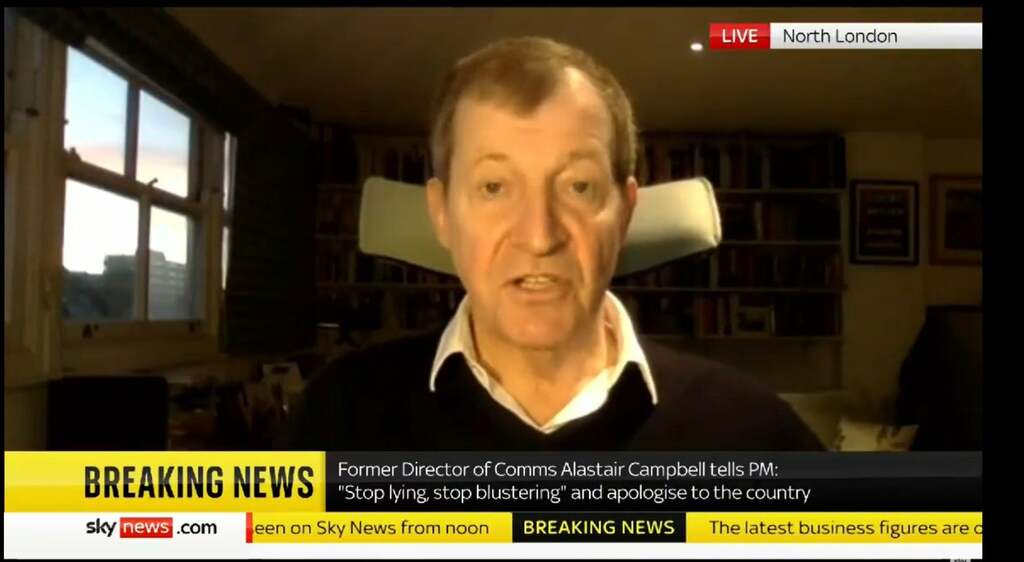 Never one to mince his words, Alistair Campbell has slammed the government over their reported handling of allegations that Boris Johnson attended a lockdown breaching party.

Speaking about the news that Boris Johnson’s principal private secretary Martin Reynolds sent an email to more than 100 employees inviting them to a garden party in May 2020 at a time in which people could only meet one on one outside, and reports that the PM himself attended the soiree, Tony Blair’s former director of communications slammed the cabinet for failing to deal with it and called them “an utterly spineless craven bunch”.

“This isn’t just about Boris Johnson. These Conservatives have now been in power for over a decade and if it’s true... that yesterday at the cabinet meeting... that this wasn’t even raised by a single member of the cabinet, then they really are an utterly spineless craven bunch.

Alastair Campbell - If it's true that #PartyGate wasn't even raised by a single member of the cabinet, yesterday, then they really are an utterly spineless, craven bunch, as this is affecting the good governance of the country.#KayBurley pic.twitter.com/NHH6nMLXQt

“This is something that is affecting the good governance of the country and that is something for the entire cabinet to address.”

Reynold’s party has been dominating the news cycle this week as it provides clear evidence that Downing Street hosted an indisputable social gathering during lockdown for the first time, with the government batting off other reports of parties by suggesting they were work meetings or refusing to accept or deny that they happened at all.

The email said: “Hi all, after what has been an incredibly busy period it would be nice to make the most of the lovely weather and have some socially distanced drinks in the No10 garden this evening.

ITV News claim around 40 people showed up and it is even alleged that the PM and his wife Carrie Johnson were among attendees but when Johnson was asked on Monday if he and his wife attended the party on 20 May, he replied: “All that, as you know, is the subject of a proper investigation by Sue Gray” while Downing Street also told ITV News they would not comment on the story due to the Sue Gray inquiry.

If it is determined that Johnson did attend the party, many MPs have said this would make his position untenable.

And if Johnson is about to leave - we doubt he will invite Campbell to do a speech at his leaving do.