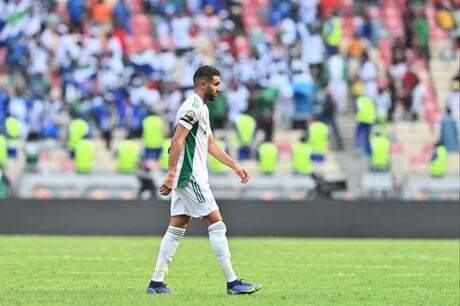 Equatorial Guinea are next up for Algeria this afternoon as the defending champions hope to get their ignite Africa Cup of Nations campaign.

Algeria lifted the AFCON trophy in Egypt three years ago and are among the favourites to repeat that success in Cameroon this time around.

However, they were held to a frustrating goalless draw by Sierra Leone in their opening game, though that result did see their unbeaten streak extend to 35 games, within two of Italy’s world record.

Equatorial Guinea, meanwhile, were beaten 1-0 by Ivory Coast but showed enough to suggest Algeria could be in for another tricky assignment.

Algeria vs Equatorial Guinea is scheduled for an 7pm GMT kick-off on Sunday, January 16, 2022.

Japoma Stadium in Douala, Cameroon will host the match.

Where to watch Algeria vs Equatorial Guinea

TV channel: The match will be televised on Sky Sports Mix.

Live stream: Sky Sports subscribers will be able to watch the match online via the website or Sky Go app.

Live blog: You can follow along with the match on Standard Sport’s live blog.

Djamel Belmadi could make several changes to his side after their disappointing display against Sierra Leone.

AC Milan midfielder Ismael Bennacer could return after missing the opener through suspension, while West Ham’s Said Benrahma is another option, though he missed an excellent chance after coming off the bench.

With a heavyweight clash against Ivory Coast to come in their final group game, Algeria can ill-afford any further slip ups and having had a game to warm into the tournament, will be expecting a miuch-improved display.

This will be the first competitive meeting between the teams.