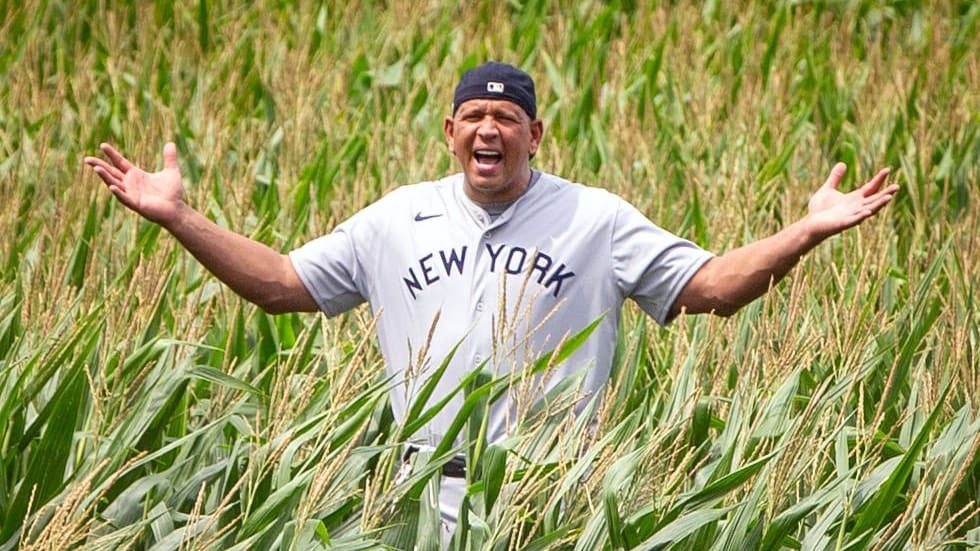 Is it time for him to go?

Here are four words no baseball fan ever wants to hear: The game’s on ESPN.

MLB’s do-or-die wild-card playoffs should be the most exciting games of the year, but they aren’t when Matt Vasgersian and Alex Rodriguez are on the call. The pair (accompanied by reporter Buster Olney) are a chore to listen to on Sunday Night Baseball during the regular season. Those broadcasts feel like a baseball talk show competing with the game being played on the field, but the lack of focus on the game itself isn’t the fault of the guys in the booth. (It’s a production decision made by the higher-ups at ESPN.) What really makes those games unbearable is A-Rod’s uncanny ability to repeatedly say some of the weirdest things imaginable.

Whether he’s talking about “even leads versus odd leads,” not scoring insurance runs to let your struggling closer prove himself or slipping into Shark Tank mode to refer to a team’s rebuild as a “leveraged buyout,” you can always count on A-Rod to say something that will make your head spin. That’s why, even though I’m a Yankees fan and they play plenty of Sunday night games every year, I rarely watch. It’s also why I was grateful that ESPN had the Statcast-focused alternate broadcast with Jason Benetti, Eduardo Pérez and Mike Petriello on ESPN2 on Tuesday night. Anybody who did listen to the primary broadcast on ESPN was treated to some real drivel from A-Rod.

“Weird time in the game to ask this” basically sums up the experience of watching ESPN’s top baseball crew. For instance, here’s what A-Rod was talking about with two outs in the ninth.

Not only is that the worst time to start making predictions about next year, he also couldn’t even get his facts straight.

Reading all the reactions to Rodriguez’s night made me feel like I made the right decision in opting for the Statcast version of the game. Although that broadcast certainly wasn’t perfect (the amount of information being thrown at you can be a bit overwhelming), at least it made me feel smarter, which is the opposite of how it feels to watch A-Rod and Vasgersian.

The problem with A-Rod is that he’s a baseball genius who is fully capable of great analysis—New York Post sports media columnist Andrew Marchand shouted out his discussion of the questionable decision to send Aaron Judge around third in the sixth—but a three- or four-hour game gives him too much time to fill with meaningless crap. The whole reason he’s in the ESPN booth is that he was fantastic as a studio analyst for Fox. He was even nominated for an Emmy! But he’s a drag to listen to as a color commentator. Whether the broadcast style is to blame or he’s just not cut out to be an announcer, I don’t know. But something has to change, because those ESPN games are just brutal.

The best of SI

Their loss to the Red Sox showed how far away the Yankees are from another World Series. .. Both sides in the Ben Simmons–Sixers battle appear to be dug in. ... Will Urban Meyer be able to turn things around in Jacksonville? Does he even want to?

Sharks forward Evander Kane is reportedly under investigation for submitting a fake vaccine card. ... A low-level soccer team was knocked out of the Coupe de France because a GPS typo sent them to the wrong town and they got disqualified for being late. ... A soccer player in Brazil was arrested for kicking a referee in the head.

Judge was dead in the water

That might have been it for the longest-tenured Yankee

The Jets and Giants sure aren’t breaking this streak

Archaeologists uncovered a rare example of a 2,700-year-old toilet in Israel. ... Two drunk Brits who sneaked into a water park at 2 a.m. had to be rescued after breaking their legs on a waterslide. ... A man on trial for assault tried to carry out a citizen’s arrest on the judge in the courtroom.

Will the Game of Thrones spinoff be like the first six seasons or the last two?

Email dan.gartland@si.com with any feedback or follow me on Twitter for approximately one half-decent baseball joke per week. Bookmark this page to see previous editions of Hot Clicks and find the newest edition every day. By popular request I’ve made a Spotify playlist of the music featured here. Visit our Extra Mustard page throughout each day for more offbeat sports stories.