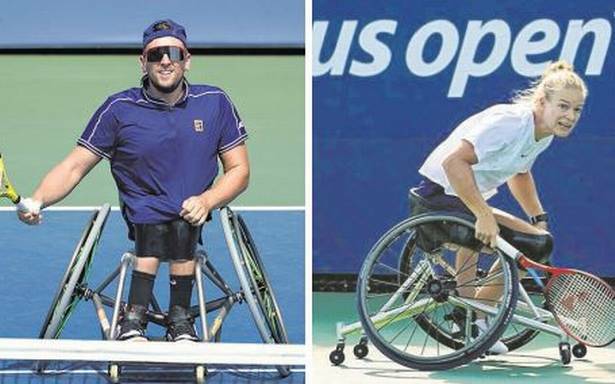 Australia’s Dylan Alcott and Diede de Groot of the Netherlands have a chance at tennis history Novak Djokovic can no longer make.

Unlike Djokovic, the wheelchair stars both won gold medals in Tokyo. Having already won the three Majors this year, they arrived at the U.S. Open in position for the Golden Slam. But, both insist they aren’t thinking about it.

“If I win everything, amazing. If I don’t, the sun will come up tomorrow. I think my girlfriend will still love me, my family won’t disown me, so I’ll be OK. So I want to do it, but I don’t think about it that much,” said Alcott said.

“I think it’s more of a thing that the media and people around me are very busy with,” de Groot said.

The Australian is the No. 1 seed in the eight-man wheelchair quad division, while de Groot is on top of the bracket for the women’s singles tournament.

Their biggest challenge might be fatigue. The Paralympics just ended over the weekend before the players had to make their way to New York.

Steffi Graf in 1988 is the only player to win the four Slams and a gold medal in the same year. A Golden Slam wasn’t even possible for wheelchair players until recently, as Wimbledon didn’t add wheelchair singles until 2016.

Alcott is nearing the end of a stellar sporting career. The 30-year-old quadriplegic won a Paralympic gold medal in basketball in 2008 before switching to tennis.

The 24-year-old de Groot, whose right leg is shorter than her left, already made wheelchair history in 2019 when she became the first women’s player to hold all four Grand Slam singles titles at the same time.