There will be “complete transparency” around Labor’s $15 billion National Reconstruction Fund, which will help to “kickstart” the next Tesla in Australia, Opposition Leader Anthony Albanese has said.

The Labor Leader also slammed the Coalition’s planned $3 billion-plus cut to the public service, announced earlier this week, saying this could lead to the next robodebt.

Mr Albanese was asked how Labor’s flagship industry policy, a $15 billion National Reconstruction Fund, would avoid the politicisation and “rorting” that the Opposition has accused the government of surrounding its $1.5 billion Modern Manufacturing Initiative.

Mr Albanese said the $15 billion fund would be based on the model of the Clean Energy Finance Corporation, which is governed by an independent board, with statutory responsibility for decision-making and a chief executive officer responsible for its day-to-day administration.

“We’ll be completely transparent, and what we’re doing is we’ll establish essentially the model that has worked really effectively with the Clean Energy Finance Corporation. They won’t be political decisions,” Mr Albanese said.

“If you have a business that’s crying out for some support, in order to mitigate the risk, to ensure it can grow and have new industries, then that will be a priority. But they won’t be political decisions.”

This will be in contrast to the government’s industry grants scheme, the Modern Manufacturing Initiative, where Prime Minister Scott Morrison has final sign-off on all grants. This program has rorts “baked-in”, the Opposition has claimed, and has been politicised, with grants rounds timed to be announced during the election campaign.

About $1 billion in manufacturing grants have been committed by the Coalition during the election campaign and in the two months preceding it.

Under the Coalition’s Modern Manufacturing Initiative, Industry Innovation and Science Australia review all applications and provide advice to the Industry Minister, who then recommend projects to the Prime Minister for a final decision.

“What this grant represents is the formal baking-in of the infamous colour-coded spreadsheets – a complete subversion of the Westminster system of ‘ministerial accountability’ and the creation of a new normal where Mr Morrison decides who gets what based solely on his political ambitions,” Senator Kenneally said in July 2021.

Labor has attempted to seek assurance from the government that all department advice and recommendations will be followed in terms of issuing the manufacturing grants.

Labor’s promised $15 billion National Reconstruction Fund will be split into a number of smaller funds with a specific focus. These will include $1 billion for an Advanced Manufacturing Fund, a further $1 billion for critical technologies, and another $1.5 billion for medical manufacturing.

The fund will help to launch the next Tesla from Australia, Mr Albanese said.

“What gave [Tesla] the kickstart was support from the US government, and a government I lead will back Australian businesses to become powerhouses just like Tesla has become a global powerhouse,” he said.

During the National Press Club address, Mr Albanese also slammed the Coalition’s planned $3.3 billion cut to the public service via an increase to the efficiency dividend, saying it could lead to the next robodebt.

“They said they’re going to gut the public service even more. Well you know what that leads to? Robodebt. It doesn’t save money, it costs money. Because you take humans out of human service, and it has devastating consequences for real people. It costs lives, as well as over a billion dollars for taxpayers,” Mr Albanese said. 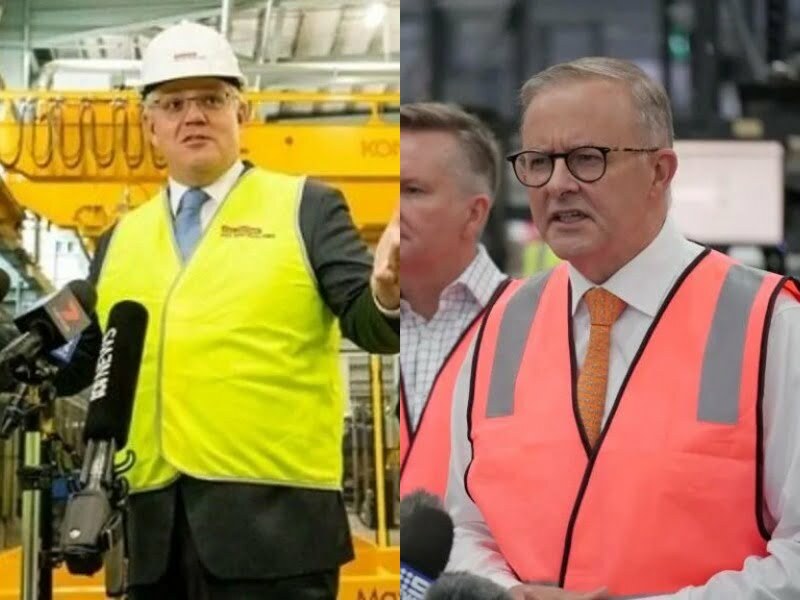