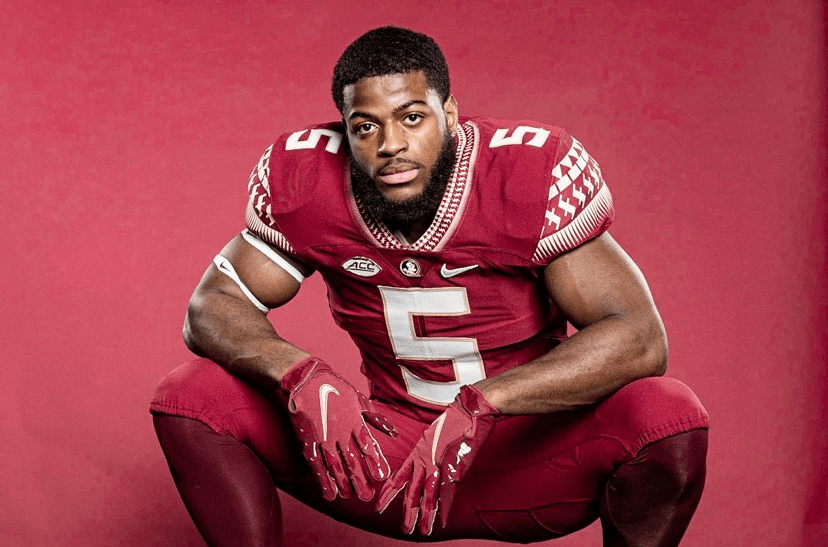 Jared Verse announced his intention to transfer from Albany football to wrap up the month of November.

The first offers to the defensive end came in immediately after, and his ascent towards becoming arguably the most coveted pass rusher in the ever-expanding NCAA transfer portal was rarely in doubt thereafter. Over the following weeks, the options would balloon into the 30s, with a who's who list of college programs heavy on his trail.

USC, Oklahoma, LSU, Utah, Iowa and droves of programs in between jumped in with offers, but there had become somewhat of a southern focus for the home stretch of the transfer decision process, with Tennessee, Florida State, Houston and Miami among those under most consideration.

On Friday, after phoning staffs with gratitude for the bulk of the week, Verse announced his intention to enroll at Florida State later this month. It follows breakout FSU pass rush transfers who served as the brightest spots for Mike Norvell in 2021.

"I am not going to lie; Jermaine Johnson and Keir Thomas were both big factors," Verse said of his decision. "I got to meet and spend time with both of them on my official visit. They were both in the same position as me, where they were transfers that succeeded very early on. The team success was not where the coaches or players wanted it, but they succeeded, especially Jermaine, to a point where he is going to be a projected first-round pick, and Keir is going to be drafted as well.

"It was really nice to see people in the exact same situation this past year having all that success. Obviously, we are different players and things may be different, but it was a nice layout that I got to speak with those guys on my official. "

Verse was as productive or even better than the duo before their move to Tallahassee. He is fresh off of 2021 CAA Defensive Rookie of the Year status after registering 52 total tackles, 11.5 tackles for loss, and 9.5 sacks at the FCS level this fall.

The coach that helped bring along the pair will be in position to do so for the newest Seminole, too, in long-time assistant O'Dell Haggins. That track record of putting guys in the league over a long stretch played a part in Verse's pick.

"Obviously, I am a different player than every other player they have had," he said. "Not because I am special or anything, but just because every player is a bit different. The importance of him being able to have all of these guys guy to the NFL and see me and help because I am different and need to develop is very important."

When Verse entered the "unknown" of the transfer portal world on November 30th, he was unsure what to expect. Shortly after waking up the following morning, he had over 30 missed calls, 60-plus missed texts, and too-many social media notifications to count. He knew then his world was about to flip upside down.

Plans to visit Houston, Florida State, and Tennessee materialized thereafter. He wanted to squeeze in more, but there simply was not enough time. Verse wanted to ensure he made a decision and was at his next home by the start of the Spring semester this month, but even schools he did not make it to see in person were not slowing their pursuit of the, and new offers kept coming in.

"The process was stressful from the get-go," Verse said of the relief of seeing it coming to an end. "I am not going to lie. My mom has to get a lot of credit. She took the reins and took a lot of calls for me, and handled a lot of it to make it a lot easier for me. She took a lot of weight off of my shoulders and put it on hers. My father also, I cannot take any credit away from him either.

"It was hard to find cons with these colleges. They are all so good at showing the pros. All of these schools have great records and history that speak for themselves, but this next season is what is the most important for me. I have to care about what the future looks like. My friend, who is very close to me, gave me the best advice I heard. 'Be selfish in this process and with your choice." So, I started being selfish with a pros and cons list. If there was a little thing that might have been a con, I put it down in a different color. I just worked through this by making it a decision that was best for me."

Now he'll help replace the 19 combined sacks Johnson and Thomas produced at Florida State in 2021. The redshirt freshman, listed at 6'4", 247 pounds by UAlbany, intends to spend time in Tallahassee as a two-way defender despite the pass rusher label.

"First and second down is the most important," Verse said. "You have to be able to stop the run in whatever league you are in, then third down is where the money is made. Going to a school where I would have the opportunity to get sacks because teams pass more was never a big emphasis for me. It is a nice bonus, but at the end of the day, TFLs are important, too.

"Obviously, coaches want a pass rusher, but if you can get TFLs and get in the backfield and be involved on every play, I believe NFL teams are going to see a lot more value in that."

The Pennsylvania native, who played three prep sports at Columbia Central High School, will have multiple seasons of eligibility remaining upon his arrival in Tallahassee. He says there won't be a teammate pushing harder for change than he will during the work week as well as on game day.

"There were games where we were losing late in the fourth, and we just wouldn't give up," Verse said. "That is just one thing I have learned. I don't give up. I am big, fast and strong, and that is all cool, but so is everyone else at the FBS level. It is the work ethic and the non-stop will to win that I am bringing to Florida State."

Matt Ray of VR2 on SI contributed to this report.