Albanese’s challenge: deliver for the progressives and the silent, excluded voter

Well, as Albo gave the victory speech on stage, tired but vindicated, one’s dominant thought was “Hmmm”. I mean, first it was “YES YES YES”, then “Don’t say sweetest victory of all”, then “Hmmm, what exactly happened?”

Your correspondent’s view of the nation, developing throughout the campaign, had been that the most exuberant and energetic forces in the country were developing among the knowledge class and the broader liberal middle classes.

These were people angered by climate change inaction, corruption, lying and rorting, as well as the lack of any sense of a future plan, with no place for them in the Liberals, no sense of connection to a post-Whitlamite Labor, and the Greens too left on multiple fronts. The new social self-confidence of these sub-classes, the changes made by social media, a lot of organising by the movement springing from Indi, supercharged by money from Climate 200, had made a new supercharged force whose networked form mimicked the work/life arrangements they were accustomed to, floated on their discursive skills and abilities, in what became a virtuous circle.

The more such people heard each other, the more the movement recruited itself. This worked in both liberal urban areas and in country places where volunteer community networks remained strong.

Against this it seemed to me was, at the other end, about 10% of the populace oriented to UAP, One Nation, etc — certain types of Anglo “ordinary” middle class, together with some of the excluded and other blocs. They grooved on the “concrete” stories these parties told, of vaccine conspiracies connecting to larger conspiracies about thwarted lives and lost culture.

But in between these two vocal groups, there was about a quarter to a third of the electorate who had gone silent rather than quiet. Their sense of atomisation and disengagement was now total; they did not even identify with the self-declared populists who by the very fact of being within the system had become part of it, not their representatives within it.

Once they might have found their place within a rank-and-file. Now, often with lower-level educational skills, isolation and disconnection, they found that the only way of preserving their identity and sense of self — among all that blah blah blah, all that discourse — was to withdraw so entirely that their feelings were difficult to gauge by any method whatsoever.

My guess was that the energy propelling Labor forward would meet this force, which tilted strongly towards the Coalition — though with no admiration for Scott Morrison — and would reduce Labor’s forward march to a majority, stalling it in the no-one’s land of a hung parliament.

So, uh, *checks notes*. This is a complex result, with that surge of progressivism occurring and giving a sense of a landslide, delivering Labor several seats in these prog heartlands, and some swings that came very close to delivering it another five or six. Yet Labor’s result will sit on the border of majority government, with between 75 and 78 seats.

Though a Labor majority looks more likely than not, it’s a bare one, without much wiggle room in the months and years ahead. The progressive surge was even more so in the areas won, or almost won, by the Greens — Ryan and Griffith, a maybe in Macnamara, close in Richmond. It delivered exactly what it promised in half a dozen teal seats. There was also the “rust” surge — I’m going to keep calling rural teals rusts until it takes — who hollowed out National safe majorities across the land.

But Labor couldn’t really surge in some of the “middle-middle” seats — places where UAP and One Nation have no more than their 8% or so hard-right aggregate, but where a degree of resistance to the new progressive package is expressed by refusal. Thus Labor could not take Longman in the Brisbane exurbs, and has only a small chance of getting Casey in Melbourne’s outer north-east.

In Tasmania, the last region where there’s a thorough working-class dominance of political culture, it could not take Bass or Braddon (even with Lambie preferences in the latter), and has gone backwards in Lyons. It’s true the Coalition did not get the great revolt in these ‘burban lands it was hoping for.

So that suggests to me that while the, or a, great progressive moment has occurred in Australian politics and which represents the broadening of the “progressive class”, it was not the victory of a grand coalition.

Power and ideological hegemony have shifted decisively, and progressives should be bold in asserting their agenda. But in the places where people still feel excluded, unserved, unable to connect with power or the means to get it, where there’s no point talking about coming up from public housing because there is none, there remains a resistance to the narrative and the whole progressive worldview.

Anthony Albanese, if he is any sort of Labor leader, will need to find a way not only to deliver both the progressive vision and for the needs of the silent and excluded — he and Labor will need to honour their view of what the world is, and what matters, to build and consolidate government in this term and a triumph in the next. 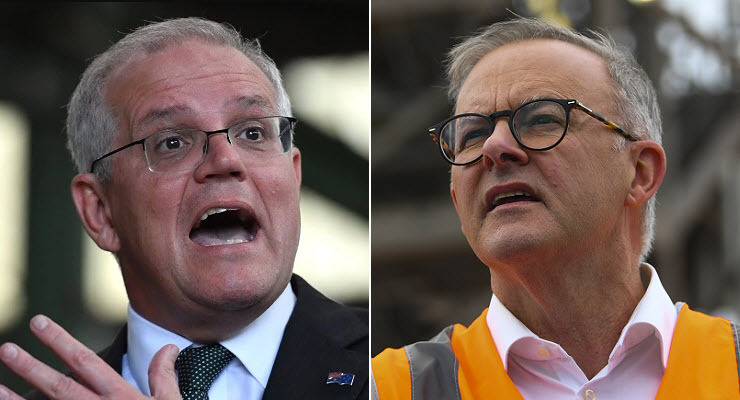 Labor-lite v crony capitalism — what a choice. But here are my tips for the election result anyway
Labor has done its best. Will it be enough? Guy Rundle predicts the outcome of Saturday night.

Crikey
One subscription that gives you access to news from hundreds of sites
Australian election 2022: Anthony Albanese ‘humbled’ to be next PM as voters abandon Coalition

The Guardian - AU
How a Labor ‘win’ unfolded

Labor will form government in some form, but a potential missed opportunity to claim majority will be its own fault.…