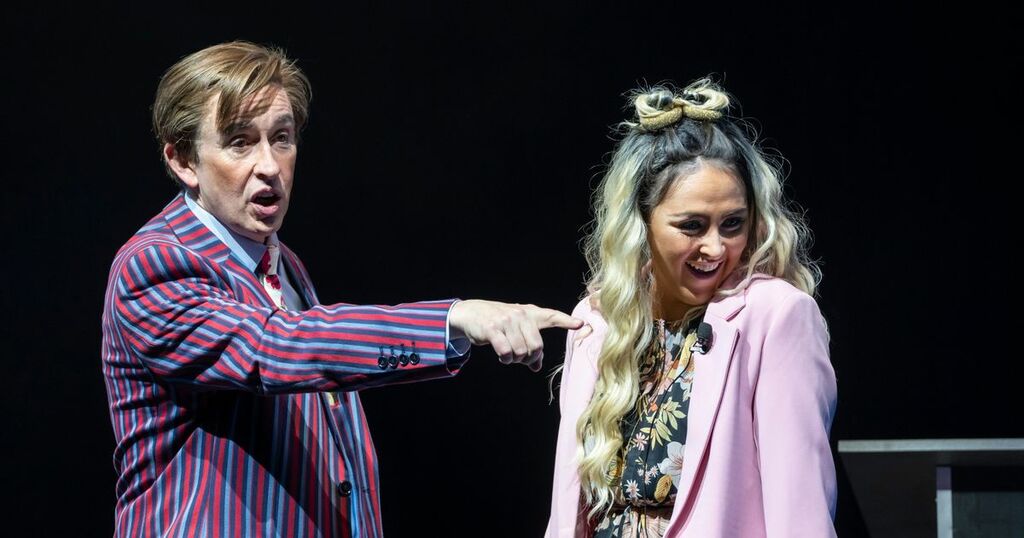 Actor and comedian Steve Coogan claims there are next to no skeletons left in his closet. So we sent the…

Daily Mirror
Lolly Adefope’s year in TV: ‘We made a sex tape in Shrill – some of the noises I made were unacceptable’

The Ghosts star on loving Real Housewives, why Vigil made her cry, and what made The White Lotus perfect

He’s back and better than ever. Steve Coogan brought the iconic Alan Partridge to life in Liverpool last night and I never wanted it to end.

After several failed TV shows and a family life that didn’t quite work out, Alan’s back and trying his hand at being a life coach. Half TED Talk, half musical theatre, Stratagem takes everything we know and love about Alan Partridge and puts it front and centre.

The show, written by Steve Coogan, Neil Gibbons and Rob Gibbons, sees Alan donning a head-mic and wearing an outfit inspired by “what Christ would wear if he was Steve Jobs”. The stage design is simple and effective, with a huge catwalk-style bridge with stairs on either side and a huge screen which becomes integral to the show - it was inspired by a women’s prison, according to Alan.

READ MORE: Places where you can watch the FA Cup final in Liverpool

He appears alongside an ensemble of backing dancers and makes good use of them as he tries to explain just what Stratagem is - a strategy that will turn you into a gem, we later discover. Stratagem is essentially Alan’s roundabout way of teaching us how to improve our lives post-Covid.

According to Alan, who appears on stage - and sometimes in the audience - during lockdown his mind, “like freshly milked Rice Krispies”, went “snap, crackle and pop”. Now, he’s here to tell us how he got through it and how we can make similar changes to our lives.

Alan takes a look back at his childhood, where he was hounded by bullies, before using a time machine - ah, the magic of theatre - to head into the future to meet his 105-year-old self. They’re both quite bizarre meetings, but infused with jokes you can’t help but belly laugh at.

Between specific segments, Alan’s one-liners carry the show well, with jokes about Eamon Holmes, Nick Clegg and Jeremy Clarkson worked in so seamlessly you’d think he’d come up with them there and then. Tailored for Liverpool, there’s even a joke about Oasis only being a Beatles cover band.

There are also a number of guests throughout the show, from one of Alan’s former patients, who he helped using Stratagem, to the much-loved - and Alan’s long-suffering assistant - Lynn Benfield. While she only appears on screen, Lynn’s arrival was welcomed with huge applause and wolf whistles.

Another impressive appearance comes from Martin Brennan, who fans will remember from his appearance on This Time with Alan Partridge back in 2019. Hilarity soon ensues and I couldn’t quite stop myself from laughing too loudly.

He's always been an all rounder and this show proved it, with singing, dancing, comedy and even some very over the top theatrical performance thrown in, Alan Partridge's Stratagem has something for everyone.

The show closes out with Alan and his ensemble singing and dancing to 80s power ballads - and what a way to go. I didn’t want the night to end, but if I know anything about Alan Partridge it's that he’ll be back with something new and exciting soon.

Alan Partridge's Stratagem tour continues on with dates across the country until the start of June. For more information, click here.

Alan PartridgeSteve Coogan
Sign up to read this article

Actor and comedian Steve Coogan claims there are next to no skeletons left in his closet. So we sent the…

Daily Mirror
Lolly Adefope’s year in TV: ‘We made a sex tape in Shrill – some of the noises I made were unacceptable’

The Ghosts star on loving Real Housewives, why Vigil made her cry, and what made The White Lotus perfect