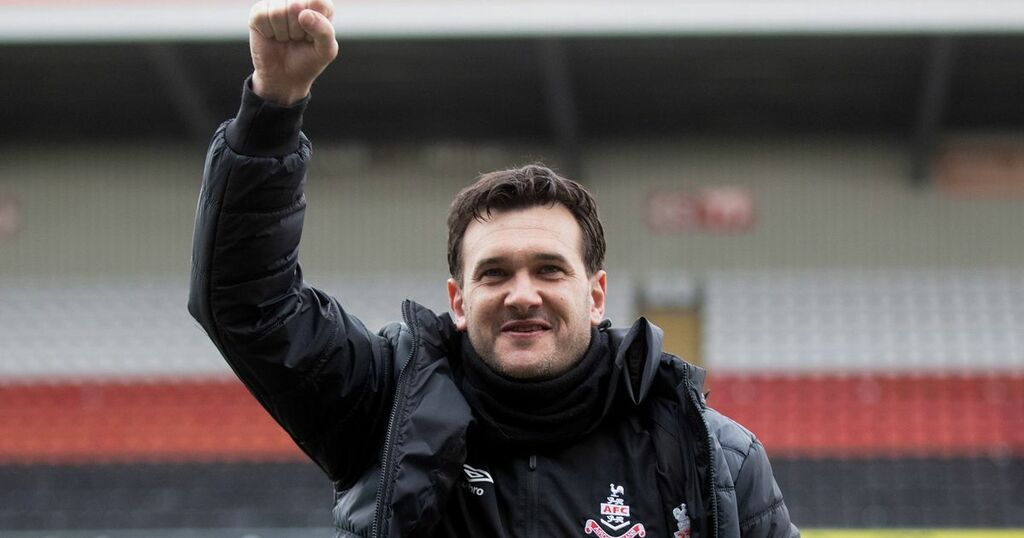 Airdrie's Montrose comeback was ridiculous but we won't get away with that again at Queen's Park, says Ian Murray
The Diamonds gaffer warns his side they'll need to show improvement to sink the Spiders in the Championship play-off final

The Diamonds boss is satisfied with a draw in their opening 90 minutes of the Championship play-off final.

It was the first leg of two games that will decide what division Airdrie played in next season.

It will be a proud week for Airdrie striker Callum Smith and his family as he and Queen's Park star brother Connor battle it out in the Championship play-off final over the next few days.

But the elder Smith by two years, Callum, expects if it is he who emerges victorious across the two ties, competitive Connor will

The pair are likely to start for their respective sides and 22-year-old Callum told Lanarkshire Live Sport : "It's going to be a good occasion for the family.

"It will be disappointing for the one that doesn't go up obviously but we'll be proud no matter what.

"It's going to be a good day out for the family and we are just looking forward to it.

"I'm hoping he's going to be on the losing side, but I know what he's like.

"He's a bad loser so I can see a few wee arguements coming if that does happen.

"They've always been close games between us. The last game against him we won [2-0 to Airdrie at New Broomfield], but they are always close games.

"Connor is a good player and so is the whole of the Queen's Park team so we know it is going to be a tough couple of games coming up."

The first leg takes place at Firhill, which the Spiders - who dumped Dunfermline in the semi-finals last week - have shared with Partick Thistle this season.

That groundshare though has been to both sides' detriment, with the bobbly cut-up surface making goals at home hard to come by.

The Spiders have scored just five goals in their last six home games and you have to go back to October for the last time the Jags, who have missed out on Premiership promotion this season, scored more than one goal at home.

Smith admits Airdrie's free-flowing passing game will need to go out of the window for the first leg, but it's a challenge they are aware of having drawn both games at Firhill earlier this season (0-0 and 1-1).

"Firhill is not the best pitch, we know that because we've been there a few times this season," said Smith, who missed a glaring chance in the 1-1 draw in January after the ball bobbled in front of goal.

"It is starting to look a wee bit better than the last time when it was just mud.

"It looks like there's a wee bit of grass now.

"We'll just need to work round it. We will need to change our game a wee bit.

"It's going to be different for us away because we'll look to get the ball down a bit more when we are at home, but hopefully we can come out on top."

Airdrie go into the clash off the back of the most dramatic of games last weekend.

Trailing Montrose 1-0 after the first leg of the semi-finals, the Diamonds pulled off an epic revival as Callum netted a second-half hat-trick on the way to a 6-5 aggregate win after extra-time.

He knows Airdrie they need to better defensively but insists they will always believe in themselves, regardless of how things stand in the tie after tonight.

He added: "We do need to tighten up at the back. Conceding five goals in our last two games isn't great, but we knew it was always going to be a tough game against Montrose.

"The fact we've scored six goals against them is very good because they've got a good record defensively this season.

"If we tighten up at the back we've got a good chance of getting through this final.

"There's a real togetherness in the squad. We've got a good changing room and we always believe we've got goals in the team.

"It would be massive to go up. That's what I came back here to do. I saw how strong the squad was looking at the start of the season and that's why I wanted to come back."

The second leg of the clash will be played on Sunday at New Broomfield, kick-off 1.10pm.

Airdrie's Montrose comeback was ridiculous but we won't get away with that again at Queen's Park, says Ian Murray
The Diamonds gaffer warns his side they'll need to show improvement to sink the Spiders in the Championship play-off final

The Diamonds boss is satisfied with a draw in their opening 90 minutes of the Championship play-off final.

It was the first leg of two games that will decide what division Airdrie played in next season.