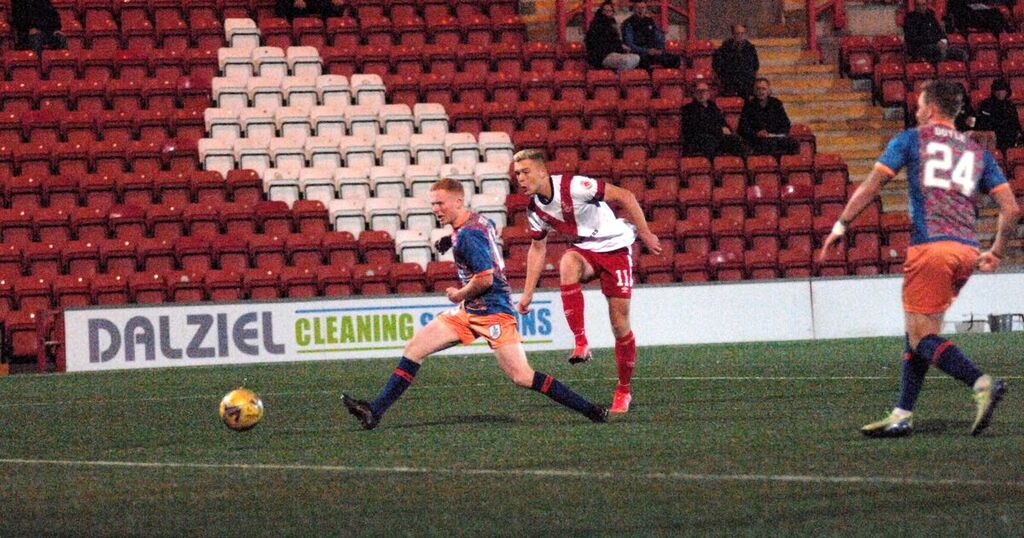 Ian Murray hopes Callum Smith’s first goal since his return to Airdrie will spark a scoring spree that can boost their season.

The 21-year-old joined the Diamonds in August on a permanent transfer from Championship side Hamilton Accies and he bagged the maiden strike of his second spell at the club in Friday night’s SPFL Trust defeat to Queen’s Park on penalties.

Smith rifled home the opener against Queen’s Park before Grant Gillespie netted a late equaliser from the penalty spot to force the match straight to a shootout, which the Spiders won 5-4.

The Diamonds were back in action after the squad was decimated by Covid and Smith was returning after a spell off to enjoy becoming a father for the first time.

With most of their Covid worries behind them and Smith’s baby boy Ollie arriving safely into the world, Murray hopes his striker hits the goals trail as they return to League One action against Queen’s Park this weekend.

The Airdrie gaffer said: “Callum did remarkably well when he came here on loan a couple of seasons ago and since he’s come back in it’s taken him a week or two to get back up to speed.

“You add in his newborn as well, it’s been difficult.

“It’s not always easy when you leave a club.

“It’s a wee knock to your confidence, but Callum is a great player with a great attitude and he’s good to have around the dressing room.

“We wouldn’t have signed him if we didn’t rate him.

“He works so hard in games, regardless of if he is scoring, so he’s a real work horse.

“I’ve got full belief in him and I’m delighted for him to get his goal.

“He took it really well and hopefully that gives him a bit of confidence going forward to get more for us this season.”

Friday night’s cup exit at the second round stage was a sore one for Murray after substitute Scott Walker gave a way a late penalty, just as the Diamonds looked to be heading for the next round.

Although he knows his squad is recovering from the Covid crisis, he still expects better from his players.

He added: “We’ve had a really tough two or three weeks and we are not ignorant to that fact, but when it comes to the crunch players need to be ready.

“Ultimately, an individual error has cost us the tie in a game we were relatively comfortable in and looked like we were going through in.

“We are exceptionally disappointed not to be in the next round, especially with the goal we conceded and the chance we had to win it on penalties.”

Airdrie are also in action on Tuesday when they host Alloa in a match rearranged due to the club's Covid outbreak.