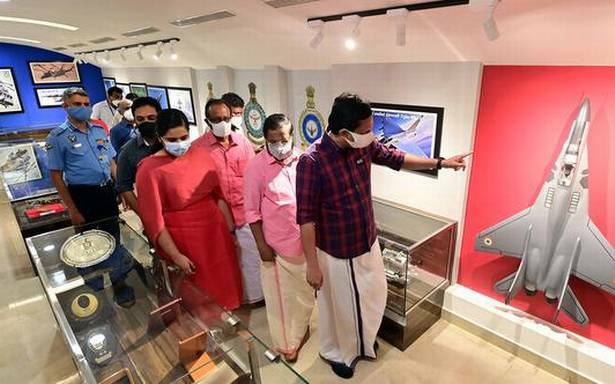 Tourism Minister P.A. Mohamed Riyas on Friday inaugurated the Air Force Museum set up by the Department of Tourism with the technical support of the Indian Air Force (IAF) at the Akkulam Tourist Village here, coinciding with the 89th Foundation Day of IAF.

Built at a cost of ₹1.97 crore, the museum takes the visitors through a simulated flight experience and has several other features.

“This project will be beneficial not only for Akkulam and the capital district but for Kerala Tourism as a whole. The museum gives an opportunity to know more about Indian Air Force. The aircraft-model museum and the flight engine will be a novel experience for visitors,” Mr. Riyas said in his address.

The Minister said the caravan policy recently announced by Kerala Tourism had opened a new front offering immense possibilities. “The caravan parks will generate employment for local people. The Government will extend all support like quick approvals for electricity connection for setting up caravan parks. Caravan Tourism will also provide plenty of opportunities for local artistes to perform before tourists, earn income and sustain art forms”, Mr. Riyas said.

In his address, Air Marshal Chalapati said, “We have two objectives in establishing the museum. One is to make it highly attractive to visitors and the second is to motivate the youth of Kerala to join the IAF. The flight simulator installed here will give a realistic experience for visitors.”

Kadakampally Surendran, MLA, presided over the function. Spread over two floors, the museum of aircraft models has several features including a flight cockpit model with simulator. Photographs depicting the history of IAF and an exhibition of IAF machinery are other features.

Mayor Arya Rajendran and Tourism Director V.R. Krishna Teja were among those present.