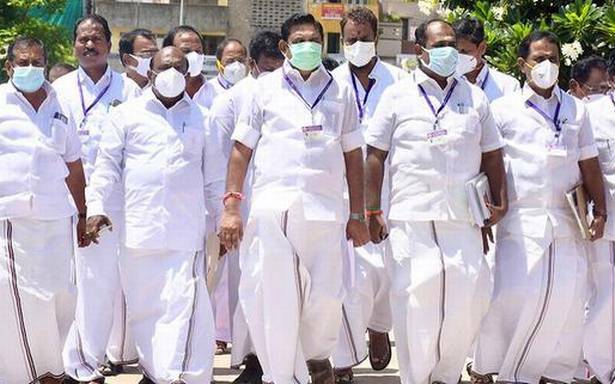 The AIADMK on Wednesday staged a walkout from the Assembly, ahead of voting on the resolution against CAA, citing the DMK government disbanding a number of projects implemented by the AIADMK regime.

Speaking to the media after the walk out, the Leader of the Opposition and former Chief Minister, Edappadi K. Palaniswami, said the party wanted to raise the issue of the DMK disbanding a number of schemes launched by the previous government.

“We had got permission, the Governor’s assent and finalised a Vice-Chancellor for the Dr. J. Jayalalithaa University in Villupuram, but elections were announced and we could not proceed because to that. The DMK government is now merging the university with Annamalai University solely because it has Amma’s [former Chief Minister Jayalalithaa] name,” Mr. Palaniswami said.

He said Villupuram was a backward district and the university would have given poor students in the region an opportunity to get quality higher education. “But even this aspect was not considered by the DMK,” he said.

Mr. Palaniswami said the DMK government had removed the ladder from Jayalalithaa’s statue on the Higher Education Department’s premises, on Kamarajar Salai, and this was preventing people from garlanding it.

“We wanted to raise these issues. But the Speaker did not allow it. He also expunged whatever we spoke,” he said.

Mr. Palaniswami added that the DMK government had introduced a number of conditions for the ‘Thaaliku thangam’ marriage assistance scheme.

When asked about COVID-19 cases in schools, Mr. Palaniswami said the government should tread carefully on the issue.