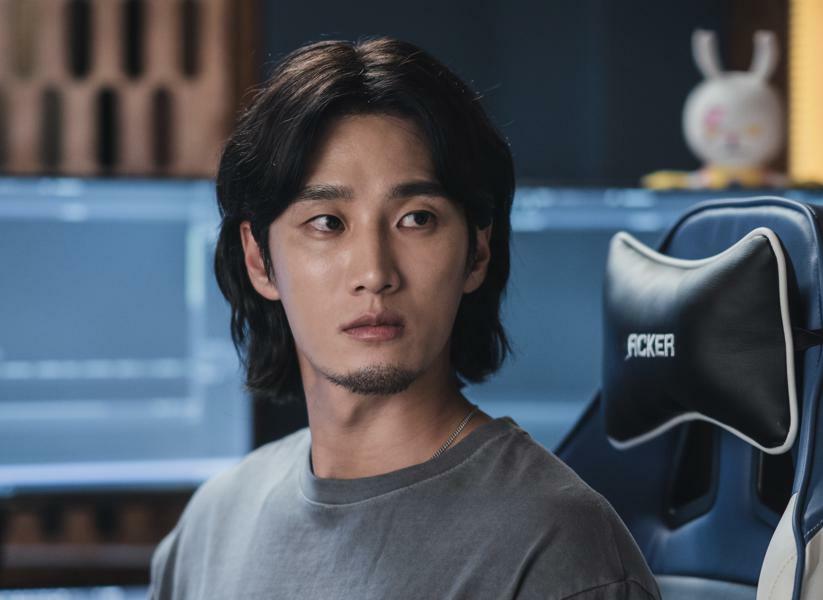 Yumi’s Cells, the Korean drama based on Lee Dong-gun’s popular Naver webtoon, will not be Ahn Bo-hyun’s first webtoon-based drama. However, it will be his first time playing a leading man in a k-drama romance.

“It wasn’t my first time playing a character based on a webtoon because I had played Jang Geun-won in Itaewon Class, but I felt a lot of pressure because Yumi’s Cells is a very popular work,” said Ahn. “It wasn’t easy for me to portray Ku-woong because I had never acted in a romantic comedy before.”

He has character in a romantic comedy only a few years ago, but only as Park Min-young’s friend in Her Private Life. Being the leading man in Yumi’s Cells provides better odds of engaging in an actual romance.

“All the characters I played so far usually had crushes,” said Ahn. “Ku-woong is different from those characters in many ways. In Yumi’s Cells, I’ll be showing many new sides. I can’t tell you more because I don’t want to spoil anything, but please look forward to it.”

In Yumi’s Cells, Yu-Mi, played by Kim Go-Eun, is a single woman, who finds it difficult to express her feelings. Cells in her brain express different emotions and help her figure out how she feels. It can be a complicated process. The psychological romance ran for five years and had over three billion views, making it one of Naver’s most popular webtoon series. Since fans have high expectations of any adaptation, Ahn worked hard to create a character that would resonate.

“In the case of a drama based on a webtoon, I consider the level of similarity between the two to be important,” he said. “I wanted to naturally connect the webtoon’s Ku-woong with the drama’s Ku-woong, and after much consideration, I was able to create my own version of the character.”

Stills of Yumi’s Cells reveal a character who looks quite different from the bleached blonde bully Ahn played in Itaewon Class or the loyal sidekick he played in Her Private Life. Ahn was attracted to the role of Ku-woong because of his character’s charm and sincerity.

“Ku-woong is a straightforward man who only loves one woman and only thinks about what he likes,” said Ahn. “In a way, he may seem frustrating and you might wonder why he acts the way he does, but that shows that he is a pure and honest character. He does his best in what he likes and he is sincere. I think that’s his biggest charm. I tried to portray the images that come to mind when people think of Ku-woong, such as his beard and long hair. I believe this will help the viewers be more immersed in the drama and enjoy it.”

Whether he’s creating a villain or a more sympathetic character, the process is similar and the results convincing.

“I try to become the character. In order to focus on and empathize with the character, I tried to become him as much as possible by making up stories about his past and looking for similarities between him and me,” said Ahn. “In the case of Nam Eun-gi in Her Private Life, he was so similar to me that I was able to portray him naturally. Jang Geun-won in Itaewon Class was an antagonist, but I made a narrative of the character by coming up with reasons why he could only grow up like that.”

Early in his career Ahn failed more than a few auditions, but he didn’t let himself get discouraged.

“Because I wasn’t young, I had to invest more time and effort than others,” he said. “I thought it was only natural to fail in auditions, and the many failures and wounds were a good stimulus and driving force for me to continue to take challenges. I was able to do my best in every audition because I had already hit rock bottom and had nothing to lose. And at that moment, my focus was on growing slowly, step by step, rather than succeeding.”

Since making his acting debut in 2014, Ahn has created memorable characters in a series of dramas that also includes Descendants of the Sun, Dokgo Rewind and Kairos.

“I was lucky to work on great projects and I’m grateful for that,” he said. “Yumi’s Cells is also a great project.”

The Studio Dragon production will be the first Korean drama to combine live-action and 3D animation.

“I believe the viewers will find the combination of live-action and animation especially refreshing and enjoyable,” said Ahn. “I’m also looking forward to the viewers liking and sympathizing with each and every cell of Yumi and Ku-woong.”

Ahn’s next project is the drama My Name, which also stars Han So-hee and Park Hee-soon.

“My Name is a Netflix original series where the main character Ji-woo becomes an undercover member of a crime organization and infiltrates the police to avenge and reveal the secrets behind her father’s death,” said Ahn. “The drama depicts the harsh truth revealed in the process. I play Jeon Pil-do who is an intense and masculine drug investigation detective, and a man of principle. He suspects Ji-woo, who has secrets, but works with her as her partner. I’ll be able to show you an action noir that’s new and different.”

My Name, which is slated for release in October, will be screened at the 26th Busan International Film Festival in the newly created On Screen section.